Company
Book by George Furth
Music & lyrics by Stephen Sondheim
Directed by John R. Leffert
Reviewed by Carlos-Manuel
Copyright © 2013 Carlos-Manuel. All rights reserved.
Stephen Sondheim is, without a doubt, one of the finest composer/lyricists currently writing for the American musical theatre. Each of his works has become a staple of the American musical, praised by most theatre professionals as the highest artistry in musical theatre. There is a reason for this.
Not only does Sondheim write clever, witty, sophisticated lyrics, but he also places such lyrics on the musical scale with a purpose. Sondheim doesn’t just create music, but arranges the musical notes in a way that such notes have a meaning that directly affect the character’s state of mind, thus showing to the audience how the character feels at any given moment. The results are, for any musical theatre actor, that singing Sondheim’s songs aren’t a walk in the park.
This is the challenge every theatre company faces when producing any Sondheim musical. And such was the case for CenterStage at The Jewish Community Center who opened its fourth show of the season this past Thursday, January 10.
With a very slick and very modern white set design by John R. Leffert and a very beautiful and colorful lighting design by Theresa Bagan, an ensemble of 14 actors entered the stage to demand our attention and deliver the well-known yet very difficult score. And as the story develops and the songs are sung, we are presented the story of Bobby, a single man who is celebrating his 35th birthday with his “good and crazy married friends.”
Bobby (played with much charisma here by Mike Fryman) lives by himself and has not been able to connect in a long-term relationship. He isn’t alone, though, for he knows five married couples who are all friends, and he also has three different girlfriends. Through Bobby’s eyes, and a series of vignettes, we have the opportunity to see the dynamics of these characters. We not only see the “happy and perfect lives” of such couples and single people but also the challenges they face, thus giving Bobby the chance to figure out that while no relationship is perfect, having a relationship of any kind is necessary to be a happy person and as part of being alive.
CenterStage’s ensemble, under the direction of Mr. Leffert, for the most part do a wonderful job with the series of vignettes and the many single, duets and ensemble songs. And while there were a few sound glitches, lighting mistakes and line delivery mishaps, I will attribute these minor inconsistencies to the infamous “opening night jitters.”
I must say, though, that the one thing I did not enjoy about the production was the fact that the musical score was presented slower than originally intended. And whether this was intentional or not, it contributed to the lack of energy on stage, especially in the first act. I, personally, would not have been bothered by the slower tempo if it wasn’t for the fact that Sondheim’s music is written in a certain way for a certain reason, which to me meant that the insecurity, turbulence and confusion Bobby is experiencing while trying to figure out his single life is a little lost. After all, Company is Sondheim’s first non-linear “concept” musical, and the force that drives such concept is the music.
The biggest travesty in this production, however, is the song “Another Hundred People,” which is a song about the hustle and bustle of New York City. This song epitomizes the challenges of finding companionship in a big city like New York because one is always in a rush, always coming and going, living a fast life, and hardly stopping to take a moment to breathe. The song is written with a fast tempo, an almost overlapping staccato, and with a settled yet noticeable crescendo that symbolizes New York City’s fast life. Yet, as performed by Kate Nuss as Martha, the song loses its purpose and the entire sequence, unfortunately, loses its meaning.
And yet, the show seemed to entertain many of those who attended the opening night performance, especially when Lauren McCombs as Amy – once again doing a wonderful job as a neurotic character – sings “Getting Married Today,” and when Jason Button as David and Margot Wooldridge as Jenny play the married couple who get stoned with Bobby.
The energy picks up in the second act, and to see Mera Kathryn Corlett as April playing opposite of Mike Fryman is a delight. She is sweet and innocence, yet funny and mature. Yet it isn’t until “The Ladies Who Lunch,” sung by Jill Higginbotham as Joanne, where we finally get to see some of what Sondheim intended. Ms. Higginbotham delivers the song with the bitterness and comfort that life has to offer. This is the “eleven o’clock” song of the musical, and Ms. Higginbotham does not disappoint.
Overall, CenterStage’s production of Company is a delight with moments of entertainment and charm, mainly because the fourteen-member ensemble commits itself to the task. The ensemble is mostly filled with talent, and the casting of the show is almost perfect, presenting us with actors who have perfect chemistry, especially as couples.
Besides being a musical theatre genius, Sondheim is also a music and lyricist sadist, taking pleasure in challenging singers, actors and audiences. It takes a theatre company willing to serve Sondheim’s sadism themselves to tackle the challenges of such a great composer. This is not easily accomplished, but it is always fun to see artists try.
CenterStage does its best, and for that I applaud them. Their production of Company is worth seeing because each actor truly delivers, even against the slow musical tempo. And to me, that is what it’s all about, because despite the minor flaws, this company of actors works hard at making us part of “Being Alive.”
Company
January 10-20
CenterStage at The Jewish Community Center
3600 Dutchmans Lane
Louisville, KY 40205
502-499-0660
jccoflouisville.org 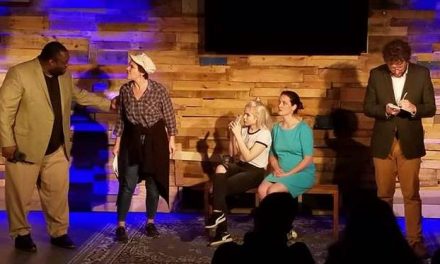