9 TO 5: The Musical
Music and Lyrics by Dolly Parton
Book by Patricia Resnick
From the Screenplay by Patricia Resnick and Colin Higgins
Directed by Lee Buckholz
Reviewed by Craig Nolan Highley
Entire contents are copyright © 2013, Craig Nolan Highley. All rights reserved.
On Friday night I had just about the best time I’ve had watching a live show in recent memory. Derby Dinner Playhouse has outdone themselves with their current offering, 9 to 5: The Musical. Say what you will about the recent trend to turn seemingly every successful movie into a Broadway musical, but when it works, it works. And that is proven here in spades.
It’s based on the 1980 comedy film that made Dolly Parton a star. Dolly herself wrote the songs that make up its jubilant score, and her fans will recognize her distinctive stamp on every musical number. The show tells the story of three secretaries in the late 1970s (at the height of women’s lib), and their battles with their sexist pig of a boss.
The show gets off to a slightly rocky start with an opening number that has just too much going on, but it more than makes up for it as the show progresses.
The cast is just amazing, starting with our three protagonists. As Violet, Jillian Prefach brings the character a no-nonsense quality but with a more grounded vulnerability than Lily Tomlin had in the film. Elizabeth Bailey nicely channels Dolly as Doralee, without going for a full-on impersonation; her heartfelt rendition of “Backwoods Barbie” is a definite highlight. But by far the standout was Sarah Ann Koster as Judy; you will forget Jane Fonda ever played the role; Koster has made it her own in a spectacular performance, culminating in the show-stopping ode to female empowerment, “Get Out and Stay Out.”
There is also some nice work by Matthew Bryan Feld as the main protagonist Mr. Hart. He fares much better here than he did as the dentist in the DDP’s previous production, Little Shop of Horrors. This time he does not hold back in creating a slimy villain, really sinking his teeth into his sleazy, “Here for You” number. (Oddly, the Broadway production gave Hart a second act number, “Always a Woman”, which is missing from this production. I’d be curious to know if it was cut before it was licensed or just cut from this production.)
Another standout is Elizabeth Loos as Roz, Hart’s office spy who happens to hold an unrequited lust for him. She creates quite the no-nonsense buttoned up woman of propriety, until she really vamps it up when she makes her true feelings known in the “Heart to Hart” number.
The rest of the cast all play multiple roles, with some nice turns by Ricky Cona as Violet’s son (slightly creepy since he and Prefach just played lovers in Little Shop of Horrors on the same stage), and Derek Basthemer as Joe, a character created for the musical and a love interest for Violet. Sadly, Alex Craig’s entire performance as Judy’s ex-husband Dick was lost to a malfunctioning body microphone that made him sound like Darth Vader talking through white noise. Hopefully that will be fixed in subsequent performances.
Heather Paige Folsom’s choreography was amazing and exhausting to watch, especially in the big numbers like “Around Here” and “One of the Boys”. The opening “9 to 5” number, as I stated previously, was a bit too crowded and I couldn’t quite tell what was going on during the various scenes that were playing throughout it. But other than that it was all very amazing.
Finally, I have to comment on director Lee Buckholz’s set design and the amazing set pieces used to create, among other things, Hart’s very-seventies office décor. It was incredible how these pieces were moved on and off so smoothly.
If you are a fan of the original film, a fan of Dolly Pardon’s music, or just a fan of great musical comedy, this show is a must see. Check it out before it’s gone!
Starring Elizabeth Bailey, Derek Basthemer, Kyle Braun, Matthew Brennan, Brittany Carricato, Ricky Cona, Robert Conte, Alex Craig, Matthew Bryan Feld, Lem Jackson, Sarah Ann Koster, Elizabeth Loos, Annette McCulloch, Jillian Prefach, Kate E. Reedy, Sandra Rivera, Carly Stotts, John Vessels, and Tina Jo Wallace.
9 TO 5: The Musical
April 2 – May 19, 2013
Derby Dinner Playhouse
525 Marriott Drive
Clarksville, IN
812-288-8281
derbydinner.com 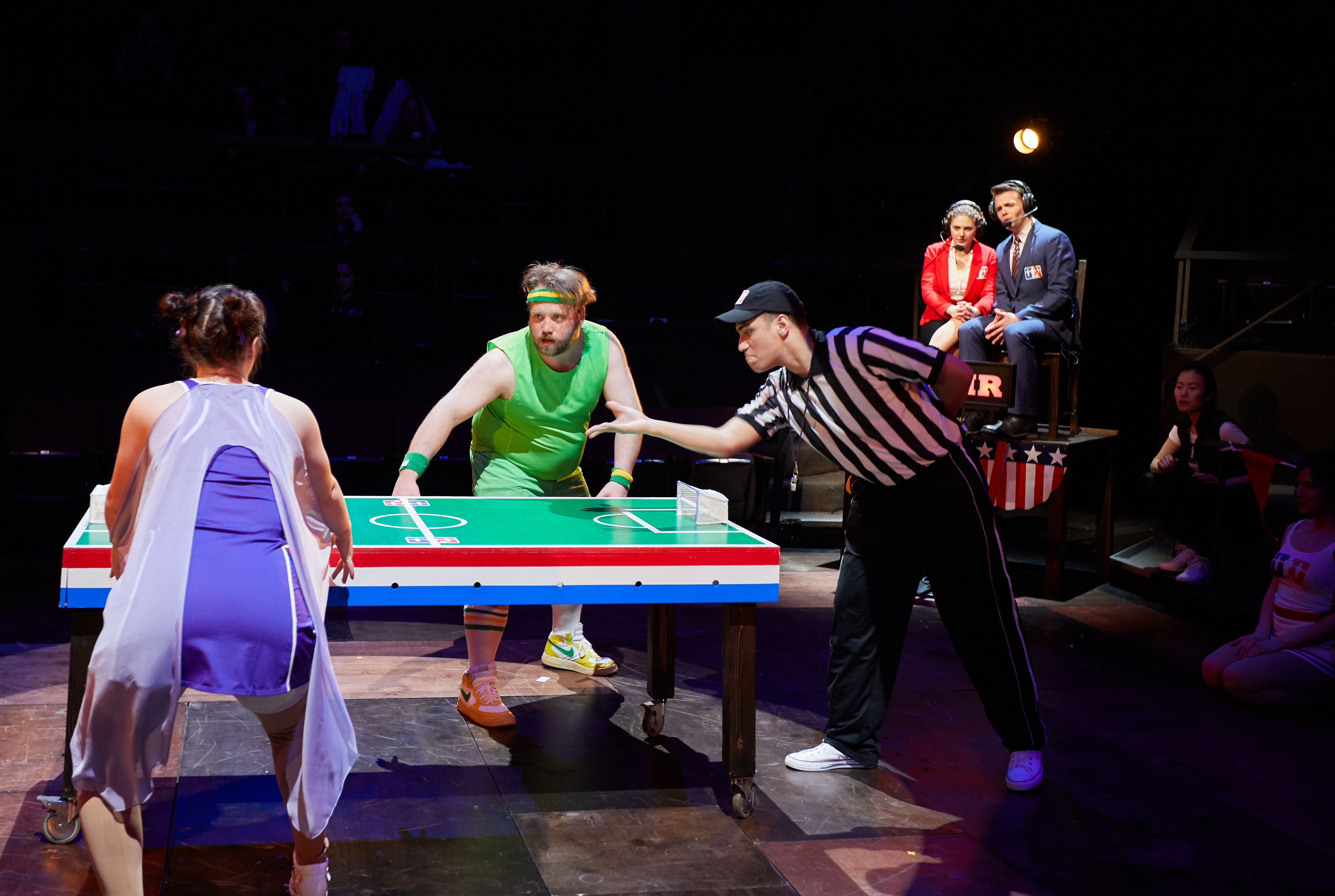