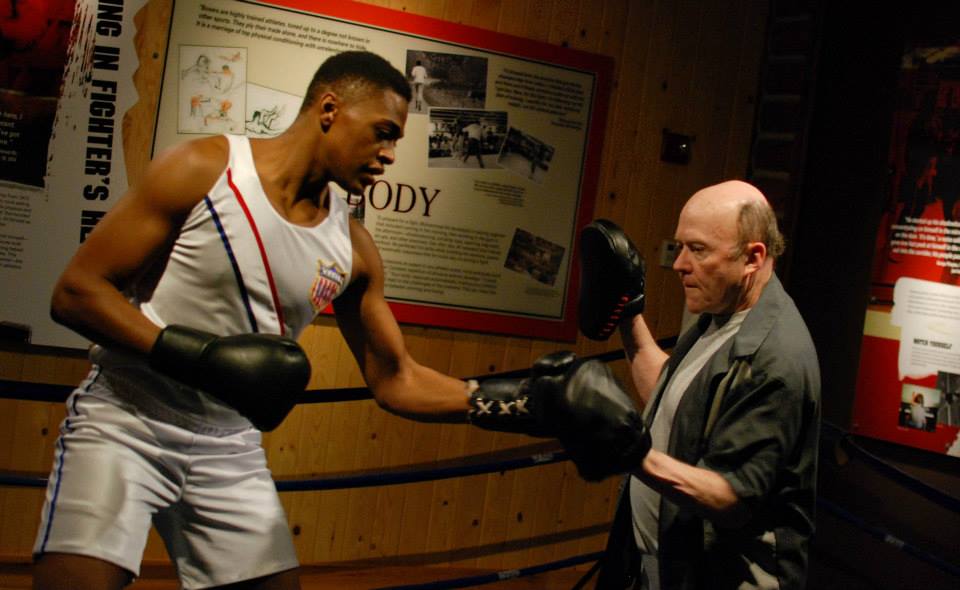 Muhammad Ali has been called the most recognizable celebrity in the world, meaning there is nowhere he could go that people would not know his face. Now playwright Idris Goodwin dramatizes key moments from his youth in this new play, commissioned by Stage One Family Theatre and given its world premiere on The Champ’s 73rd birthday.

The script covers some familiar ground in detailing young Cassius Clay’s training under the tutelage of police officer Joe Martin (William McNulty, Jr.) at the Columbia Gym, and his triumph at the 1960 Rome Olympics, but it fleshes out the history with succinct but assured characterizations of his parents (Cedric Mays & Ebony Joy), younger brother Rudy (Crystian Wiltshire), and good friend Eddie (Rejinal Simon). Cassius Clay, Sr. is given the most credit for inspiring his son, and Mr. Mays’ performance is a study in understated impact.

There is also good fun derived from young Clay’s stand-off with a local bully named Corky Baker, played by a vivid and funny Robert N. Isaac. Isaac bears some resemblance to Joe Frazier, giving their pairing the effect of foreshadowing that titanic rivalry from later in Ali’s life.

A good deal of question arises about Clay’s seeming indifference to the racial segregation that still ruled Louisville in the 1950’s. He famously responded to the problem with an act of protest that is positioned here as the climactic moment of the play.

And In This Corner… is designed for a young audience but achieves a meaningful balance in its appeal that makes the narrative equally compelling for adults. Much of the staging is executed in simple but effective terms, with some larger, more dazzling stagecraft appropriately placed in the play’s bigger moments, aided immeasurably by Drew Fracher’s fight choreography.

Absolutely essential to the play’s impact is Justin Cornwell’s performance as Cassius Clay. An impersonation would be very tempting, but Cornwell avoids that trap with a highly charismatic rendering that captures all of the cocksure personality we associate with Ali balanced with a developing self-awareness that points to the controversial man of conscience that will become legend.

Brian Barber is also on hand as a utility player and steps into the square circle as Zbigniew Pietzykowski, the Polish champion who was Clay’s opponent in the Gold Medal bout in Rome. Leah Michelle Roberts is a fine second utility player given little to do, but she does it with skill.

And In This Corner…Cassius Clay is a strong play given a first-class production by Stage One, yet it is also so much more, as any attempt to tell Muhammad Ali’s life must. It views him firmly within the context of his time while emphasizing his humanity. It deserves its place among the wealth of literature on ‘The Greatest’ because it is one of the most insightful examinations into the life of Ali.