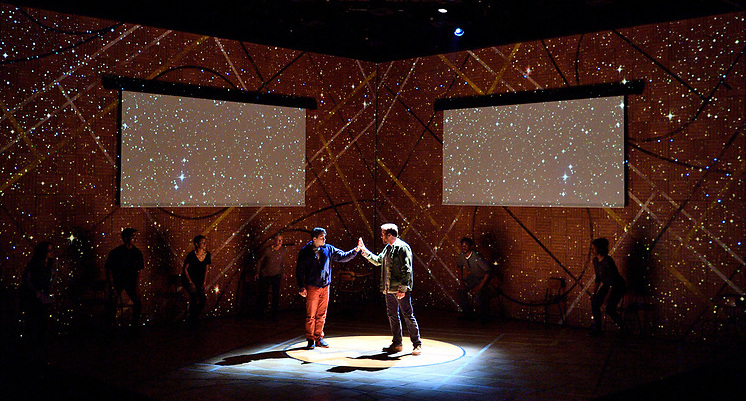 Alexander Stuart and Brian Slaten in The Curious Incident of the Dog in the Night-Time, 2018.

Philip Allgeier became the Media Technologist for Actors Theatre of Louisville in 2008. Since joining the company, he has designed media for over 50 productions, including many world premiere productions in the Humana Festival of New American Plays, such as The Christians, The Glory of the World, and The Hour of Feeling.

1. What shows were you doing/about to do when the shut down began?

When the shutdown started I was in the hospital with my wife having our second daughter. By the time I got back to the office, many of my friends and coworkers had already been laid off.  We had just opened a show that I designed media for called Are You There? directed by our executive artistic director Robert Barry Fleming. As it turned out, our opening night show was the sole performance with an audience before the shutdown. I had worked on the other Humana shows from the marketing side – promo videos, rehearsal photos, videos for our lobby displays, etc, so even though I personally only designed one show in the festival I felt the loss of all of them.

2.  You are a member of the ATL production, design, AND marketing teams. Which of those roles most dominates your schedule?

Honestly, it depends on the season. In the 2019/2020 season, I designed media for three shows, which was probably the lightest production season I’ve ever had so my percentage of video work for marketing, education, and the other departments went way up.  For comparison, I designed media for nine productions in the 2018/2019 season, so my availability to work on other projects was much more limited. Part of my job includes working with the other departments to maintain a realistic workload given the time and resources available on any given week, and that’s constantly in flux.

3. How has the use of media technologies in live theatre changed in the last ten years?

I’d say the biggest change is that high-quality projection and playback technology have become more cost-effective and user friendly.  It’s a little wild to think about it, but when I started in 2008 a computer that would smoothly play an HD video file was incredibly expensive.  Hardly anyone had smartphones, YouTube had only been around for a few years, and the transition to digital photos and video was still in its early days.  So back then, if you wanted a big high-quality video element in your production you were spending five or ten times what it would cost now (in both money and time). For that reason, smaller theaters and theater companies have recently been able to experiment with this technology to enhance their productions without breaking the bank.

4. And what about the future? Could digital tools start to change the live performance experience in negative ways?

There’s a fine line with video projection in theater where the video can become more important than the show itself, and that’s an issue I always try to keep in mind when designing. A media element should support the storytelling, rather than take it over. I’ve seen media designs that pulled focus from the actors or added confusing or unnecessary information that made the story harder to understand. Ultimately, it’s our job as designers (media or otherwise) to put the show and the story above our personal desire to do something impressive. That’s not to say that we shouldn’t try to knock people’s socks off – just to realize that we’re only one part of a larger mission.

5. When theatre returns, how do you imagine will it be different?

This pandemic is going to change live entertainment for the foreseeable future.  The venues and organizations that produce live shows are going to have to put the safety of the audience first.  They may require that everyone wear masks, leave some seats intentionally empty to allow for social distancing, or ramp up cleaning & disinfection efforts.  In the theater world specifically, we are going to see more online offerings, such as what Actors is doing with Actors Theatre Direct.  It will be a different landscape for a while, but we’ll get through, and be stronger for it.

6. What has been your favorite show to work on?

I guess I should say that they’re all my children and I love them equally, but there have been some exceptional experiences in the mix. Actors did The Elaborate Entrance of Chad Deity in 2012, directed by KJ Sanchez. It was a show about professional wrestling, and we had four huge projection screens, a live camera operator, we used green screens to produce these crazy entrance videos for all the wrestlers in the show, and overall we just had a great group of people working on it that really gave it everything they had. I have fond memories of so many shows  – Meredith McDonough directed The Curious Incident of the Dog in the Nighttime last year, and I was really thrilled with how it turned out. I loved working on The Christians and At The Vanishing Point with Les Waters. There are just too many to name.

7. What shows are on your bucket list from a production perspective?

Working at Actors with the Humana Festival, there’s such a focus on new works. I love working on a show that’s never been done before – to be in the room as it takes shape and to be there the very first time an audience gets to experience it is so exciting, and scary, and gratifying. So I guess everything on my bucket list is still in development.

I have. I’ve designed several shows at Actors that were then produced at other theaters across the country. I’ve taken shows to Portland, Syracuse, New York, & Los Angeles. Prior to working at Actors, I worked on shows for SeaWorld in Orlando and San Diego, and I worked for a production company for a while that had me doing technical video for concerts and corporate events all over the US.

Louisville loves the arts. We’re not the only city in the US that supports its artists, but any list of art-loving towns should have Louisville in the top 5. I also appreciate the ability to have an art-centric career without the pressure of paying New York rent prices.

Also, it’s not music, but I just finished re-watching all the Star Wars movies with my eight-year-old daughter Audrey. We started with the original trilogy, then prequels, then the new movies (as it should be).

There are four, all in various stages of reading. A Fire Upon the Deep by Vernor Vinge, Shantyboat by Harlan Hubbard, The Left Hand of Darkness by Ursula K. Le Guin, and The Electric Kool-Aid Acid Test by Tom Wolf.

Visiting my friends and family that live out of town. But first, eating my weight in chips and salsa at the closest Mexican place available. 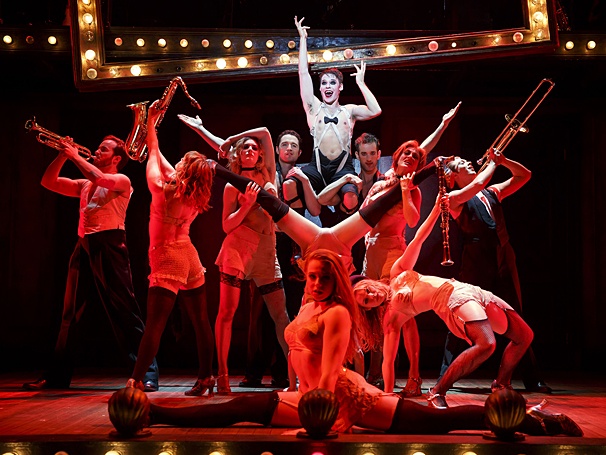