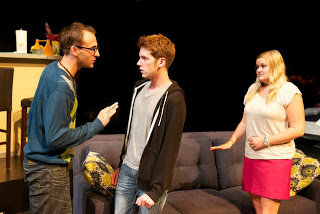 Rabbit Hole
By David Lindsay-Abaire
Directed by Gilmer McCormick
Reviewed by Craig Nolan Highley
Entire Contents Copyright © 2013, Craig Nolan Highley. All rights reserved.
There are certain subjects that, as a society, we just don’t like to dwell on. Injustice and cruelty, sure. But probably nothing tops the list like our own mortality. Humans are cursed with being the only living beings on earth that know their days our numbered. But even more unthinkable, especially to any parent, is the death of a child.
And that’s the cloud that hangs over every character in David Lindsay-Abaire’s Rabbit Hole, a play that examines how grief, loss and guilt can destroy a family. Centering on a young married couple coping with the accidental death of their 4-year-old son, it tells the story of a devastating loss that effects not only the parents, but also the child’s extended family; and, arguably most of all, a teenager driving a car in the wrong place at the wrong time.
The play’s history is a successful one: first presented at the Pacific Playwrights Festival reading series in 2005, it went on to premier on Broadway in 2006 with a cast including such greats as Cynthia Nixon, John Slattery and Tyne Daly. It won the Pulitzer Prize for Drama in 2007 and Nixon won a Tony Award for her portrayal. In 2010, a very well-received film version was released, adapted by Lindsay-Abaire and featuring Nicole Kidman, Aaron Eckhart and Dianne Wiest.
It comes to Louisville at the Mex Theater in The Kentucky Center, presented by Kids Acting Against Cancer, a theater group comprised mostly of college-age performers and production crew and whose profits benefit cancer research. And from what I’ve seen, it’s their best production yet!
There is not one weak performance in the cast of five; these are a group of solid actors who make these characters real and even manage to find some well-needed humor in the proceedings. And that is no easy task with such heavy material.
As the grieving parents, Whitten Montgomery and Remy Sisk have the most difficult roles, and their emotions truly run the gamut. Alternating between trying to move on and clinging to their child’s memory, they give two truly heart wrenching performances. Much appreciated comic relief is provided by Holly Griffitt as the mother’s increasingly pregnant sister, and by Janice Walter as a very opinionated and no-nonsense grandmother. And as the guilt-ridden teenager responsible for the tragedy, Charlie Meredith tugs the heartstrings with his gravitas-laden portrayal.
Just really solid acting work all around.
I should point out that the performance I attended was actually a dress rehearsal, not a performance with an audience; but while there were a few technical issues that needed to be worked out, as a whole I was engrossed from beginning to end. As directed by Gilmer Montgomery (a Louisvillian who has made it big, having appeared on Broadway and in film, most notably creating her namesake character in Godspell), the show maintains a brisk pace and never gets bogged down.
Special mention goes to the set designers and constructors, which included actors Remy Sisk and Whitten Montgomery as well as Bob and Alex Sisk. They managed to create a very realistic depiction of a New York apartment (complete with a working refrigerator!). There is also some nice work with the lighting design by Jesse Alford and sound design by Remy Sisk and Charlie Meredith (although there were a few technical hiccups at the dress rehearsal). Overall, the show is as technically solid as its performances.
It’s not an easy story to take, as the death of a small child hangs over every line and nuance; but by the end it is a moving treatise on grief and moving on. Not every family has had to endure such a horrible event as the one presented here, but we have all had to deal with grief and can find the plight of these characters very relatable.
In closing, let me reiterate that KAAC donates 100% of the profits of each production to cancer research. In this case, the proceeds will be split between Kosair Children’s Hospital and the Pediatric Cancer Care Center in Ulaanbaatar, Mongolia. So see a very solid theater production and benefit a worthy cause while you’re at it.
But bring tissues! You’ll need ’em.
Featuring Holly Griffitt, Charlie Meredith, Whitten Montgomery, Remy Sisk and Janice Walter.
Rabbit Hole
Friday, September 6 – 8 p.m.
Saturday, September 7 – 8 p.m.
Sunday, September 8 – 2 p.m.
Friday, September 13 – 8 p.m.
Saturday, September 14 – 8 p.m.
The MeX Theatre in
The Kentucky Center for the Arts
501 W. Main Street
Louisville, KY, 40202
All tickets $16, general admission
Online: http://www.kentuckycenter.org/Events/Rabbit-Hole/11044#tab-show-information-link
Phone: 502.584.7777
In Person: The Box Office at the Kentucky Center for the Arts