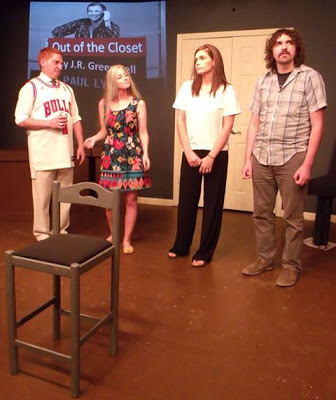 The Ten-Tucky Festival
Various Writers and Directors
Review by Keith Waits
Entire contents are copyright © 2013 Keith Waits. All rights reserved
When The Bard’s Town brags about being a company that focuses on presenting new work, this festival of shorts, now in its third year, is one of the reasons. The program is exclusively Kentucky writers, directors and actors and is giving the Finnigan Festival (also held at The Bard’s Town) a run for its money as the premiere short play festival in town.
Happily, there is room for both, with a healthy enough flow of material and a subtle distinction in the aesthetic between the two. While Finnigan is known for highlighting more offbeat, edgier scripts that are sometimes not for the faint of heart, Ten-Tucky perhaps pulls slightly closer to traditional storytelling. Not that you won’t find outrageousness onstage when you attend. The opening play, J.R. Greenwell’s Out of the Closet (directed by Scot Atkinson), is a bracing bit of satire about middle brow attitudes towards homosexuality (among other things) that features a bold performance by Sean Keller. His transformation from a Ralph Kramden stereotype to his mirror opposite is hilarious. His costars do fine work alongside, but Mr. Keller’s work here is particularly inspired.
A similar theme is explored with a more grounded and naturalistic eye by Brian Walker in Threesome(directed by Ben Gierhart). Mr. Walker is known for pushing the envelope but here explores more subtle observations about intolerance and understanding achieved among neighbors in a crisis. Patrick Brophy, Brian West and Sharon Becher nicely play against the expected cliches.
In Properly Served, by Bill Forsyth (directed by Amy Steiger), Carol T. Williams brings backbone and charm to an elderly woman who is the last hold-out in a neighborhood destined for demolition and then redevelopment as high-end condos. How she turns the tables and applies her own pressure to the mayor and developer is funny and handled well enough, although the piece lacked a satisfying ending.
Just before intermission there was Mark Cornell’s The Rental Company (directed by J.P. Lebangood), a profane and scabrous period piece in which Chris Petty’s unfettered take on Chicago thugs from the early 1970s brings the material to vivid life. Scott Goodman delivers his appropriately cowed victim on nervous terms that match Mr. Petty’s comic viciousness, and the outrageousness on display made for nice mid-evening climax.
Ben Unwin’s Hunting Jackalopes (directed by Nadeem Zaman) would have been better placed as the final piece, so strong and confident is this story of distaff revenge. It starts innocently enough, with two women discussing their boyfriend problems around the campsite, but escalates in two changes to something more than we might have expected. It was lunatic, and for me was the best combination of inspired writing, direction and acting to be found in this program. It boasted the largest cast, with especially good work from Megan Brown, April Singer, Tony Smith and the oddest performances of the night from J.P. Lebangood and Patrick Brophy.
The next play, A Trip to Eden, by Nancy Gall-Clayton (directed by Hallie Dizdarevic) was a contrast in scale and tone, although its premise of a contemporary feminist time-travelling to prevent Eve from listening to the serpent shared the theme of women empowering themselves to seek drastic change. It was a small piece packed with provocative ideas: a heady mix of science fiction and Christian mythology that was a showcase for Polina Abramov as a charming and guileless Eve who seems resistant to the entreaties of her intended savior (a slightly over-emphatic Amy Steiger).
A Day on the Savannah by Gary Wadley (directed by Melinda Crecelius) is a worthwhile idea that works for most of its length but also seems to not know quite how to end. Talia Brown and Ben Gierhart as two birds observing human tourists who have strayed too far from the boat are the life of the piece, with Mr. Gierhart making the most of the better half of their comic dialogue as a fowl with a slight identity crisis.
Finally, Patrick Wensink’s That One Time Eric Clapton Sold His Soul to the Devil (directed by Corey Music) smartly conjures up an intriguing notion that has the famed guitarist (nicely realized by Scot Atkinson) following the fabled path of his idol, Robert Johnson (“Crossroads” anyone?), by selling his soul to the devil to be the world’s greatest guitar player. It’s a funny idea, yet the greater potential might be squandered in the service of a joke that doesn’t play as well as it should. It might be nitpicking, but to locate the scene in 1970, years after “Clapton is God” was common graffiti in London, undercuts the motivation of the character as he appears in this play. Perhaps I am asking too much of a 10-minute comedy that certainly is fun enough, with a sexy temptress of a Devil in a Red Dress (Narina Kasabova) providing no small amount of motivation.
It must be noted that the success of the production owes something to the sense of ensemble that exists among most of these players. Only a few were newcomers to The Bard’s Town stage, and many have worked together in various companies and configurations around Louisville. To witness such a dynamic is perhaps one of the underappreciated benefits of such festivals.
The Ten-Tucky Festival
September 20-23 & 27-29, 2013
The Bard’s Town Theatre
1801 Bardstown Road
Louisville, KY 40205
(502) 749-5275
Thebardstown.com