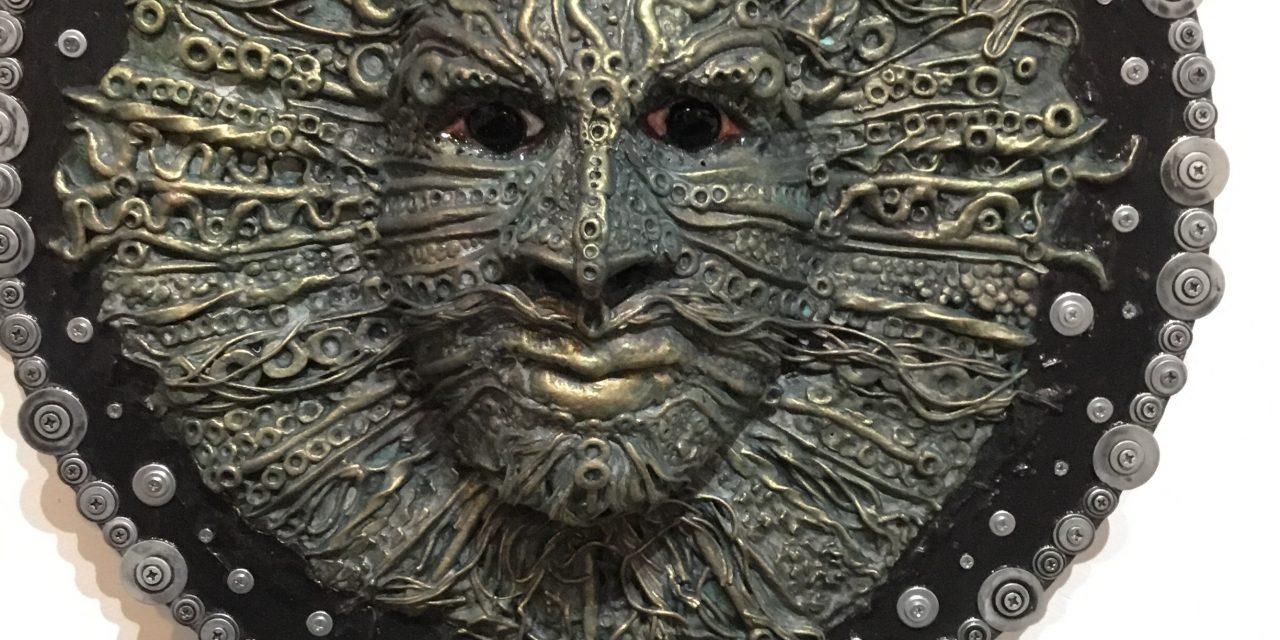 Darkness occupies an essential place in popular culture, the fine and the coarse arts alike. The oldest fairy tales are filled with terrors to teach children about confronting fear, and we embrace the most deeply buried monsters of the Id in literature, film, and television no matter how craftily built with Lovecraftian ingenuity.

This exhibit from Motuvius Rex includes sculptures and two-dimensional work as well as some relief pieces on the walls; a mix of abstract and representational imagery that includes archetypal demons and faces that are reminiscent of ancient iconography. But the deep unsettling motifs included here were very familiar to me through low budget horror movies such as were produced during the heyday of Hammer Films and American International.

Once I finished my initial viewing of the work, the artist’s statement on the wall affirmed that connection. Every community had a local late-night creature feature host, and for this artist growing up in Bowling Green in the 1970’s it was Sir Cecil Creape on WSM in Nashville. He cites that character and the schlock-horror movies featured on his broadcast as an influence. 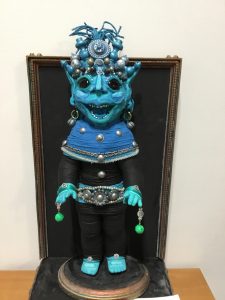 Yet Rex doesn’t emulate those movies but instead reaches back to the foundational background of human terror. The series of “False Fester” figures are icons of preternatural evil, grinning grotesquely in pointed mockery of common human decency. The colors are intense trim overlaid on dark-hued bodies, garish icons to the allure of the heart of darkness that can seem either innocent or sinister.

They are echoed by reliefs of mask-like faces with expressions focused on sacrificial ceremonies to the gods. All of these twisted countenances reference spiritual context of ancient civilizations, such as the masks worn by priests and found at Mycenae

The paintings include abstract compositions but also pictorial elements that suggest the ruins of the far distant past. In one, a silhouette of what appears to be a contemporary figure surveys a barren landscape from atop a parapet. The image can be seen as simple identification of the Modern Age’s fascination with the elemental social and political strains of our ancestors, the civilized hat and topcoat obscuring the pagan within.

Whatever unrestrained yearnings we find here, the work itself is crafted with discipline and attention to detail that places the observations firmly within the safety of the social contract. I think Motuvius Rex is honoring the long cultural tradition of scaring the bejeesus out of ourselves more than he is calling us to dance with any devils.

Keith Waits is a native of Louisville who works at Louisville Visual Art during the days, where he is Managing Editor of their Artebella blog, and host of LVA’s Artebella On The Radio on WXOX-FM 97.1/ ARTxFM.com. But spends most of his evenings indulging his taste for theatre, music and visual arts. His work has appeared in Pure Uncut Candy, TheatreLouisville, Louisville Mojo, and LEO Weekly. He is now Managing Editor for Arts-Louisville.com. 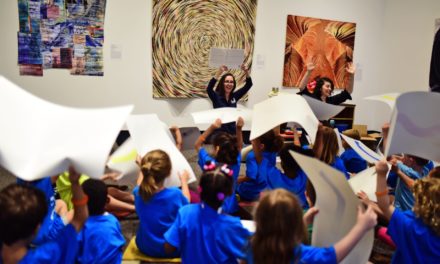