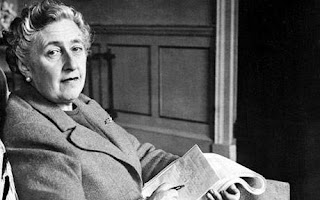 Directed by Amy Lewis Zeigler
Entire contents copyright © 2011 Keith Waits. All rights reserved.
As a kid, I used to love reading mysteries and went through a big Agatha Christie phase that included And Then There Were None, A Pocketful of Rye and the ultimate Christie experience, Murder on the Orient Express. So it seems somewhat inexplicable that I somehow have never encountered this famous play that has enjoyed the longest run in theatrical history: more than 24,500 performances of the original London production that is still entertaining audiences as of this writing.
The plot is a classic set-up: eight characters trapped in an English inn by a blizzard – which one of them is the killer? The limitations make it a natural for the stage, but even more interesting is that The Mousetrap, having been written by Christie after 30 years of celebrity, catches the renowned author playing with the tropes and clichés of the genre she helped create with a calculating and knowing wink to the audience. She hasn’t yet grown tired of them, but she is too self-aware to play it completely straight.
Why else would she have inserted Mr. Paravicini, a patently false character who calls such obvious attention to his dubious nature that he simply cannot be the murderer, if not to gently and humorously parody the audience’s expectation?  Although the script contains as much levity as suspense, this character is so broadly drawn and unresolved that we can only believe a writer of Christie’s discipline created him for such purpose.
Of course, 50 years after it opened, the surprises that have helped make this play famous may have slightly less impact for a modern sensibility. But the time-honored traditions on display in the structure can work wonderfully as nostalgia. In any event, this reviewer will say as little as possible and move on to the particulars of this solid production.
The action gets off to a slow start as the business of introducing characters and circumstance roll out on the nicely detailed set.  Director Amy Lewis Zeigler emphasizes the eccentricities of the characters in these opening moments, letting the story play more like drawing-room comedy than murder mystery – until the introduction late in the first act of Detective Sergeant Trotter, who arrives hot on the trail of a killer. After his arrival, the pace quickens somewhat and real suspense develops, despite it remaining a dialogue-heavy affair. The second act builds the identity of the murderous criminal with more care than one might expect, given the famous “twist” that all are sworn to never reveal. I was pleased that the resolution was lacking in gimmickry and that background was so thoughtfully explicated both in the script and this particular staging.
To talk about individual performances also provides ample opportunity for spoilers, but the work was fairly consistent in tone and the various attempts at British accents were at least never distracting. Each player delivered the goods in terms of providing appropriate red herrings and managed to find the laughs without sacrificing their character’s integrity. Bryce Woodard as policeman Trotter effectively introduced a sense of danger and urgency that quickened the pace, while Steve Zimmerman overplayed Mr. Paravicini in just the right way, with a full understanding that he was not playing a character but instead representing the author’s self-referential inside joke.
Good mysteries onstage are rare enough to make this a must-see for any devotee of the genre, and I cannot remember the last time this play, or any other Christie script, was produced in this area, so beware letting this opportunity slip away.
Featuring Sean Childress, Carrie Cooke, Elizabeth Cox, Michael Roberts, Jennifer Starr Tennant, Frank Whitaker, Bryce Woodard, and Steve Zimmerman.
The Mousetrap
October 26, 27, 28, 29, 31 and November 4, 5 @ 8 p.m.
November 5, 6 @ 2 p.m.
Louisville Repertory Company
The MeX Theatre, Kentucky Center
501 West Main Street
Louisville, KY 40202
502-584-7777
www.lourep.org 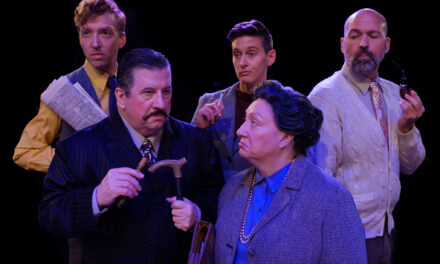