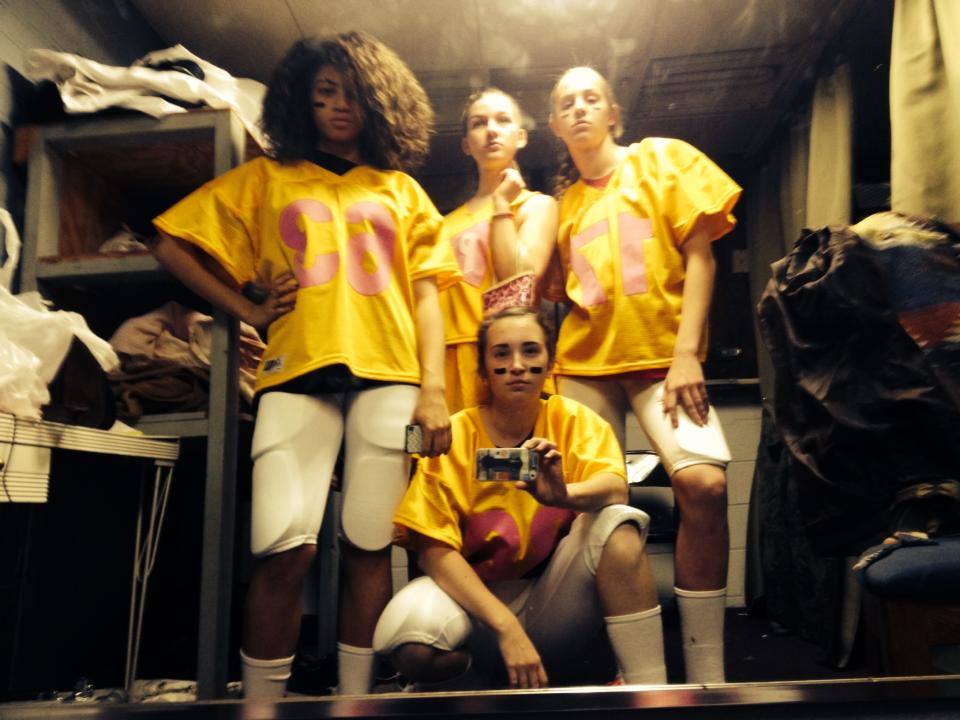 Some of the cast of In the Pony Palace/FOOTBALL. Photo-Walden Theatre.

There sure is a lot of drama in high school sports. The competitive attitude and pressure to succeed alone is enough for theatricality, not to mention the costumes…I mean uniforms. Walden Theater’s current installment of In the Pony Palace/FOOTBALL banishes all stereotypes and assumptions about football as a boys-only game while blurring gender roles within the realm of a seemingly macho sport.

For starters, the staging of this peppy little play is imaginative and fun to watch. The six-piece football team handles the plays, tackles, passes and fumbles with as much energy and agility as a team on actual turf. From quarterback tossing a ball just to run into her teammate’s arms to handing the game ball to an audience member sitting in the front row so the players can perform their play in slow motion, this is a play with moments of silliness that pop up when you least expect it. As Timber, the team mascot, Clara Burton carries a ridiculously large owl face on her shoulders and is quick with a quip as she desperately searches for her lost cell phone before she delivers a monologue about the importance of her position on the team.

Let’s not forget about the cheerleaders, Anneke and Eleanor, played by Lexi Drexelius and Nan Elpers. With pompoms and matching necklaces, Drexelius and Elpers take their peppy responsibilities very seriously. Never missing a beat while cheering “together we can do anything,” Elpers and Drexelius have a firm grasp on how to be funny. There are strong performances within the football team as well. As Sasha Dash, Elise Whitling is a running back who takes every advantage she can to ham it up for anyone who might be watching. As Dara, the quarterback, Zoe Greenwald is a meek leader in an otherwise dominant role. Greenwald performs her part gently without looking weak or timid. As Trace, Taylor Thomas brings persistence and stubbornness as a girl looking to occupy a primary role on the team.

Upon leaving the theater, I was absolutely certain that I have never seen a local play like this before. Complete with local musicians donning pep band attire, headed by Dr. Vitamin’s very own Aaron Craker as well as Lady Gaga musical interludes, this is one unique play. A part of the SLANT Culture Theater Festival happening at Walden Theater, this gender-bending exploration of high school life through the lens of an audacious football team will surely entertain any crowd.