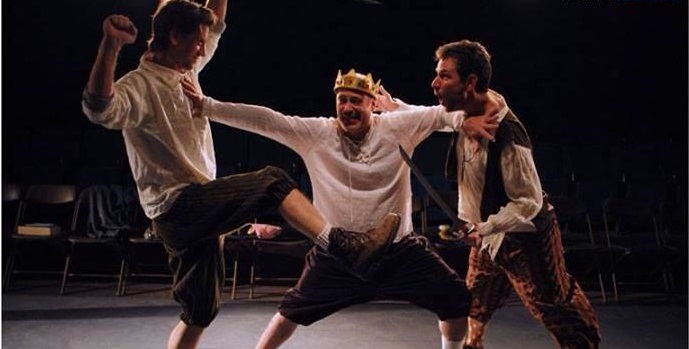 This comic enterprise has been done at various times by various companies around town. But it’s hard to believe anyone could top the relentless attack on the material delivered by these three veterans. Although there is a script, The Alley Theater has made it entirely their own.

That Messrs. Arena, Davis and Lebangood have substantial history together as theatre artists helps explain how adept they are at working together in such fluid fashion. Or perhaps fluidity is not exactly the correct description. While they do pass the ball around with great confidence, as the pace accelerates and the energy turns more and more ferocious, the action takes on a reckless edge that lures you into believing that anything can happen. One imagines that the trio rehearsed by locking themselves in a room for several days, working their way through the script and discovering ways to shove the extremely abbreviated take on Shakespeare’s plays through their own highly individual meat grinder.

It begins with a sit-com-length Romeo & Juliet, presents Titus Andronicus as a cooking show, and translates Othello into a particular musical format with idiosyncratic logic that might never work in any other context. That is perhaps already more than you should know, but it is only a taste of the audacious nature of the style of parody employed here. The approach was developed by the authors during their stint with the Reduced Shakespeare Company, and the company has taken the same approach in other shows concerning American history and the Bible, among others. The denizens of The Alley might be seen as spiritual brothers of the RSC, so potent is the marriage of material and performance.

The text allows for the three performers to incorporate their own personalities and comic sensibilities into the proceedings, and if you are already acquainted with the cast then there are a few extra, “inside” jokes to relish. The material tends toward the adult, but there were a few kids the evening I was in attendance that delighted in the low humor and slapstick, and who were easily roped into the action. It actually requires a good deal of audience participation, which is another reason why it is such a perfect fit for this company.

This show is a highlight of the Alley’s current season and easily one of the most consistently hilarious and most fully realized productions in their recent history. It pushes itself out onto the ledge and clambers around without a net for nearly two hours without ever losing its momentum and truly delivers the goods.