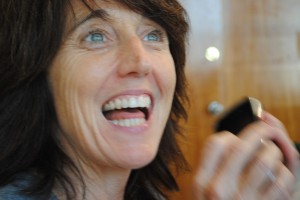 Book by Patricia Cotter, based on her play
Music & lyrics by Lori Scarlett & David Manning
Directed by Jim Hesselman

We have all been there: madly and deliriously in love and then it happens…what you thought was a union of souls turns out to be not quite the same thing for your lover/partner, excuse me, ex-lover/partner.

Helen (Laura Ellis) awakes from her bed alone and sets the mood of the musical with the appropriately titled “Ghost of My Ex-Girlfriend” wherein she sings of the difficulty of moving on from what she considered to be a blissful relationship only to be cast aside for another woman. As with these types of situations she is noticeably distracted at work and her friend Bob (Robbie Smith) stages an intervention to help her cope and move on.

After some time has passed during a conversation with her newly affianced friends Joanie (Jennifer Poliskie) and Monica (Katie Nuss) they convince Helen that maybe it was time to start dating and they introduce her to Sheila (Teresa Willis), a smart yet eccentric attorney who defines herself as bi but doesn’t like to be labeled. Upon their first conversation it was clear that Helen was not ready to date yet.

Being the friends that Joanie, Monica and Bob are they convinced Helen to get her frustrations out and go to a myriad of clubs and bars to circulate from, including a country western bar and a fetish house. While at the fetish house, Helen meets Casey (Maggie Patten), who invites her back to her place for some fun. Let me tell you Casey’s serenade “I’m on Fire” is fun to watch. While Casey is working her womanly wiles on Helen in walks Frances (Kristy Calman), Casey’s temporary roommate. Helen is intrigued but does not pursue her feelings that evening and leaves.

Some time goes by and marriage plans are being made despite arguments and differences of opinion are shared. Also, more advice is given and growth is being seen in Helen, including a chance encounter with the woman for whom her girlfriend left her. After repeated suggestions by her friends Helen begins a romance with Frances.

Eventually, Helen’s friends begin to recognize the pattern and warn her of what’s coming. In the adorable number “The Polynesian Dance,” Helen keeps denying what her friends are sharing with her. She and Frances confront each other and learn that they want different things.

The cast does a fabulous job of portraying multiple characters as assigned and the singing is admirable: not over the top and within each individual performer’s range.

Over all I thought it was a fun evening of musical theater and I could see myself and/or friends in every character that was on stage. I think you will too.