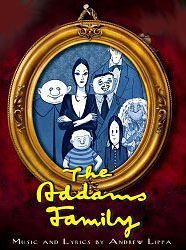 That’s the sound of the overture beginning in the latest production at the Clarksville Little Theater, intended to remind you of a certain 1960’s TV series about a very odd, certifiably macabre family.

The creepy, kooky, mysterious, spooky, altogether ooky clan has been revived in a raucous musical based on the infamous Charles Addams New Yorker cartoons, The Addams Family. And while the property has been adapted before on TV and film, it’s those original one-panel comic strips that this show takes its inspiration from.

In a spooky old mansion in the center of New York’s Central Park, the titular brood enjoy their strange lifestyle amid ghosts and monsters and things that go bump in the night. Nearly all the familiar characters are here: Gomez (Christopher Shiner), his vampish wife Morticia (Candace Kresse), full-of-woe daughter Wednesday (Jenna Lenore Ryan), masochistic son Pugsley (Theo Harrah), Uncle Fester (Jerry Prince), witchy Grandmama (Cindy Smith), and zombie-ish butler Lurch (Gary Crockett). If you are hoping to see Cousin Itt or Thing, you’ll be sadly disappointed (although there is a moment when a disembodied hand opens a curtain).

Our story is set in motion when Wednesday invites her boyfriend and his family, the Beinekes (Richard Ryan, Kathy Todd-Chaney and Brad Green) to dinner, and comedy ensues from the inevitable culture clash.

Similarities to our classic ideas of the characters vary from performer to performer. Shiner is a wonderful actor and gives a truly enjoyable and energetic performance, but his Gomez looks absolutely nothing like either the comic strip or the various famous actors (John Astin, Raul Julia, Nathan Lane) who have played him. Kresse, on the other hand, is the absolute vision of the classic Morticia, and completely disappears in the role. Crockett isn’t quite gaunt enough but still conveys the Lurch character quite well, with his deadpan stares and guttural moans. Paris definitely looks the part of Uncle Fester with shaved head and sunken eyes, and also nails the voice, but he breaks character every time he stops speaking. Smith absolutely nails the ancient (and humorously incontinent) Grandmama. And so on.

The Beineke family fares better since these are new characters and don’t have a half-century of baggage to live up to. Todd-Chaney is adorable as the repressed and formal Alice, especially when a magic potion causes her inhibitions to break down. She’s well matched by Ryan as her buttoned-up husband Mal, who’s destined for a date with a giant squid.

Although there are some differences in the show’s take on the characters compared to the popular TV and film versions, Marshall Brickman and Rick Elice’s libretto still has the feel of a typical episode. The songs by Andrew Lippa are mostly forgettable, but there are a couple of standout numbers whose melodies will stay with you.

Director Kevin Swansey has done an impressive job of wrangling his large cast (which also includes a chorus of ever-present ghosts) and keeps things moving nicely, with a few quite clever touches. I was also impressed by the set, as designed by Swansey with Lisa Cutts and Jack Wilcoxson. It’s a decidedly simple framework, but nicely dressed and very functional as a creepy old mansion. And Sharon Murray Harrah has done an impressive job with costumes, especially with all the period ghosts. My only gripe is that I wish she could have come up with better duds for the Gomez and Wednesday costumes; it would have really helped the actors achieve the iconic look of the classic characters.

If you are a fan of the TV shows or the films, there is a lot to like in this production. It was worth the precarious trip through the I-65 construction to see it. So, “get a witch’s shawl on, a broomstick you can crawl on, and go and pay a call on” The Addam’s Family. (Sorry, I couldn’t resist.)