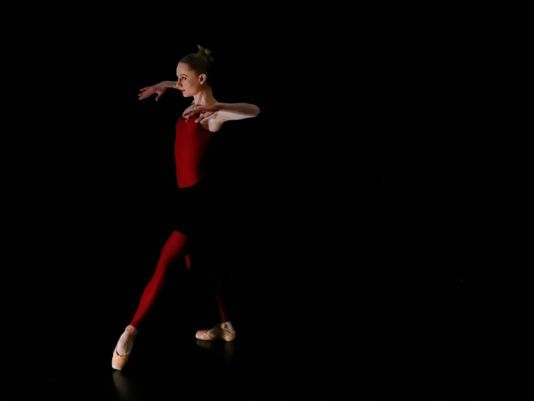 Kateryna Sellers in the 2013 production of Brandon Ragland’s Rumination,
which is included in the current Studio Connections.
Photo by David Toczko

I love the intimacy of performances in the Louisville Ballet studios. The briefer, more eclectic programs provide an opportunity to connect with the dancers in an individual way that underscores the balance of grace and grit in their work.

The evening began with a visceral charge that set a high bar for the work that followed. Zoe Kettering’s music establishes a tense, unsettling tone for company member Brandon Ragland’s Rumination, and the angular, modern movement forcefully echoes this feeling. As the strings build in their intensity, the dance captures snapshots of moves antithetical to classical form, such as frequent use of a kind of sliding demi-plié́. It was a bracing introduction.

Diane & Actéon Pas de Deux was more traditional but still interesting for the contrast between the two figures: Natalia Ashikhmina’s delicate, sylph-like goddess against Brandon Ragland’s raw and elemental masculinity, a balance of the human and animalistic qualities required by Ovid’s myth. It was a suitable follow-up to the modern piece, building transition and providing a pas de deux that showcased two outstanding company members for their personality as much as their considerable terpsichorean expertise.

The short but daring Spring Waters featured bold choreography from Asaf Messerer whose fast pace made the handful of virtuoso leaps and turns seem nearly reckless in their abandon of gravity. Jordan Martin and Mark Kreiger executed the piece with vigor and sharp style. It was a bravura turn whose all-too-brief running time wrapped up the first act with high energy.

After intermission, the longest and most traditional piece of the evening, Marius Petipa’s Paquita was given a passionate presentation that highlighted both the Corps de Ballet and, as Principle Lady, Erica De La O. Seeing the ensemble of as many as sixteen move in unison in the studio space was fascinating in that the uniform precision of the group also allowed for the character of individual performances. An energetic Pas de Trois from Annie Honebrink Kreiger, Jordan Martin, and Benjamin Wetzel was warmly received and then followed by a series of six solos. All were stellar, but Christy Corbitt Miller’s moment came in conjunction with a segment of the score that highlighted what a particularly warm and resonant recording of Ludwig Minkus’s composition we were hearing. Ms. Miller’s performance matched the quality of the score and was a standout.

But the piece mostly belonged to Ms. De La O, who danced with effortless grace and abundant charm. Though partnered with a stalwart Eduard Forehand, it was a true star turn, an expression of joyous energy built on estimable confidence and rendered with formidable technique. A breathtaking sequence of pirouettes in one instant, a masterful command of gesture throughout; it was a virtuoso performance.

Studio Connections delivered plenty of satisfaction for the more informed sensibility of ballet aficionados, but I think it is also a very good introduction for anyone who is not certain if the ballet is for them. The hard working company of the Louisville Ballet is fully capable of engaging both ends of the spectrum. 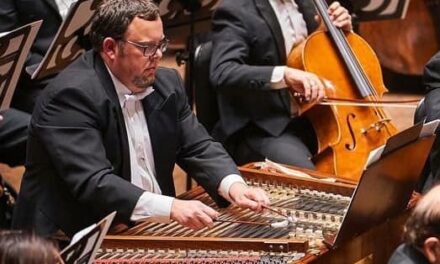