Many years ago I watched a movie at the Chicago International Film Festival called, ¡Vampiros en La Habana!, in Spanish with no subtitles. There was a mix-up and the wrong print had arrived just that afternoon. My friends and I did not speak Spanish but figured, what the heck, we came to the festival to watch films, and so we stayed. We had a marvelous time and found ourselves laughing along with the predominantly Spanish-speaking audience. The simpatico reaction was likely due to the animated film’s reliance on clever visuals and music more than dialogue to tell its satirical story, but the lesson is: language need not be a barrier.

I’ve been to one previous Teatro Tercera Llamada performance, which was, of course, in Spanish. Since I understand so little of the language, I did not review, but it was an interesting exercise gauging how much I could follow of the emotional intention based on the actor’s body language and gesture.

This play, which translates as, Monsters in the closet, Ogres Under the Bed, looks at the events of 9/11 in a poetical narrative enacted by two women (Haydee Canovas and Jomaris Dejesus) who portray various men and women caught in the World Trade Center Towers, their families, and, most significantly, the towers themselves. It is this mix of naturalism and metaphor that gives the material its unique perspective. As a son speaks to his father by phone from inside the North Tower, or a firefighter seeks reassurance from his mother on his first day on the job, our memories of that tragedy inform our understanding of the intimate and personal exchanges. These are affecting moments, but such scenes have been enacted in other dramas about 9/11.

But an unusual device in which the towers are portrayed as “sisters” frames these scenes: North (Canovas) and South (Dejesus). The crashes of the planes are like gunshot wounds in their sides, and they narrate the activity of the humans both in and outside of their bodies. They also speak to each other, sharing the pain and anguish, as twins are wont to do. At first clothed in golden yellow robes with a sense of the ecclesiastical about them, they discard this raiment as the story develops to expose simple white dresses with a distinctive midriff piece. By the time the towers have fallen, the two women are draped gracefully across the pedestals on which the “sisters” had previously stood, in a gesture of utter defeat.

There was some challenge in keeping up with the supertitles at first, in part because this is a language-heavy script. But the English translation (by Canovas and director Jay Marie Padilla) seemed to maintain the verse and poetic construction in good form and it became easier as action and dialogue came into balance with narration.

It mostly works, although there was one lengthy segment that could have been stood some editing. The scene is a touching moment when a man and a woman, strangers, are about to jump from the 99th floor rather than burn to death. After sharing a chaste kiss and words of farewell, they step off into oblivion. Ott then follows the journey of the woman in a monologue that lasted perhaps 8-10 minutes. Although filled with thoughtful and resonant observation, and meant to illustrate the cliché of one’s life flashing by in the final moments before death, to hear the character repeatedly state, “This should only last 5 seconds” only underscores the tediousness of the scene. The problem was exacerbated by having Dejesus flail her arms to suggest the falling motion, blocking that was distracting from the hushed tones of the character’s confrontation with mortality. A still, focused reading would have worked better.

Indeed, one of the great strengths of the production is unquestionably the emotionally sensitive performance of the two actors. Despite a few goofy moments where the elegantly clad women don fire helmets, Canovas and Dejesus transition from reverence to working-class characterizations with aplomb.

There is also a subtle but effective musical score from Jon Silpayamanant, and stark, direct design work in the setting, which includes a judicious use of projected images. Monstruos en al Closet, Ogres baja la cama exalts the memory of those who perished with due consideration, and represents an important and individual contribution to the body of fictional works about 9/11. 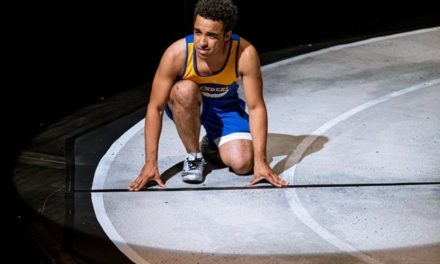