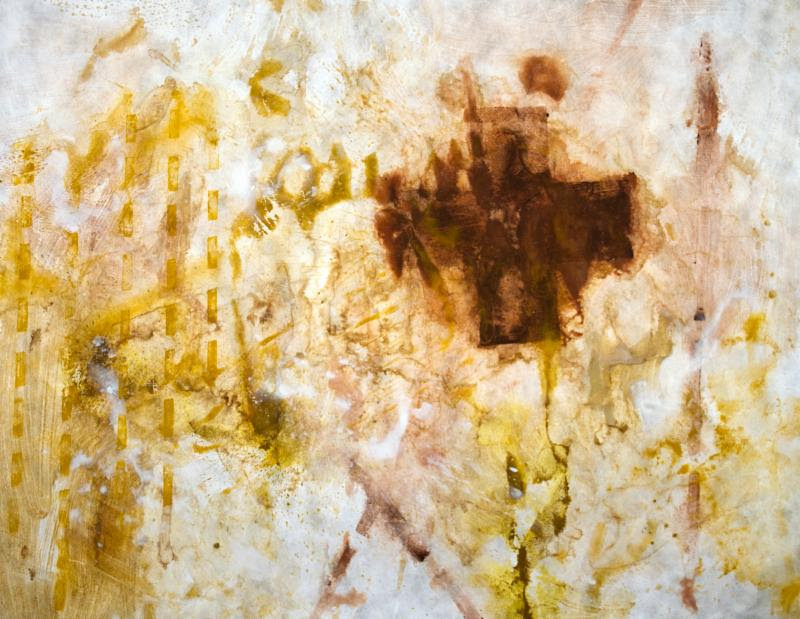 I remember when Brent Dedas’ paintings featured spare, almost totem-like images of tools, functional form rendered in realistic terms, but still entirely comfortable as object cast against a visually textured surface, representational adrift in a sea of abstraction. Such objects functioned as anchor for the exchange between viewer and artist in each piece.

His new series, The Architecture of Destruction, is born of the desire to be more purely abstract, yet forms still emerge, demanding to be recognized. Dedas’ process begins with a  ‘chalk line’ technique that utilizes other raw materials to establish a compositional foundation, and the approach of a ‘builder’ seems to be a very important aspect of the work. The formal foundation gives way, however, to a more organic and reactive relationship with the materials.

Dedas feels the schematic results in a, “…map like landscape of history and reaction,” but the map charts levels of meaning beyond the tactile pleasures of surface texture. Allusions to tools crop up in these maps: a level, a saw blade, the forms are more fundamental than the axes from the older work, yet they almost follow subconsciously from the underlying themes of construction evident in the artist’s process.

Thematic sophistication contrasts against the earthy and elemental presence of the work: strong ochre and sienna hues spread across the surface in gritty textures, and the paintings feel like rubbings made of ancient artifacts, created as a document of an archeological dig. In this specific presentation at Galerie Hertz, some of them are large sheets of paper attached to the wall only at the top, so that the air currents pull them gently away from the wall, an effect that introduces a subtle, ethereal tension against the constructionist mark making.

Tension is inherent in the artist’s intention here. Dedas cites destruction as an important element of his creative process, which seems, on the surface, at odds with the concepts of architectural construction, but he is influenced by the many visits to construction sites with his father, where one of the lessons was, “…in order to build, you must first destroy,” That simple notion captures a conflict that perhaps rests beneath all of human existence; each civilization burying its predecessor in turn. 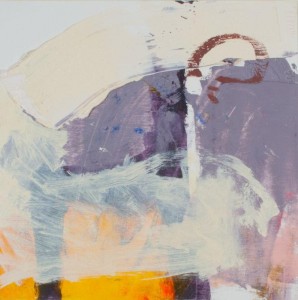 Evan Fugazzi’s work shares space with Dedas in this exhibit, and the two seem well paired for the similarities in concentration on surface and dynamic abstract composition, but there is also striking differences. Fugazzi shows us simple, declarative applications of color reminiscent of certain mid-century abstract painters. Bold strokes of subdued color show a calculated intention paired with a parallel allowance of drops and runs streaking the canvas that we are tempted to see as random.

In contrast to the layered constructions of his exhibit partner, Fugazzi creates compositions that are at times so simple as to give the appearance of having been accomplished in a matter of minutes, further reinforcing the spontaneity and visual purity that is often mistaken for a lack of meaning or technique in the layperson’s characterization of abstract art. 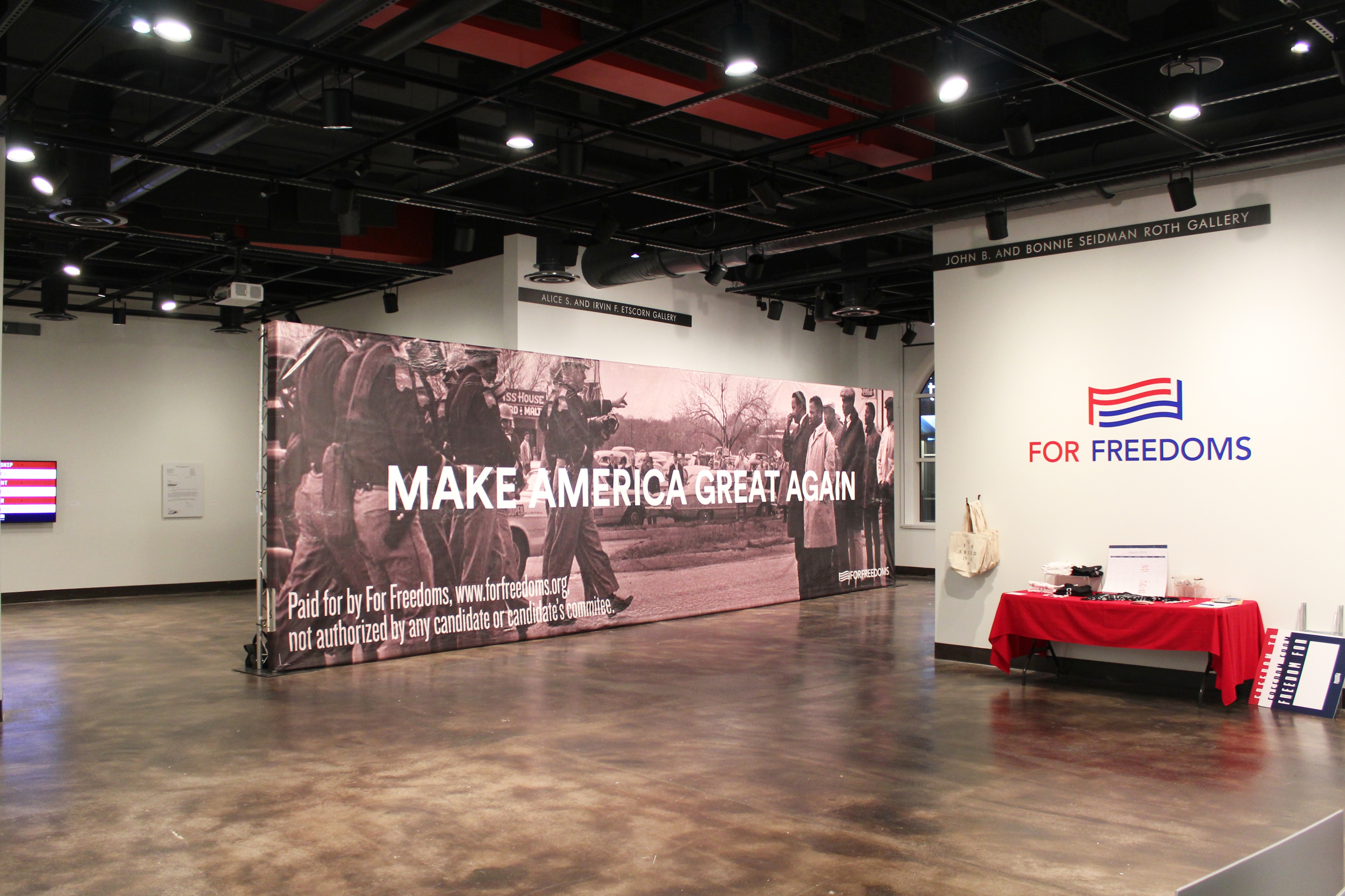 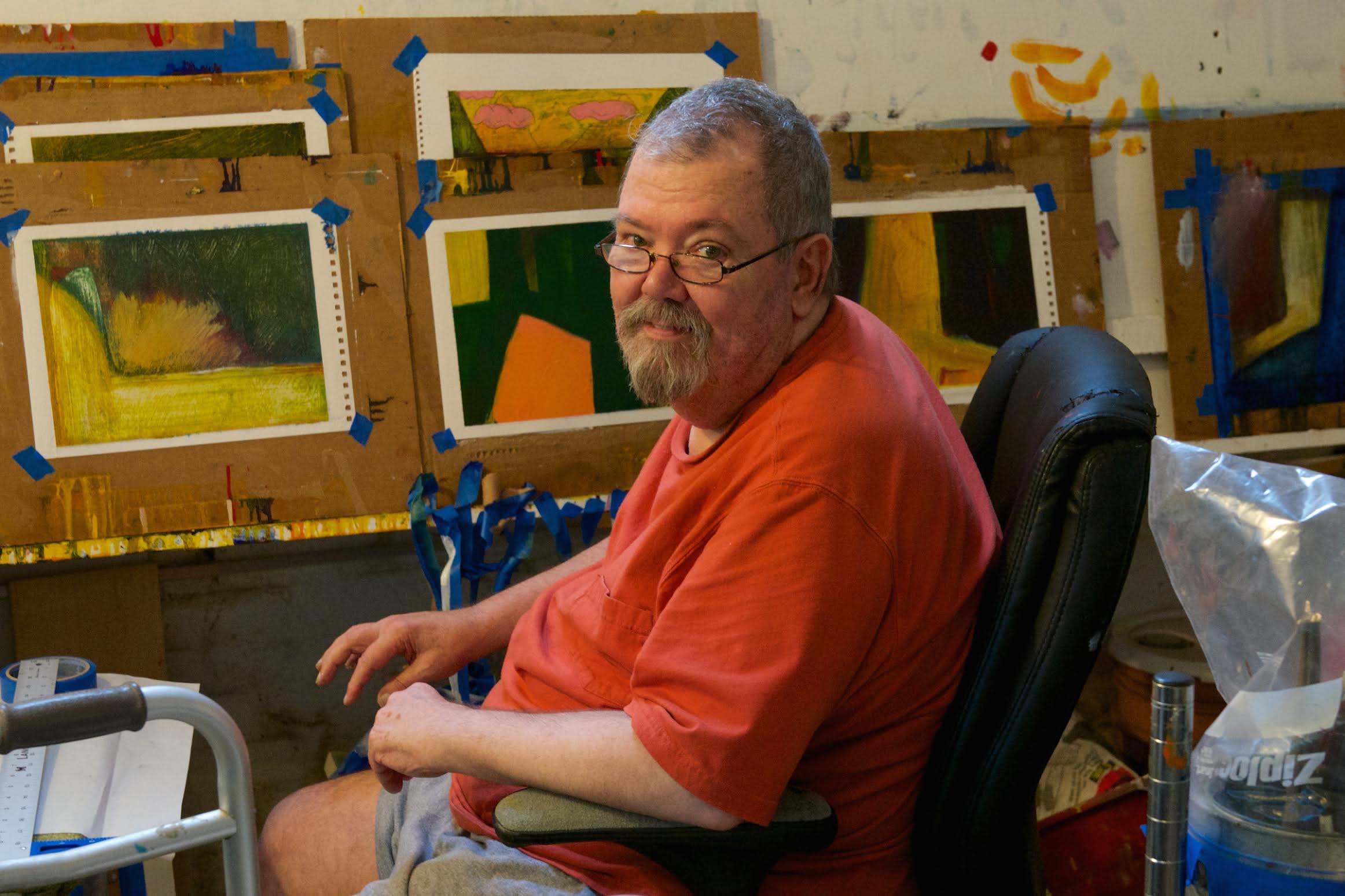