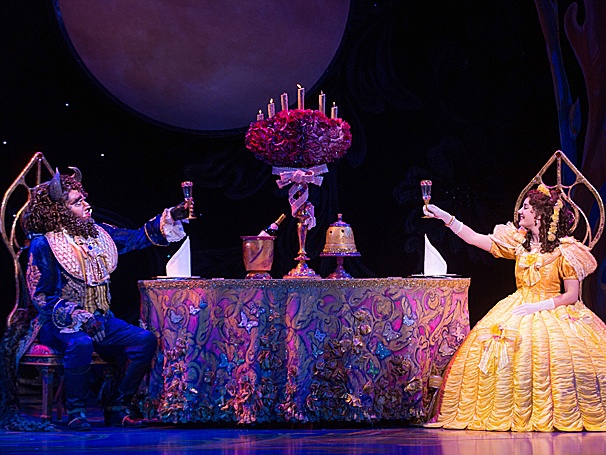 PNC Broadway in Louisville fills the Kentucky Center this week with the current tour of the 1993 Broadway hit Beauty and the Beast, the stage version of the 1991 Disney animated movie. The opening night audience included many family groups who clearly were fans of the movie.

This NETworks production is very busy and often feels cramped on the Whitney stage, leaving one to wonder if this venue is one of the smaller venues for this tour. The ornate baroque curlicues of the false proscenium and wings jostle visually with the equally ornate moving set pieces that create the Beast’s castle. The brightly painted village set pieces compete with the bold, often clashing, colors of costumes and backdrop. So much color, pattern, and movement in close proximity frequently muddle the storytelling of text, song, and dance.

The past twenty years have seen significant changes in how stage musicals are created; and many of the ‘effects’ of this production seem less dynamic than when it premiered. The use of puppets for the prologue and forest encounters is a wonderfully theatrical conceit but, even behind a scrim and supported by lighting and smoke, they are less than exciting. The Beast’s transformation is lengthy and – because everyone knows the ending – underwhelming, disappointing in a season that has also seen another beloved fairy-tale, Cinderella, handle transformation breathtakingly.

For aficionados of the movie, it is the specialty characters that hold the greatest appeal. In this production it is Christiaan Smith-Kotlarek’s Gaston that is most successful. His character is both larger than life and an uncomfortably recognizable bully, while his sidekick Lefou (the limber Dan DaSilva) relies mostly on physical schtick. Cogsworth (Samuel Shurtleff), Lumiere (Ryan N. Phillips), and Mrs. Potts (Stephanie Gray) are reliable allies in guiding the Beast and Beauty, generating appreciative laughs for familiar routines, but rarely mining both the pathos and oddity of their circumstances to lift the characters into the iconic. Belle’s father Maurice (Thomas Mothershead) on the other hand is both exuberantly eccentric and in, ‘No Matter What,’ a loving father.

The two most recognizable numbers of the show, ‘Be My Guest’ and ‘Beauty and the Beast’ brought the house down, with audience members scrambling for party streamers, from the former, that tumbled from the ceiling as ‘champagne bottles’ exploded at the climax of the song.

Sam Hartley’s Beast has a strong, full voice, which allows the audience to believe that Belle can fall in love with the character-within, and ‘If I Can’t Love Her’ is a fitting finale to act one. This version makes the Beast almost comic – when even the movie makes him grumpy enough to be scary – which detracts from the burgeoning friendship and love between Belle and him; and Beast’s costuming and makeup is unfortunately faux, when compared with other iterations. Brooke Quintana, who plays Belle, finds the wholesomeness in this role and avoids the potential sentimentality. Costuming too hinders this character, which seems a pale imitation of original designs.

Associate director Sam Scalamoni and associate choreographer Connor Gallagher have recreated the outline of this multi-Tony-nominated musical (winning for original costumes by Ann Hould-Ward) which ran for more than a decade on Broadway. This iteration has lost the luster and mystery of the original, leaving familiar songs and characters somewhat unmoored.

In recent years classic Broadway musicals like West Side Story, the thirtieth anniversary production of Les Miserables (seen in Louisville) and, most recently Fiddler on the Roof have received new treatments, reframing the stories with a contemporary sensibility while also honoring the spirit of the original production. With a new live-action Disney movie of Beauty and the Beast in the offing, it’s time for this stage musical also to be dusted off. 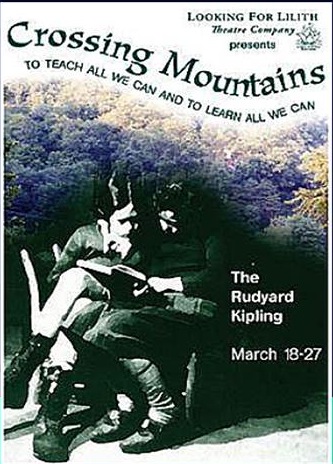