A.S. Waterman has placed her mysteries in a variety of settings, from Rhode Island, Savannah, Santa’s workshop, Old Louisville, and medieval Wales, and even an intergalactic spaceship. In The Mystery at Raven Hall she has made perhaps her most unusual choice in location: the afterlife.

Senator Elton Ethridge (Joe Monroe) was executed for killing his wife in 1952. But now his eternal soul is troubled by the uncertainty of whether or not he actually murdered her. The Senator suffered a blow to the head at the time of the killing that also caused him to forget the events of that evening.

Two otherworldly figures, Misty (Maggie Gardner), and The Listener (Ben Rogers), attempt to help the Senator find the truth of the circumstance by taking him back to 1952 and the day of the murder. If you work in Limbo, I suppose this is your job description.

The action that is replayed reveals to Senator Ethridge that, in the middle of a reelection campaign, his wife Lenore (Erica Goldsmith) was having an affair with one of his aides, Clay Barstow (Tom Staudenheimer). Other suspects may include Jeannette Ethridge (Brittany Johns), their daughter, and Hank Davis (Niles Welch), the Senator’s campaign manager, but one of the enticing ideas within Waterman’s scenario is that it is entirely possible that the Senator actually did the bloody deed.

You should never say more about a WhoDunnit plot without moving into spoiler territory, but Waterman seems to enjoy using the mid-20th century period to inject some modicum of social commentary. When Senator Ethridge mentions legal rights at one point, Davis quips, “Rights and a dime will get you an iced tea!” The line is funny but also indicative of a casual dismissal of American rights happening in the current election campaign. As this play was written in 2004, it may not have been intentional, but it still cannot help but resonate.

The ensemble in general does a fine job, although the period deep south setting encourages some scenery-chewing, but Joe Monroe overlays his plumy Alabama dialect with enough discipline that he finds some nice subtlety as well, and Erica Goldsmith exhibits an impressive degree of emotional shadings in one moment of near-hysteria that stands out among WhoDunnit shows. The costumes do well in evoking the time and place, and well-chosen songs fleshed out the piece, including two originals by local performers Two of Diamonds. 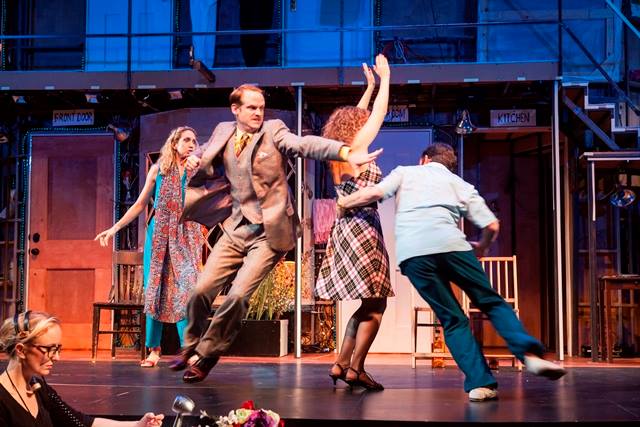