Bagged and Bored, Season One, Episodes 1-6

Bagged and Bored starts from a silly, silly, place, goes to many other silly places, some ridiculous, some thoughtful, but all, ultimately, sublimely silly.

A web series launched in February 2015, with six episodes available to watch on the Pixel Brains channel on YouTube and a seventh, Season Finale episode scheduled to premiere at a special public screening at Clifton Center on June 10.

The setting is a struggling comic book store called The Destination, which is populated by an eccentric posse of fanboy knuckleheads. Store Owner Kent Carney is a comically tortured soul still nursing a break-up with the mysterious Josie (Lauren Argo), The uptight, tweed jacket and bowtie wearing Assistant Manager Adam Shanks (Sean Kellar), and the capable and easily taken for granted Zooey Summers (April Singer) are the remaining staff, although the first episode, “All Staffed Up”, centers around the conflict provoked by Kent’s hiring of the glamorous but dumb-as-rocks Veronica (Taylor Carden). The hire, motivated by lust, especially annoys Jake (Jake Reber), an epically arrogant comic geek who spends as much, if not more time at the store than the staff.

That’s the core group, but every episode features guest stars, most notably Johnny Masters (Jeremy Sapp), the owner of The Comic Dojo and Kent’s nemesis, or Slammin’ Sid (Sean Smith) the mysterious Pog master from Adam’s surprisingly dramatic past.

The first episode is engaging enough, with sharp, funny performances, stylish comic-book graphics, and a breezy tone that emphasizes the we-won’t-overstay-our welcome attitude of the whole thing; a determination not to be taken too seriously that suggests Bagged and Bored is just one more web series produced by a well-meaning group with no meaningful ambition.

Yet the promise of something better is evident, and Gaither wastes no time making good on that promise. Episode 2 uses “New Comic Day” to highlight the sad state of The (fictional) Destination’s business and the quirky nature of its meager customer base, and Kent, Zooey, and Adam are all given intriguing backstories that set-up a second season. (In real-life, The Destination is very successful, and owner Brian Barrow is listed as an Executive Producer for his generous support of the series).

But it is also smart about the details of the coded world of comic geeks, and uses the talents of its cast, a fruitful mix of trained actors and experienced improv performers, to good effect. They are perfectly cast and quickly establish their characters as defining pillars of the narrative.

By the time we meet Sid, in the fourth episode, Gaither’s storytelling has started to rise to an unexpectedly sophisticated satirical perspective, building a detailed parody of pop culture obsession in a Fight Club framework. That the episode is taken over by Sean Kellar’s character displays confidence in both the ideas and the creative team on both sides of the camera, with a nifty animated flashback by Harry Hickle, an original song (”This is How We Slam”) by Rance Reinhardt and local rap artist Rick Ali, and location work for most of the story. It reveals the larger ambitions for the project, which are even more fully realized in episode six, “Kuso Kombat”, which  faces Kent off against Johnny Masters in a fantasy card game called Kuso. Kent is hopelessly outmatched, and the stakes are high, but an extended training sequence in which Zooey delivers a concentrated dose of Kuso insight, is one of the creative high points of the series, adroitly contrasting the hyperbolic action sequences (Aaron Patterson delivers the cool special effects) of the player’s imagination with gonzo humor and a sprinkling of understated irony.

Of course, there may be legions of people for whom all of Bagged and Bored is just too ‘insider’ to be of interest. Yet American culture is dominated by cult-like obsessions, and it would seem that the series is smart and funny enough to appeal to a wider audience who can identify with these developing characters even if you don’t know manga from Mobeius. The performances go a long way toward establishing this identification, particularly Ms. Singer’s Zooey, who is given (so far) more backstory than the others, and an important bit of pathos at the end of “Kuso Kombat” that could lead to more emotionally resonant plot complications. And Mr. Keller does more subtle things with Adam Shanks than you would perhaps expect. 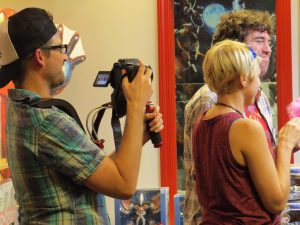 Creator Matt Gaither wrote outlines of the first season episodes before he began filming, but the principal photography happened over several months. This may, in part, account for the impressive increase in quality within six short episodes. It also builds expectations for a follow-up season. If season one leaves us wanting more, season two suggests an even greater leap forward. Gaither intends to build a budget through crowd-sourced funding so that he can increase production values and perhaps even pay the cast and crew, who have been thus far volunteering their time.

In the sneak peek for the finale it appears that the story will wrap up with a major cosplay theme and lost of extras. It will premiere at a special event, free to the public, at The Clifton Center. The evening will include special appearances by the cast, behind the scenes video featurettes, collectible t-shirts, and more!