Juergen K. Tossman & Rita Hight in I Bet On The Nag! Photo courtesy of Bunbury Theatre.

It’s Derby season, and that means lots of celebrations around the city, from Thunder Over Louisville to the big race itself. One event you may not have thought of, though, is this delightful little production over at the Bunbury Theater at the Henry Clay.

I Bet on the Nag! is another in a long line of plays written by stalwart Bunbury leader Juergen K. Tossmann; a charming little two-character piece that totally enthralled the audience on the night I attended.

Let’s get the negatives out of the way first. The play is a bit long, and there is some last minute political lecturing that, while relevant, feels a little shoe horned into the plot. The play could possibly have worked better as a one-act with a more streamlined narrative, but overall it worked and kept my attention.

And now the positive, which I’m glad to say is far more prevalent. The show tells a charming story of two lonely middle-aged people meeting in an otherwise empty box at the racetrack, and over the course of the two-hour play they both endear themselves to each other and get on each other’s nerves in equal measure. Watching a new friendship develop feels natural with two solid performances bringing them to life. Since Tossmann wrote it himself, it’s perhaps no surprise how easily we can accept him as the acerbic loner Wheadon Papajohn (and yes, there are abundant jokes about that last name). He’s a crusty but loveable loser at betting, but ultimately sympathetic once we get his full story. Rita Hight is every bit his match as not-as-vulnerable-as-she-seems Vida Prim, a recent divorcee and novice to the track, with a few secrets of her own to reveal. Watching these two strong talents spar goes a long way to compensate for the show’s runtime.

The set, as designed by Hannah Algeier, is utterly convincing in its simplicity, a wooden box lined with green wooden beams and filled with a set of box seats that reportedly are authentic relics from Churchill Downs, and it’s all nicely punctuated by Gerald Kean’s lighting and Bob Bush’s technical direction.

If you are really into the local horse race scene, the show will no doubt hold stronger meaning for you (I confess a few of the references went over my head) but as a character study of two souls searching for connection, it works surprisingly well. 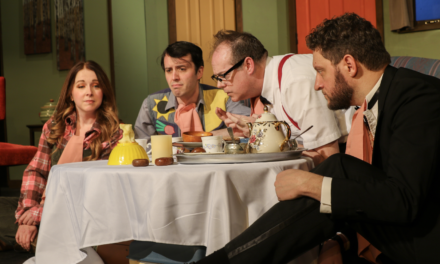 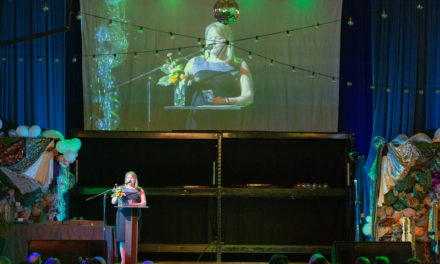