Have you ever attended a performance and wondered what it looked like once all of the scenery and backdrops were removed? How about how actors and singers act before they take the stage? In director Chas Rader-Sheiber’s vision of Richard Strauss’ Ariadne auf Naxos we get a peek into the theater’s real-life look and backstage action.

As the audience sits down at the Brown Theatre we notice that backdrops are missing and the stage is equipped with a dressing/makeup table, a Stage Manager’s podium, a set of raised steps, a door, a dressing divider, and a ballet barre. This is what it can look like backstage and on the stage before the curtain rises.

As the Louisville Orchestra tunes their instruments two people walk on stage, each carrying musical scores and they sit on the steps and hold a discussion over the scores. Why it is Maestro Joey Mechavich and Ariadne’s Composer (Elizabeth Batton); more last-minute backstage goings-on, in full view of the audience.

As the Maestro leaves the stage and takes his baton in hand to lead the musicians, actors and singers mill about on stage as well as stage management (Bongani Ndhlalne) and Costumers/Wig Makers (Zackery Morris). Everyone is in a flurry preparing for the performance while production is busy readying the lights and sets and settling the demands of the talent, demands that could often be silly.

The Composer is eager for the evening to commence, as he is about to premiere his Ariadne at the house of the wealthiest man in the city. Upon learning from the Major Domo (Gregory Maupin) that the opera will be followed by a burlesque show, the Music Master (Daniel Mobbs) does his best to console an already frazzled Composer.

The two companies are not getting along too well so, of course, because of a fireworks display that is scheduled for the evening, the two troupes will have to perform together side by side. The Composer would rather destroy his opera script than have a comedy group in the mix. At the coaxing of the Music Master, The Composer gets to work on adjusting the score all while the Prima Donna (Christine Brewer) and the Tenor (Garrett Sorenson) suggest that most of the changes be made to the commedia dell’arte troupe’s roles, not theirs.

Zerbinetta (Elizabeth Sutphen), the troupe’s siren and star, not afraid to tell it like it is, informs The Composer that his Ariadne is too lofty, that she needs to be more relatable. This suggestion renews The Composer’s vigor as he sees a softer side of Zerbinetta. But just as quickly as he gets to work on the changes, The Composer is angered once again by the antics of the troupe and the score is essentially up in the air as Ariadne’s story begins.

On the rocks of a deserted island sits lovelorn Ariadne (Christine Brewer) abandoned to be alone, save the nymphs that tell her sad story, by her lover Theseus. While Ariadne is in a brief awakened state, Zerbinetta and her fellow troupe member Harlekin (Conor McDonald) do their best to buoy Ariadne’s spirits with little success. The other comedians give it their best, but come up empty as well.

As Zerbinetta sees the pain in Ariadne’s plight, she sends the troupe away and assures Ariadne that she is strong and is better than men. As Ariadne is not sure of her inner strength, the troupe begins to profess their love for Zerbinetta with Harlekin winning the fair maid’s heart. In Zerbinetta’s happiness, the comedians are convinced that Ariadne cannot be happy.

Soon a boat is seen on the horizon with the young god Bacchus (Garrett Sorenson) at its helm. The nymphs alert Ariadne of the boat and its captain and they convince her to meet him. Upon first glance, Ariadne is convinced that Bacchus is the god of Death and is fearful of him. Bacchus is taken with Ariadne and assures her that he is not the god of Death, has fallen for her, and will place her in the Heavens with all of the other gods.

In a passionate embrace, Bacchus and Ariadne sing of their love for one another as Zerbinetta and The Composer succumb to the idea that when a new love arrives, embrace and accept it.

I smiled throughout this performance. I delighted in every interjection of inside theatre moments: the bare bones of the stage, Alison Anderson’s colorful and hip costumes, and the clever lighting design of Christopher Ostrom and Frank Viskup made one feel like they were in a person’s house for a stage production. While I wasn’t too crazy about Zerbinetta’s wig choice in Act II, I felt that everyone else’s stylings were quite nice. Alice Baldwin’s set props were very well thought out in every detail, even down to a Happy Meal box.

I enjoyed Chas Rader-Shieber’s interpretation of Ariadne auf Naxos because I felt that he was thorough in his placement of where the comedic bits should be and where to let the music steal the scene. I would like to say that while I liked the use of the stairs with a sheet cover to serve as the deserted island, I think the placement of a palm tree or a Styrofoam rock would have added something to the visual effect.

Let’s talk about the music, shall we?

The trio of Joanna Latini, and previous Young Artists Clara Nieman and Natasha Foley, as the nymphs, were dynamic and added texture to the storyline. The troupe’s Dance Master Rodell Rosel, while not having a lot of time on stage, made his presence memorable. He reminded me of a character from the television show Ugly Betty, but his voice was smooth and inviting. Louisville native Daniel Mobbs was resonant and full as the Music Master, another role that doesn’t get as much time as it should.

Former Young Artist Ryan Connelly returns to our fair stage along with newcomers Isaac Frishman and Evan Boyer to round out the commedia dell’arte troupe. With tight harmonies and high energy, these gentlemen were the complete package.

It is a pleasure having Conor McDonald return as Harlekin. His aria Lieben, Hassen, Hoffen, Zagen was light and full of mischief. Although Louisville staple Gregory Maupin does not sing, his turn as Major Domo was done with just the right pinch of sass and snobbery.

I was quite happy when I saw the cast list for this performance as it features some of the Louisville area’s finest performers. I’ve already mentioned a couple, but two of the principles just happen to be a married couple. Garrett Sorenson, who played the Tenor and Bacchus, has had the great fortune of performing at the Metropolitan Opera and continues to leave audiences wanting more, and his turn on stage in Ariadne was no exception. With a strong, confident, velvety tenor voice he embodied his two roles. And who should be Garrett’s wife, but The Composer, the lovely Elizabeth Batton, in a difficult pants role. While Ms. Batton has a brilliant higher range, the strength of the orchestra made it difficult to hear her middle range sometimes. But even so, her Composer was entertaining and enlivening. I really enjoyed Sein wir wieder gut.

Make no mistake, Strauss did not make this an easy opera for musicians and even experienced veterans could get lost. With unusual stops, pulses, and key changes suffice it to say that I heard very little wrong in technique and delivery.

While new to Kentucky Opera’s stage, Elizabeth Sutphen felt very at home in her role as Zerbinetta. Besides having a stunning upper range and handling one of the toughest arias in the soprano repertoire, she conducted herself as a good actress as well, portraying the sought after chanteuse of the troupe. I am anxious to see her career grow.

Christine Brewer. I don’t fangirl on too many people as I have had the great fortune to perform and work with some of the greats of the opera and theater world, but Ms. Brewer is an exception to that rule. The moment she steps upon the stage as Prima Donna I wanted to give her all the deference that title holds as she Is Prima Donna. When she begins to sing about Ariadne’s sorrow in Ein schones war, hiess Theseus I was enthralled by her tone, her poise, her strength. Just when I didn’t think it could get better, it did. By the time Ms. Brewer’s Ariadne sang Es gibt ein Reich I began to have tears coming down my face. Anyone who says that a voice and music cannot be transformative has not had the opportunity to experience this songbird.

In my opinion, if this production of Ariadne auf Naxos is a prelude to what the Kentucky Opera has to offer in the 2017-2018 season, then I am putting a napkin over my lap and am ready to feast! 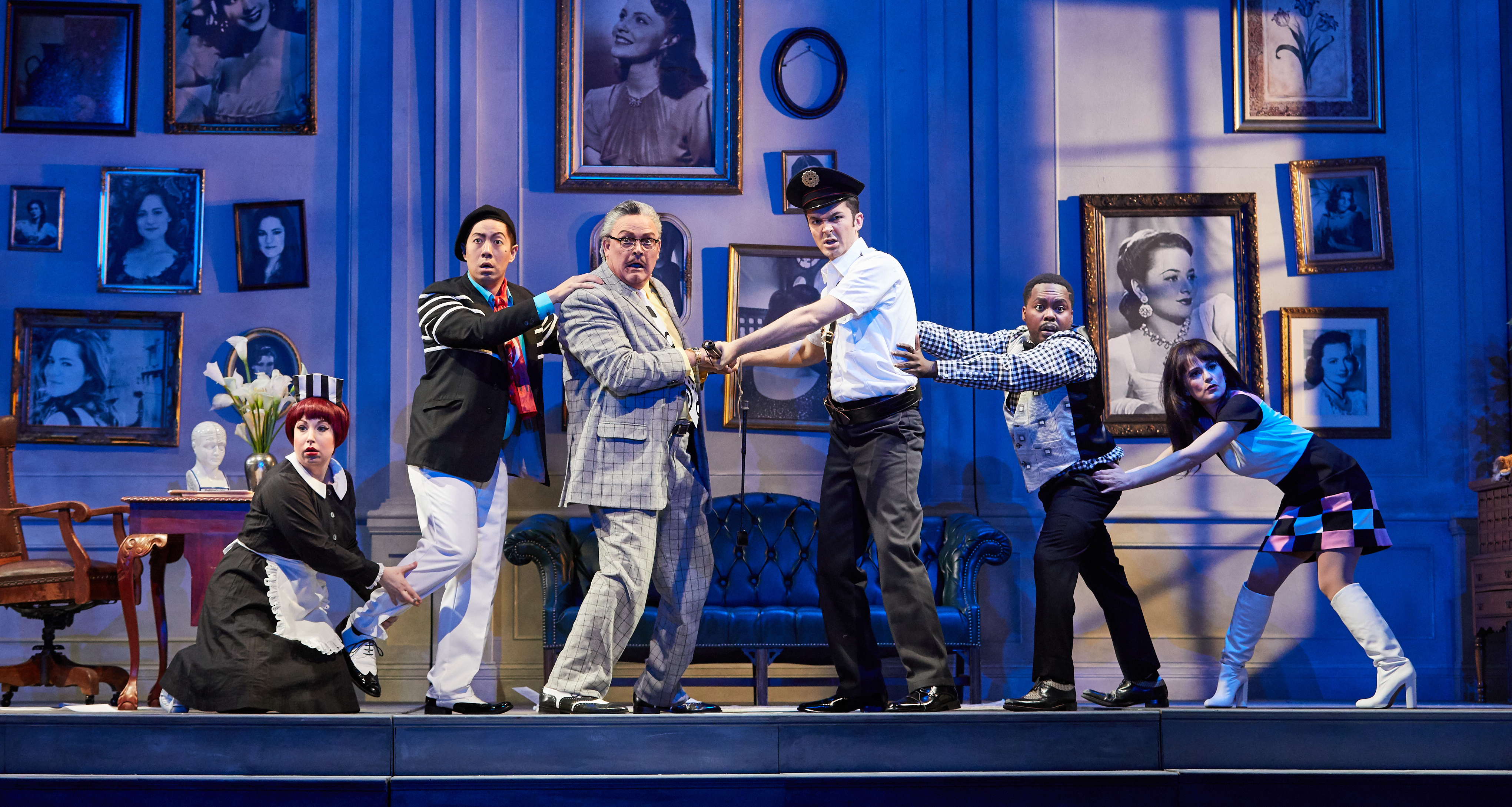