Keith Waits: You are playing two characters in Clybourne Park, which takes place in two acts that are fifty years apart, Betsy in 1959 and Lindsay in 2009. What are the differences in these two characters?

Katherine Martin: Well, the most obvious differences between these two women are that Betsy is completely deaf…ironically though it is Lindsay who is incapable of hearing people or reading a room. There are some overlaps as well; both women are pregnant, both on the edge of their lives changing forever…the excitement of a growing family and for Lindsey the urgency for stability. It is also interesting to discover what these two relationships, with their respective husbands, feels like 50 years apart.

KW: Didn’t you have to learn American Sign Language (ASL) to play Betsy?

KM: I learned the ASL that corresponds with Betsy’s dialogue. The director, Tony Prince, asked Carl Enoch, from the University of Louisville, to come in and teach ASL to everyone. Although it’s only really indicated once in the script for Betsy to sign to her husband, Carl and I found it appropriate for her to use sign every time she talked. I also did a lot of research on the deaf community and picked my mother-in law’s brain. She is a Speech Language Pathologist, who knows ASL and has worked with deaf students for over 30 years. 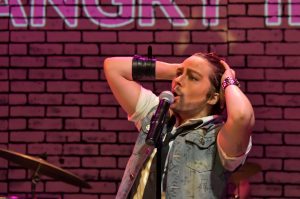 As Yitzhak in Hedwig and the Angry Inch. Photo by Michael Taggart Photography.

KW: In the last year you have played Yitzhak in Hedwig and the Angry Inch, Scarlet in Coyote Ugly, and now this double role of Betsy and Lindsay in Clybourne Park, which won the Pulitzer and the Tony. Is it just the luck of the draw, or is the goal you have been working f0r?

KM: Well, since moving to Louisville from New York four years ago, I have never stopped auditioning and have definitely been lucky to work with most of the best professional and semi-professional theatre companies in town. I’ve been living the actor’s dream with every role building upon the last and also positioning itself in complete contrast with the role that came before. I started this year playing Mandy in Time Stands Still by Donald Margulies, a guileless, young, woman then took on Yitzhak in Hedwig and the Angry Inch. And now playing Betsy and Lindsey, two mature women in the real world after playing Scarlet, a feral desert adolescent witch…it’s a blast! To answer your question, these are the sorts of roles I am very passionate about pursuing. I’m completely mad for theater! The whole thing: the collaboration, the adventure, the risk. This is what I love to do. I make sacrifices for it. It’s my contribution. And this isn’t it, I hope to continue to work and evolve.

KW: When did you decide to become an actor?

KM: Oh, boy. Sometimes I feel like its a decision I make every day! I first wanted to be a rock star! But I guess I knew around seven when I realized that I could do what the people I was obsessively studying on TV did. It made sense to me. My family suffered a great loss when I was young and I became the little clown making people laugh. Here’s a story…when I was nine my family and I were at a County Fair in Massachusetts, where I grew up, and I was getting my palm read for some reason. The psychic told me I was going to have five kids and stay in one place. Oh, my little heart broke and as I cried, my amazing New England mother yelled at the psychic that I was going to be an actress and travel the world and she was a fraud for not seeing that! She called her out!. Thanks, mom. 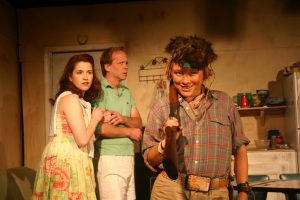 KW: What has been your favorite role so far?

KM: I love them all, for the experience and their lessons. Playing a character like Scarlett fulfilled a deep hunger for me, she’s extreme. I thank Barrett Copper for seeing I could do her justice. I understand her and it was a wild experience. The whole rehearsal and performance process was exhilarating. She is dangerous, but I felt very close to her, very protective. She awakened my imagination and by sharing the religious belief in herself and what she was capable of, I was able to transcend my own doubts. And now I know I can bite a raw fish head off! And playing Yitzhak was one of the most challenging and rewarding experiences of this busy year. First of all, he’s a man and former drag queen from Croatia. I am not. In finding our similarities in our differences, I could find myself inside him. All of our shared desires and fears. And I got to be a rock star…finally! It was terrifying! I can’t thank Michael Drury enough, getting to live through that fear every night….gave me balls.

KW: What role are you longing to do?

KM: I would like to do more comedies, farce, and slapstick but I don’t have a lot of specific roles at the moment. I just want to do it all, keep working, and continue to be challenged. To be part of projects that tell diverse stories, promote the female perspective, and push the art form forward.

KW: Your partner is an actor and director. Are the two of you competitive?

KM: We are each other’s biggest fans. We are very encouraging and supportive of each other. We have a 4-year-old daughter and we work really hard to make it possible for each other to continue to pursue our goals. It is a good thing we’re not competing for the same roles, cause he would never get any work! 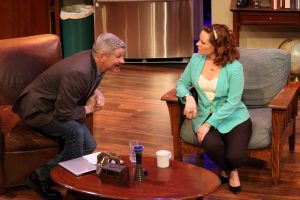 KW: What other places have you worked?

KM: Well, here I’ve had the pleasure of working with The Louisville Improvisers for their short play festival, The Bard’s Town Theatre, Liminal Playhouse, Theatre [502], Pandora Productions, StageOne Family and Kentucky Shakespeare. There are so many great companies I hope to collaborate with!

KW: What, if anything, is different about working in Louisville?

KM: I lived in LA for seven years in a perpetual state of auditioning; just doing student films and sub-par theatre. I went to a Drama Conservatory and studied at The Groundlings. But mostly I painted and wrote poetry. Then, I was in New York for two years, I became a member of the American Mime Theatre and that changed everything for me, it was an elaborately creative but also a disciplined home for me. I ended up producing two shows and directing one with like-minded friends just to be able to do the shows we wanted!

Basically, it’s safe to say I didn’t book anything good for nine years living in those cities! And that’s the thing with Louisville; it provides actors/directors/writers more opportunity to work. And I don’t just mean making money, but to actually work on being a better theatre artist. People show up to the theatre in Louisville. In New York you have to beg/bribe people to come see your stuff. It’s quantity over quality there. The people doing theatre in Louisville do it because they love it – they can’t live without it. Instead of fighting every day for an opportunity, here you can get that opportunity and fight to make it the best it can be. You can really work on elevating what you’re capable of. And now it’s expanding, with all the great film opportunity available here. I just booked a role in a feature film starring Jesse Eisenberg. I got a big ol’ crush on Louisville and am grateful to be here.

KW: What is the best direction you ever received?

KM: I’ve definitely kept with me what I learned from American Mime. If we were doing “across the floors”, which is where you are ‘character’ walking towards the teacher with an objective…of course, using only your physicality. And if you were not truthful, the teacher would say, “I don’t believe you, off the floor!” and you would have to go sit down. I carry that with me. If I’m not being honest and present how can I expect anyone to believe me? Body, mind, spirit have to be connected and I better be totally convinced by my choices, otherwise what’s the point? But here in Louisville? Barrett Copper just offered so many specific insights into the worlds of Scarlet for me. He is a visionary. He sinks his heart and soul into his direction. His rehearsal process was amazing: everyone felt free to explore, make mistakes and seriously commit. And he’s so responsive; everyone just wanted to make him laugh. His support and passion are infectious.

This is also the case for Michael Drury; he never sacrifices the story or relationships. You can feel his productions pump with blood.

KW: What music have you been listening to?

KW: What book is on your bedside table?

KM: I always have about three books going at once. I’m finally reading “The Handmaids Tale”! So taking a break from “Jitterbug Perfume” by Tom Robbins, and I always have some Stella Adler around.