There’s a lot to like about one of the newest theatre companies in town, Imagine Blind Players. They are a high-energy troupe of performers with varying performance experience, with the majority of them living with some visual impairment or blindness – hence the name of the group.

This month’s California Suite is their second main stage production. They perform in the basic but functional Lettersong Studio in Butchertown, merely suggesting that there are two rooms of a hotel suite, wisely not pretending that the Studio is a legitimate theatre space.

Darren Harbour helms both the company and this production. Harbour has been seen on stages around Louisville (the University of Louisville, The Alley Theater, and Resonant Light Theatre to name a few) and was also active with the American Printing House for the Blind’s Braille Readers Theater. He and several of the performers have been part of APH’s annual staged readings for several years, before branching out to form the area’s first company for blind and visually impaired performers.

Harbour and his Visual Director Jasmine Ross create a functional space for the four groups of visitors who come to this California hotel suite. Stage right there is a bed to represent the bedroom, and stage left a sofa with a table for props upstage to suggest the living room. Between the two rooms is a theatrical half-door that the performers navigate with varying degrees of success to delineate the two rooms. This convention could well have been done away with no other suggestion of a wall between the spaces, and one of the entrances was an already-existing curtain in the Studio. That is, this suggestion of realism detracts from the minimalism of other design choices.

For audiences who may be unfamiliar with conventions of audio-description (for audiences who are blind or visually impaired) Imagine Blind Players introduces some of those conventions into their production. At the top of the show, there is a verbal description of the setting. For each vignette, there is a description of each character as they enter, including physical type and clothing. When a detailed action happens that is not explicated in the text, that action is described. At times these interjections took me out of the play, as they were the only amplified spoken words; experimenting with sound levels or not amplifying this description would result in a better integration of this necessary convention.

Simon’s script is fast-paced with his signature jokes still landing effectively forty years after its publication. However, in the current climate of sexual harassment claims, much of his sexual innuendo seems dated and downright awkward in the first two play-lets. The final two vignettes offer more scope both in terms of storyline and character development.

In Visitors from New York, B.T. Kimbrough and Terrie Terlou are a divorced couple bickering over their daughter. This is the least dynamic of the scripts, and both Kimbrough and Terlou exhibited some hesitancy as well as occasional line lapses. The Visitors from Philadelphia move into more farcical territory with Harbour and Terrilynn Fleming playing a couple; she arrives at the hotel as he wakes to discover that he spent the night with a prostitute (Barbara Henning) who is still comatose in his bed. Harbour is physically facile, moving the body, clothing, and props with an assurance that has frequently had audiences asking, ‘can he see?’

It’s when we get to the Visitors from London that both the script and the performances get into full swing. Henning and Kimbrough are an actress and antique dealer couple in town for the Oscars. Simon knows this territory well, and the inside jokes are effervescent. At the same time, he allows this couple to have some real moments of vulnerability as the emotions and alcohol of the evening take their toll. Henning and Kimbrough have some very true moments together as they reflect on their marriage in which both have had affairs, he with other men, and yet there is real affection between them.

The Visitors from Chicago double the hijinks in this suite, with two couples staying at the hotel for a tennis holiday. Thomas Saling and Sue Ellen Melo are one couple, with Harbour and Henning playing the second couple. Melo’s character has been injured on the court, and the competitive efforts devolve into bickering and conflict between all four, which the performers clearly enjoy! The business that is involved in this play-let is fast and physical and entered into with an aplomb that sighted actors don’t always achieve.

The acoustics in Lettersong Studio are not kind. The linoleum floor and ceiling tiles cause the sound to bounce around the space. And at the times of high emotion that occur in each of the pieces, especially the final one – the voices become cacophonous and it is very difficult to hear and to understand the dialogue. It’s to be hoped that Imagine Blind Players will be able to find a space in the future that allows these performers’ voices to be heard and enjoyed by their audiences.

Each vignette is preceded by a sung introduction; I infer that these are pre-existing songs from different periods, selected for the parallels between the lyrics and the upcoming story. The various groupings of performers deliver sweet sounds and harmonies and add a unique spin to the Simon script.

Imagine Blind Players is a welcome addition to the theatre community, providing a valuable niche performance experience for performers who are blind and visually impaired, and a universal experience for all audiences. 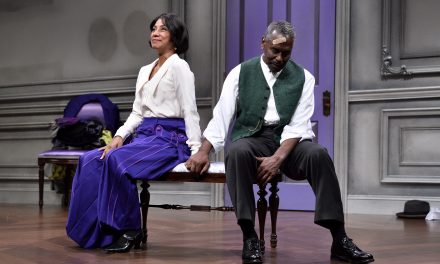