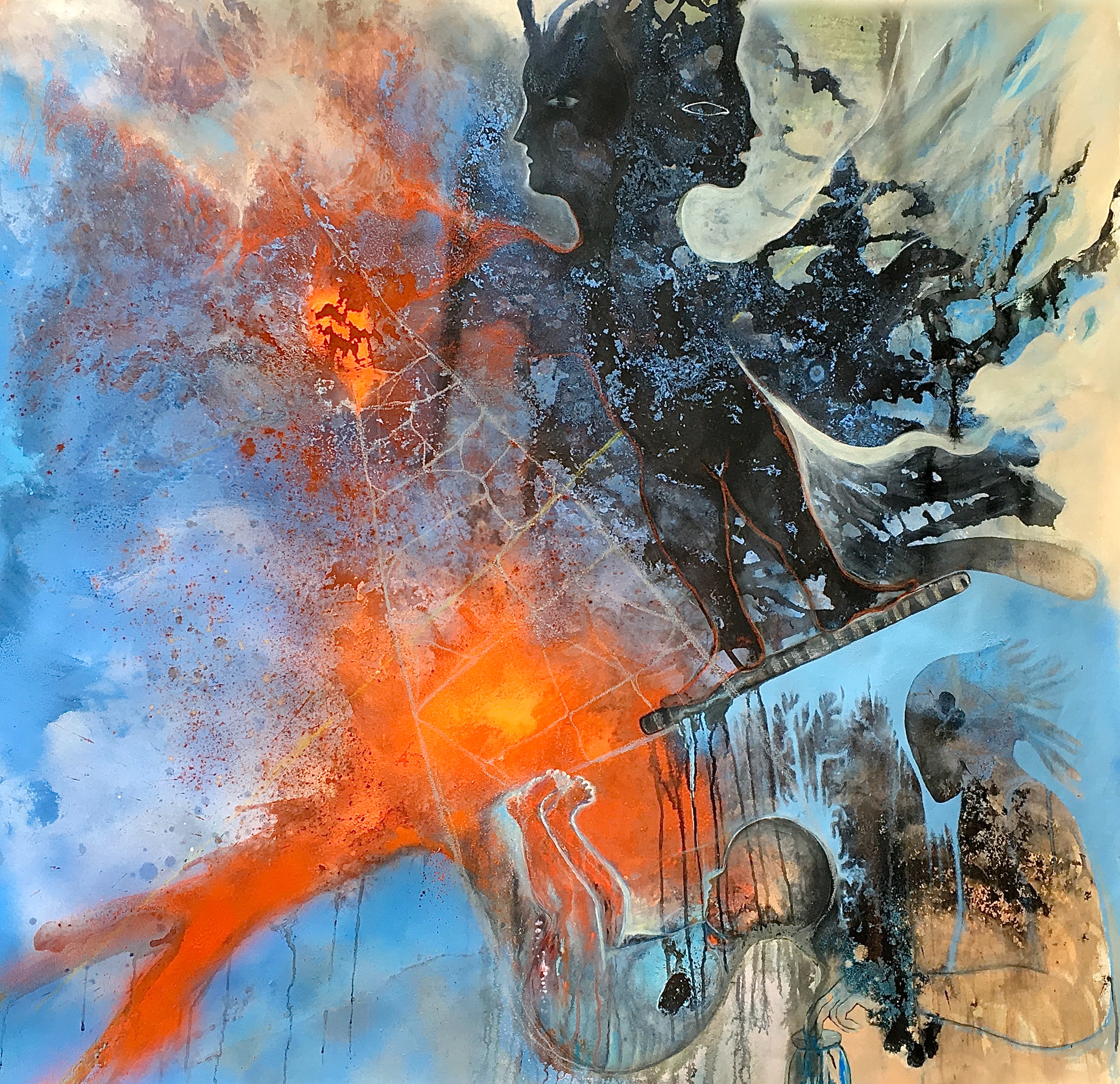 As part of an ongoing experiment in programming, like last year’s Sacred and Profane, Maestro Abrams has put together a program built around diametric themes, War + Peace. While most of us think of novelist Leo Tolstoy’s epic masterpiece, this evening’s performance is a bit different.

While perusing the selections for the evening, I noticed that there was a heavy favor for pieces that were written during the World Wars. While that may seem a little uneven in some ways, I don’t believe so. As Mr. Abrams mentioned in his program notes, there are many times throughout musical history that creativity is fostered during wartime and the first half of the 20th century is no exception. But of course, the good Maestro has thrown in music from centuries ago and present day for good measure and balance.

The evening began with Abrams on the piano accompanying our guest chorus to Charles Ives’ They Are There! As much as I enjoy having the Maestro tickle the ivories, I feel that the whole of the chorus would have benefitted from more conducting as there were times where you could hear and even see tentativeness in the parts, leading to some not so elegant delivery.

In Ralph Vaughan Williams’ Dona Nobis Pacem; Movement II “Beat! Beat! Drums!” the orchestra and chorus handled this rhythmically difficult piece, set to a poem by Walt Whitman, with care and respect. The diction and delivery was energetic and audible.

Members of the Chamber Choir made their way down off of the risers and stood among the orchestra as they performed selections from Monteverdi’s madrigal Guerrieri e Amorosi (“Songs of War and Love”). With an accompaniment of first seat strings and continuo (harpsichord), the small group truly captured the text and feel of the composition, with clear intonation and elegant delivery, save for a little muddiness in the melisma.

Sergei Prokofiev’s Waltz from War and Peace offered a nice introduction to the centerpiece of the evening: the world-premiere of Sebastian Chang’s Between Heaven and Earth. Let’s save that for last, shall we?

Maurice Ravel’s La Valse can be a technical beast, but with Abrams providing a lovely dance on the step while conducting, the orchestra did well in keeping up and provided an uplifting end to the evening.

There are but a handful of songs that can make me stop what I am doing and listen intently upon hearing the first notes. Samuel Barber’s Adagio for Strings is counted among those few. While not specifically written with a war or peace theme in mind, there is no question that a peaceful resonance can consume you upon its hearing. When you look at the score it is a simple orchestration that is rather straightforward in its musical styling: beginning, middle arc, slow fade to the end. Despite its simplicity, it still moves and fills us with a sense of serenity and peace. Saturday evening’s performance was nothing short of stunning.

Arvo Pärt’s Summa for Choir was a nice change of pace. Despite the tenors starting to wane a little, the energy was revved back up to give this contemporary piece the deference due to its placement within the program.

Maestro Abrams hit the nail on the head when he shared his appreciation for the deep well of talent that can be found in and around Louisville when he spoke of Kent Hatteberg and his assemblage of choral voices. Mr. Hatteberg is a living legend around this area and I appreciate his immense talent and skill in bringing talent forward for all to hear.

Another of Louisville’s shining lights is Baritone Chad Sloan. Mr. Sloan’s vibrant and powerful voice has magnetism and charisma and I can only imagine how far it might take him. The pieces that he shared with us Saturday evening highlighted of his prowess and skill. Mr. Sloan’s performance of Arnold Schoenberg’s evocative and moving A Survivor from Warsaw Op. 46 had the audience in rapt and silent amazement. A difficult piece for the orchestra, chorus and the narrator, I can honestly say I had never heard it performed better. A large smile came across my face as Mr. Sloan removed the microphone from his line of singing as he entertained us with Gustav Mahler’s “Revelge” from Des Knaben Wunderhorn, as he utilized his years of training and natural talent as a professional opera singer. Beautifully interpreted.

It is not often that Louisville is privy to a World Premiere, but we were Saturday evening with the introduction of Sebastian Chang’s Between Heaven and Earth. Commissioned by the Louisville Orchestra, Mr. Chang delivered a grand work with a lot of promise – another musical star on the rise.

The piece, subdivided into three movements, was inspired by Iraqi-born local artist Vian Sora’s artwork. Please visit Ms. Sora’s website (www.viansora.com) and familiarize yourself with her story and her artwork. Six of her pieces were central to the formation of this new work. Both Mr. Abrams and Mr. Chang were inspired by Ms. Sora’s creations, which then prompted their unique collaboration.

Aside from the music, Mr. Chang also wrote the lyrics for the chorus. He wanted to make sure that he found words that were essential in interpreting Ms. Sora’s deeply personal artwork.

The first movement: “City Face”, with Ms. Sora’s artwork projected above the orchestra, sounds full of hope in the beginning but then gets frenzied leading directly into the second movement: “Apocalypse/Maze 1/Maze 2”. If the title gives anything away it is that the music becomes introspective and resolute after a burst of noise, symbolizing an apocalyptic feel.

The last movement, “Ancestral/Air-Walker”, is reflective and leaves the listener with contemplation and acceptance. To be honest, I wish I had another opportunity to listen to this new work, as I feel certain I was not able to appreciate the entire nuance in this first listen.

There is no doubt that inspiration was culled from the striking oil paintings of Ms. Sora and videographer Alex Welgraven’s ability to project the art work in an almost 3D projection reinforced the orchestral work.

While there were some very strong moments within Mr. Chang’s composition, I feel that his chorus was simply too large. I could hear maybe 5% of the lyrics being sung. Had they not been printed in the program I wouldn’t have had an inkling of what was being expressed?

I enjoyed this program very much and there were many times that I could feel the hairs stand up on the back of my neck because of the intense emotion and raw. Those on stage and those in the audience of Whitney Hall most certainly shared a performance of deep meaning and thought that will not soon be forgotten. 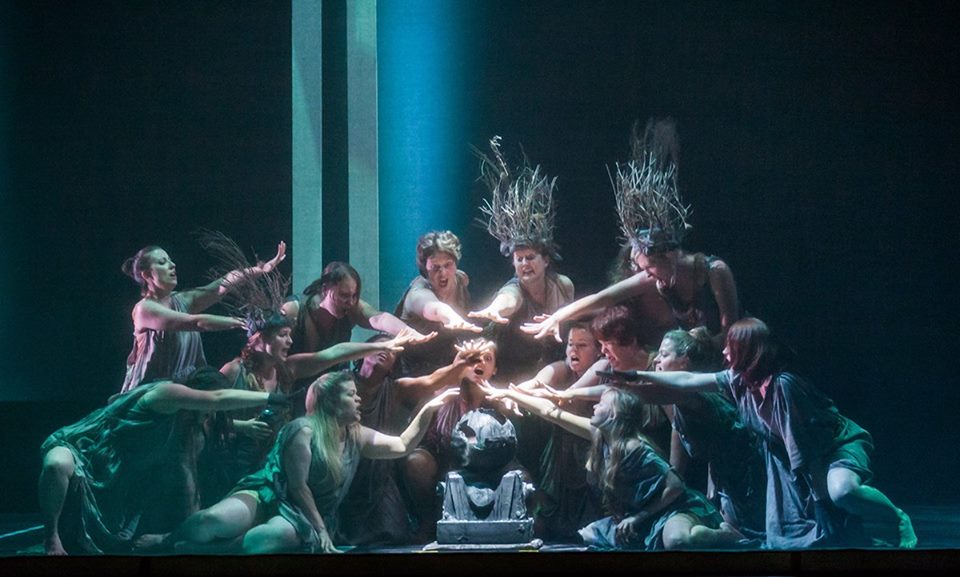