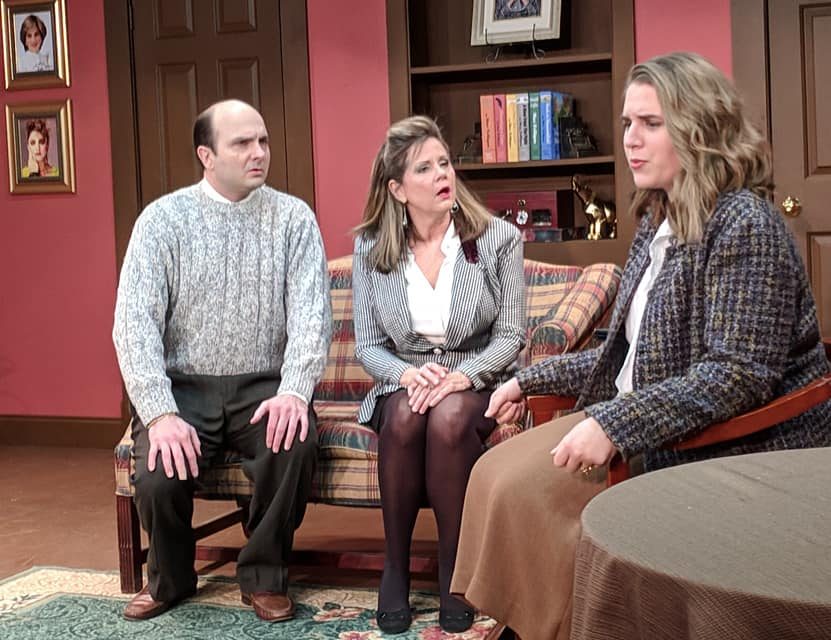 These cold, foggy, and dreary winter evenings are perfect nights for a touch of murder. Fortunately, The Little Colonel Players is serving one up. Typically thrillers are very difficult to pull off onstage. But thanks to a strong cast and solid direction by Sharon Spurrier A Touch of Murder is a valiant effort. Like all good mysteries, this production keeps you guessing until the very end. Don’t worry, you won’t find any spoilers here.

The play, written by Francis Durbridge, is set in England in the 1980s. In case you missed that fact in the program the framed photo of Margaret Thatcher sporting GIANT shoulder pads hanging front and center on the set should clue you in. The show opens with bestselling novelist Max Telligan’s (Gerry Rose) secretary Liz Ferber (Ginna Matson) clicking away on an electric typewriter, and if that doesn’t key you into the fact we’re in the 80’s nothing will. The script wastes no time bringing the intrigue when right away Ferber and Telligan’s estranged wife Harriet (Candy Thomas) receive news of a mysterious death. Right off the bat, Durbridge’s play lets the audience know that nothing is going to be quite what it seems.

As the hapless Max, the man at the center of the conspiracy Gerry Rose is perfectly cast. He infuses Max with a vulnerability that makes you truly sympathize with this man thrust into a dangerous situation with no idea why it is happening. Rose is the only actor who is basically in every scene and as the audience, you are with him all the way, he is the glue that holds the show together.

As Harriet, Candy Thomas gives a confident, engaging performance. She manages to make the character both earnest and suspicious at the same time. With a play like this, you never know quite who to trust and Thomas walks that line well.

The remaining rogues’ gallery is made up of characters who you just know are not whom they appear to be. Standouts include Gary Tipton, who brings appropriate suaveness to his role as a mysterious government operative, and Macreena Groody – who bears more than a passing resemblance to British actress Keira Knightly – gives the second act a shot of adrenaline as a tiger-striped coat wearing jilted girlfriend. Rounding out the cast are Sam Garas, who is handsomely charming as a wily American golf pro, Elizabeth Tomey as a shady lady with a multi-purpose cane, Chris Taylor as a mysterious American, and the above mentioned Ginna Matson as Telligan’s loyal assistant.

To be honest, when I realized I was in for an evening of British accents I got a little nervous, nothing kills a show faster than bad dialects. Yes, some of the actors struggled more than others with it but after two minutes I forgot they were even speaking in accents and I was absorbed by the story and performances.

Durbridge’s script goes on for about two scenes too many, but director Spurrier keeps the pace tight and the tension mounting. Spurrier also manages to pull off one or two jump scares, a true triumph for a theatre director, because they rarely work. All of the action in the play takes place in Telligan’s drawing room and Spurrier’s set, which she designed, serves the script perfectly.

If you love a good mystery thriller as I do, I strongly recommend you a go see A Touch of Danger. It is full of twists and turns that keep you on the edge of your seat. 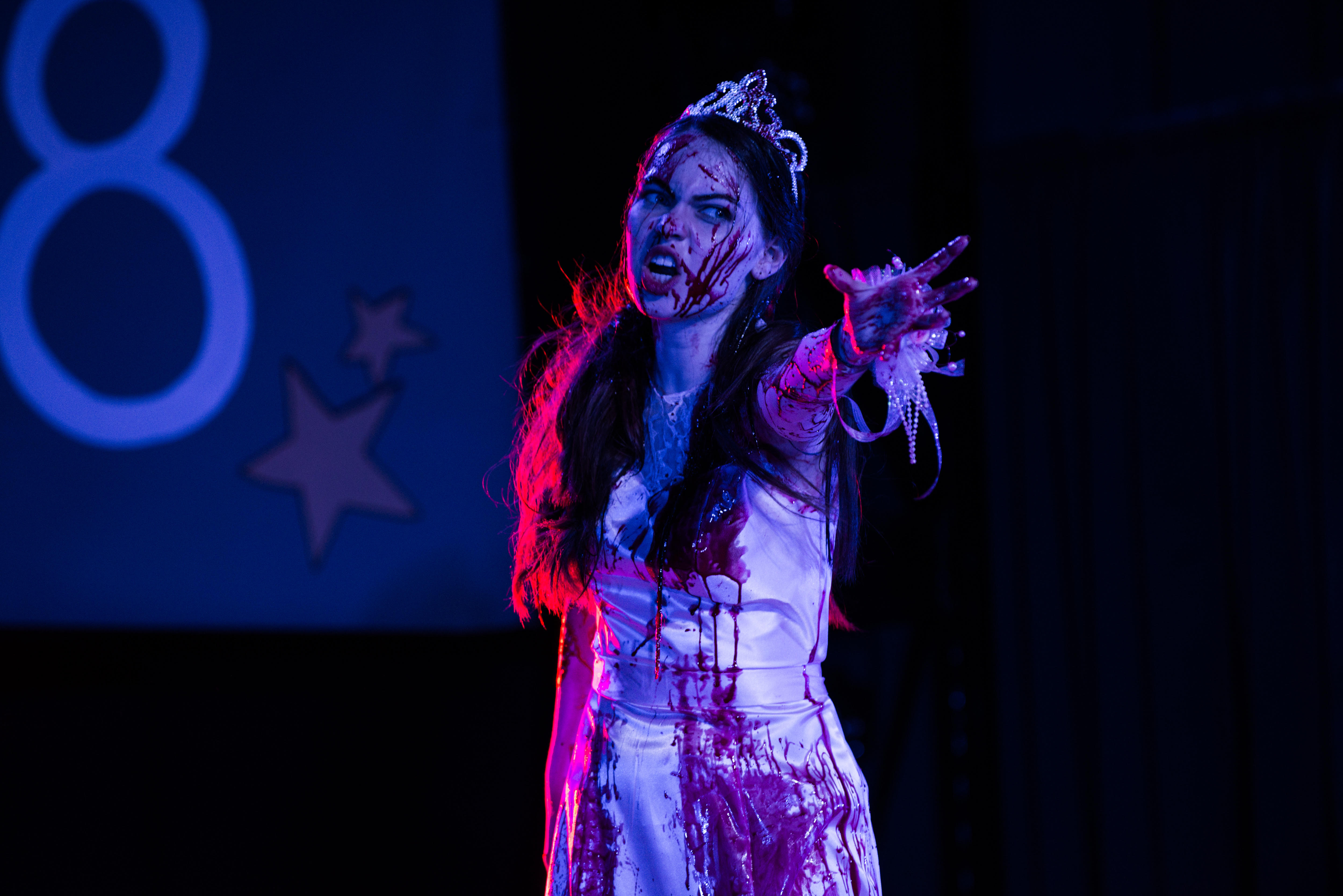 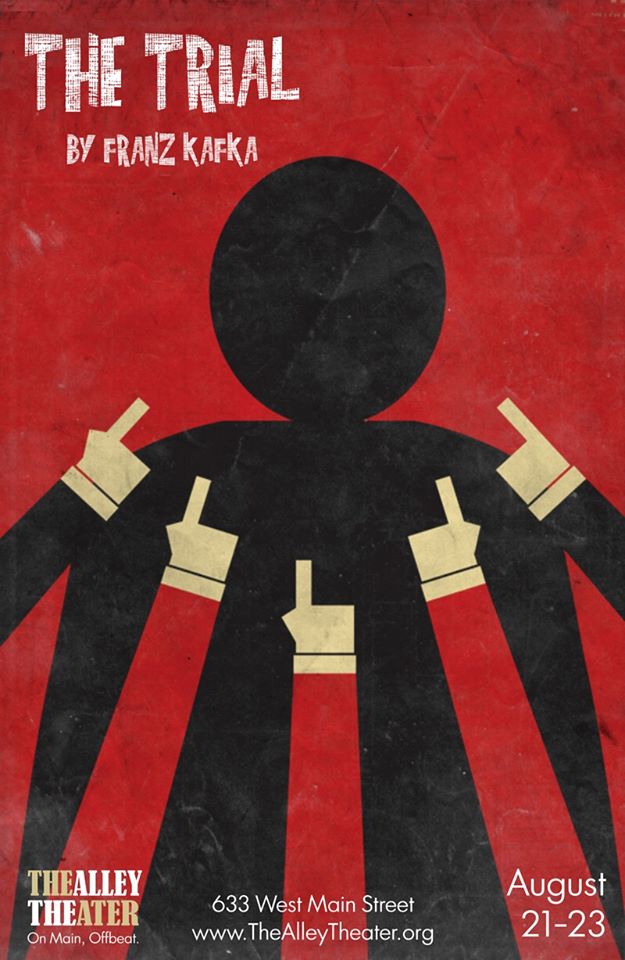