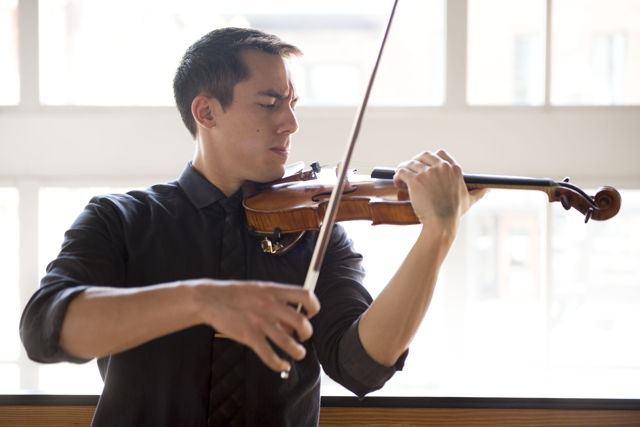 Part of the Music Without Borders Series

Tickle me delighted when our Louisville Orchestra announced another round in their Music Without Borders Series. In January we were treated to the theme of the 1812 Overture, in April we’ll immerse ourselves in William Tell, but this past weekend we were being taken to Italy in the 17th century through the 19th.

It is staggering how influential the culture of Italy has been over the course of recorded history: food, art, wine, and music. The centuries highlighted in this evening’s performance is just a small snippet of the talent and magnitude of influences that still permeate our everyday lives.

Let’s start our musical tour with one of the most recognizable overtures in opera: Rossini’s The Barber of Seville. One cannot help but owe a debt of gratitude to Chuck Jones for canonizing this piece into popular culture with Bugs Bunny in the 1950 cartoon The Rabbit of Seville. The movement begins with sharp tones and the need for clear delineation of note placement, as the stanzas are in constant motion. What fun it is to watch audience members bounce in their seats while gliding sixteenth notes fill their ears in quick succession. There is a musical notation that has to be paid attention to and that is the tempo can sometimes feel like a runaway train and it requires an attentive conductor to keep it on the rails. Happy to say that there was no derailment.

Next on our tour is the oft-heard “Winter” movement from Vivaldi’s Concerto No. 4 No. 2 in F Minor, more commonly referred to as “The Four Seasons”. Vivaldi was ahead of his time with this concerto as it is one of the earliest pieces of “programmatic music”. What that means is that this is a score that tells a story within its frame. Hence, Four Seasons. The beginning of the movement is a little jarring and I dare say inspired Bernard Herrman’s theme for “Psycho”, but as Mr. Lefkowitz takes his violin and begins his solo work we are transported to thoughts of icicles, chattering teeth, cold rain, and walking on a snow covered trail on a chilly winter night. This particular movement is divided into three sections and each section has a distinctive sound: the familiar melody that has been used in movies and DeBeers commercials, the plucking of strings and the last section reminiscent of a concertina.

Mr. Lefkowitz made a wonderful observation about our next composer, Niccolò Paganini: if only he would have created work for other instruments in the way he did for the violin. Known for his extraordinary compositions for that instrument, I can only imagine what his genius would have done on a broader scale. But, we at least have his work for strings to ooh and aah over. And that is done quite easily. Perhaps one of the most challenging works for solo violin was handled with dexterity and precision by our guest conductor and violinist, Maestro Lefkowitz in Paganini’s Violin Concerto No. 2 in B Minor, Op. 2, Mvt. 3 “La Campanella” or “The Little Bell”. While this is a charming title the high pitched doubling of the violin with tubular bells might send dogs into howling frenzies, it requires great musical knowledge and focus. This piece has been borrowed by other composers, most notably Franz Liszt for his Etùde in G# Major, also called “La Campanella”, which is considered one of the hardest pieces for piano. While this is indeed a difficult piece, there is simplicity to it in that as I listen I can’t help but think of a precocious young child, playing with abandon, joy and lots of giggles.

The four movements of Ottorino Respighi’s Ancient Airs and Dances, Suite No. 1, P. 109, are rooted in the folksy sounds of his modern-day Italy. In fact, the second movement is based upon a melody composed by Galileo’s father. This section is perhaps the most striking of the four as it features a very deep and substantive sound that utilizes the lower timbre instruments in a delicious way. The first movement certainly conjures feelings of pastoral fields of vineyards, the third movement features a lovely doubling of the harp and winds and the fourth’s bright and bouncy tempo featuring solos in clarinet, harpsichord, and cello, make one want to take up ballroom dancing. I do have to mention that cutoffs tended to be a little sloppy throughout this piece, though. A quick glance at the conductor seemed to fix it.

One of the greatest Italian composers of opera would have to be Giuseppe Verdi. This evening’s selection was the Prelude to Act 1 of La Traviata. As part of what musicologists call Verdi’s Middle Years, which also includes the operas Il Trovatore and Rigoletto, La Traviata is what I would consider another of the stepping stones to his achieving greatness as a composer. Right off the bat, we are introduced to tones that elicit a somber and emotional feeling which then thematically change into sounds of hope and happiness, before returning again to the primary. Verdi’s ability to interweave hints of a thematic structure is mesmerizing. And having an orchestra that realizes and reacts to those themes is refreshing.

Closing out the evening we heard a piece by a composer that many consider a “one hit wonder” (including Mr. Lefkowitz), Amilcare Ponchielli. So which of his pieces has survived over the centuries? Surely you have heard of “Dance of the Hours” from the opera La Gioconda. While you may not know the title, you certainly know the song. Famously used in Disney’s Fantasia, this piece is the background for the tutu-wearing elephants. Keeping the piece light and airy is a key and having notes played spot on from the woods and winds is fun and exciting. As I listened I looked around the audience and smiled at the reaction when another familiar theme arose, “Hello Mudduh, Hello Fadduh” by Allen Sherman. Such incorporation of classical themes into popular culture

Mr. Lefkowitz conducted the Louisville Orchestra while simultaneously playing solo violin, using his head and shoulders to prompt the musicians. It reminded me of a time that the great Leonard Bernstein directed his orchestra using only his eyes. It speaks to the talent of Mr. Lefkowitz and the members of our orchestra that they could achieve such an intuitive interaction.

In closing, Mr. Lefkowitz stated that his being on the podium and playing this remarkable music has been the highlight of his time with the Louisville Orchestra. Maestro, it has been our pleasure to listen to you. Hope to hear and see more of you in the near future. 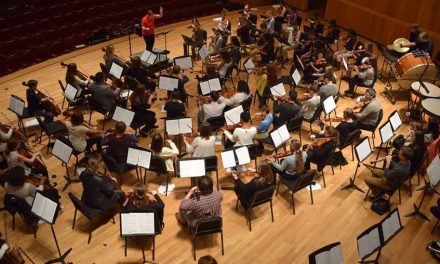 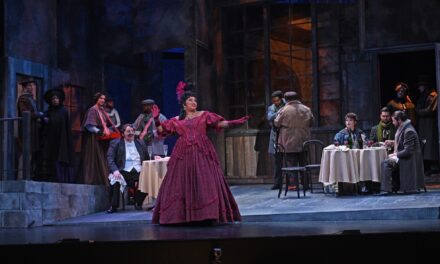