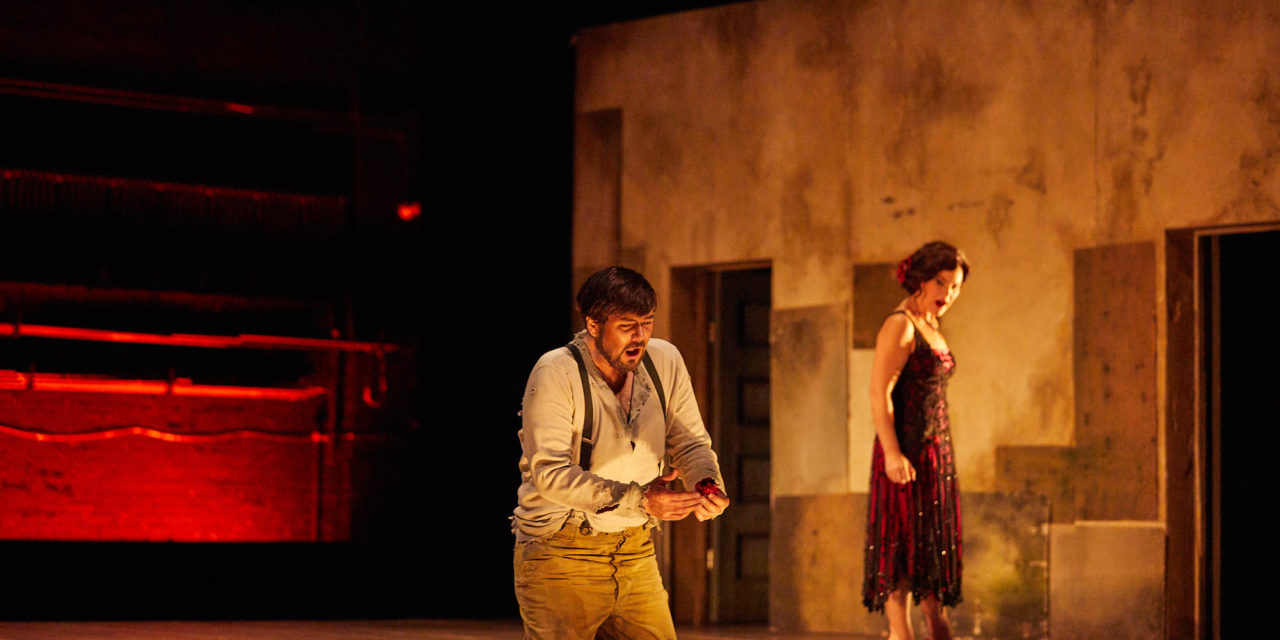 La Carmencita. She is the epitome of beauty, talent, brains, and sass. Through the timeless music by Georges Bizet, we get to know the wily Carmen and her Romany family. Another thing that we learn is that the title character is a victim of abuse. Almost every production that I have seen and/or been in has had Carmen as a strong woman, but rarely does she get to fight off her offenders. However, the Kentucky Opera took a different approach to Carmen’s portrayal.

The story is set in mid-20th century Seville, where soldiers mill around the courtyard waiting for the lovely ladies of the cigarette factory to emerge so that they may interact with them, often in crude and lascivious ways. It is when Carmen (Elise Quagliata) comes on the scene that the men swoon, but she lets them know straight away that she will never be a caged bird for any man (Habanera). She does notice the young captain Don José (Dominic Armstrong) and sets her sights on him by sharing the flower from her hair. He waves the gesture away. When the ladies return to the factory, Micaëla (Emily Albrink Katz) visits Don José to share news from his village and his mother. He shares his love for his mother but dismisses Micaëla to go back home.

A violent altercation with a fellow worker prompts Lt. Zuniga (Timothy Bruno) to place her in Don José’s custody. He is imprisoned after helping her escape and they are reunited at the local tavern owned by Lillas Pastias (J. Barrett Cooper). But their fate is to again be separated and be forced to continue to struggle against great odds to once again be together.

I certainly wish that I could say that everyone lives happily ever after, but as Carmen, herself foretold, that ending was not in the cards.

I mentioned earlier that this production of Carmen was a bit different and I will not share what those differences are but suffice it to say that Carmen has a little bit more control, a little bit more power, other than her magnetic sexuality. That budding strength makes us hope that the paradigm shifts in her favor. I appreciate the Kentucky Opera production team, director Dan Wallace Miller and General Director Barbara Lynne Jamison’s vision in addressing the issue of abuse in a creative and memorable way. To drive the issue even further, the Kentucky Opera has been working with community agencies such as the Center for Women and Families, among others, to address these issues that still permeate and destroy our collective everyday lives.

Musically, Carmen has some of the most recognized melodies in all of the music, so much so that you can often hear samples of the Toreador song or the Habanera in modern music and certainly in movies, TV shows, and cartoons. Under the baton of Joseph Mechavich, our Louisville Orchestra was true and passionate to the beloved score.

Alexander Scheuermann’s Remendado and Adrian Sanchez’s Dancaïro were nicely sung but could have used some oomph. It can be said for Bridget Cappel’s Mercédès and Chelsea Miller’s Frasquita. I think each bandit could have used a bit more energy. Timothy Bruno’s Zuniga had a good swagger and was easy to understand and hear.

As Micaëla, Emily Albrink enveloped the role of a young adult who is trying to be brave and earnest in the face of power and criminals. While I feel that her delivery of Parle-moi de ma mère! seemed a bit timid, her C’est les contrabandiers le refuge ordinaire was more comfortable.

One of the most memorable occurrences of the evening was the entrance of Richard Ollarsaba’s Escamillo. Donned in a beautiful pin-striped suit, dapper to the nines and with a tight barbered scruff, he was a vision of want and desire. But as he began to sing the Toreador song, I know I heard one or more members of the audience, if not the singers on stage, make an audible gasp of “Wow”. And deservedly so. Rich undertones and a velvety top make his Escamillo one of the best that I have heard in recent past.

I did enjoy Dominic Armstrong’s Don José as he did well with the acting side of the role, especially when he spiraled out of control because of his “love” for Carmen. What I also appreciated was that he wasn’t like other Don Josés that I have seen in the past, in that he, on the whole, actually had some respect for women. As for his singing, he is a lovely tenor to be sure, but there were some higher notes that fell a bit flat. Perhaps his strongest song was La fleur que tu m’avais jetée that he sings to Carmen.

I would venture a guess that this is not Elise Quagliata’s first time portraying the titular character. To me, it looked like she has developed this role as her own as there were nuances of singing, dancing, and acting that I hadn’t heard/seen in other productions. For instance, in the Habanera, her phrasing seemed rushed at times. Also, in Tra-la-la, while acted with flirty abandon, it didn’t have the breath control that I felt was needed to reach the back of the house. These could all be a matter of artistic choice, but I personally like to hear all of the luscious notes. Her portrayal of the solid, confident Carmen was brilliantly executed, especially in her interactions with the guards. At no point did I see a wilting flower, only a woman who is strong in her convictions and will, who revels in the feeling of freedom that she has.

A nod of appreciation to chorusmaster Lisa Hasson and her assemblage of talent within her chorus. Within this production, I saw one of the most diverse groups that I can remember in recent memory. I know that when you get a crowd of choristers on stage, it is difficult to hear each other and see the conductor, but there were times that the cutoffs were rather sloppy and individual voices were heard. The children’s chorus was entertaining and well-rehearsed.

While I liked the direction that Dan Wallace Miller gave this version of Carmen, there were a few things that I think could have used some help. First, where was the energy? The first half of the evening I couldn’t find much pizazz. I want to be electrified when Carmen is telling every creep in town that she cannot be enticed. I also want to root for Don José to turn the narrative on its ear and follow the advice of his dying mother. But I didn’t feel that drive. Second, and I hesitate to bring this up but I do because it has been talked about by other patrons, the full-on make-out session between the choristers seemed a tad too long. I heard someone behind me whisper “Get a room”. Third, I would have liked to have seen subtle pops of color, other than Carmen’s flower, in the first act. This lack of color may have added to the low energy. Fourth, in the last scene, the arrival of the Toreadors was just uninteresting, save for the bullfighting skit.

I was not really impressed by the sets from Glimmerglass, which I am rather surprised about. I would have liked to have seen something else on stage, other than chairs, a desk or table, that would give some semblance to a courtyard. The curtain and lights used to turn the stage into Lillas Pastias’ tavern worked but seemed simple.

J. Barrett Cooper was also the fight coordinator and I enjoyed his direction for the frequent fights that did break out. The cigarette girls’ fight was quite good.

I applaud the direction that the Kentucky Opera is taking in addressing important issues of the day and for that I say…. 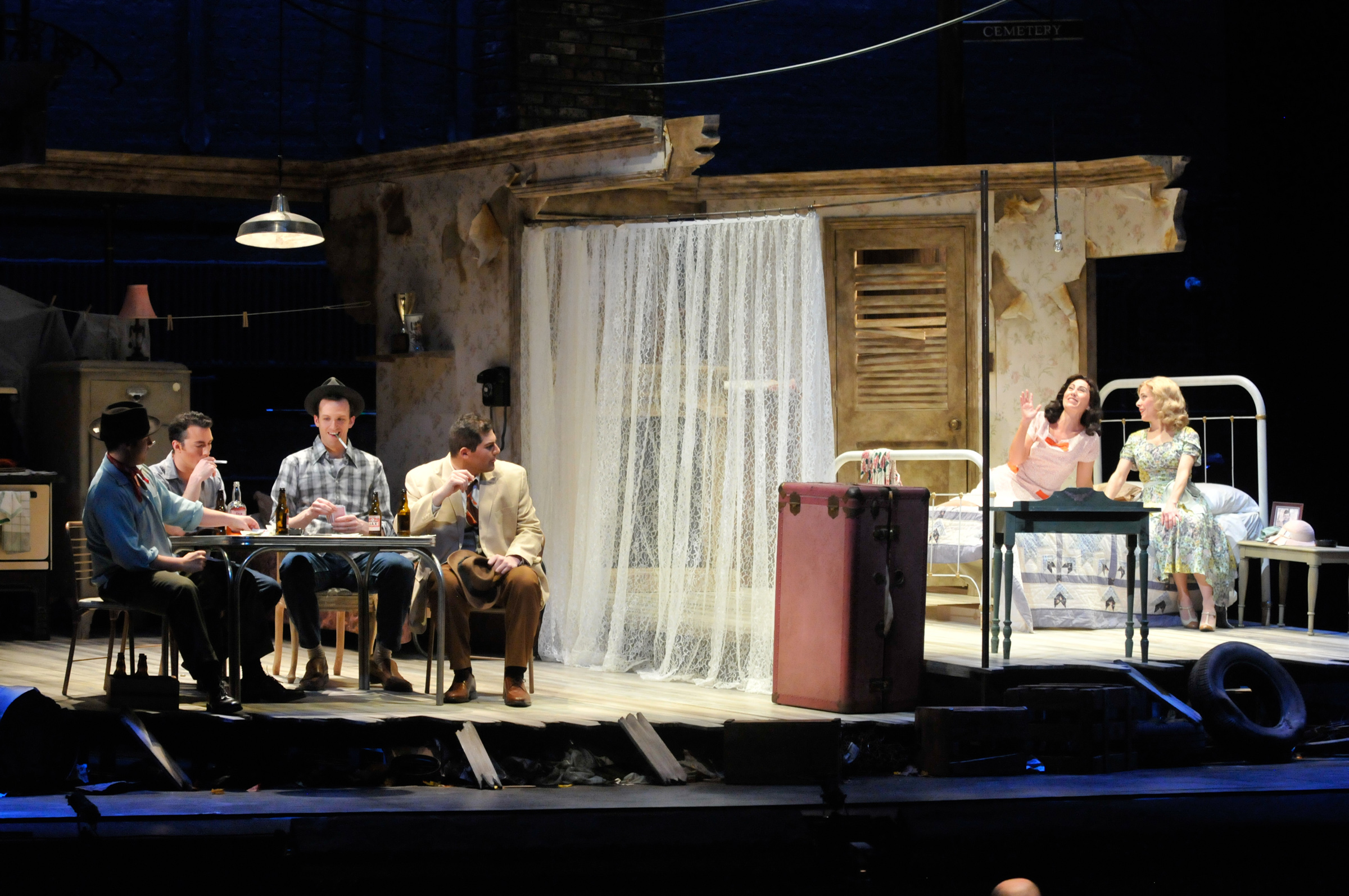