A decade anniversary is never to be ignored, but for an arts organization, it always seems to be more significant; perhaps ANY milestone is meaningful when just to exist at all can sometimes feel like an uphill battle. Va Va Vixens began a decade ago as an ad hoc attempt to mount a burlesque show. Burlesque is rather chic these days, but when Christiane Love launched the group in 2009 through Art Sanctuary the connotations originated from a prurient point-of-view that imagined a more scurrilous adult entertainment; the kind that husbands can’t tell their wives about.

Of course, that canard is so ancient you have to clear the cobwebs off of it just to hear it creak. In truth, a typical Vixens audience is made up of couples of all stripes, people exulting in free expression and expressiveness with a definite rock and roll sensibility. Even the most prudish folk would be hard-pressed to not appreciate the talent involved.

Lisa Frye (right of center-top) with the company just before the curtain goes up. Photo: H.H.H. Photography

“The first show was pretty rough. We were still figuring out what we wanted to do,” explains Lisa Frye, the current Artistic Director for the group. Frye is a co-founder of Art Sanctuary, which was then mounting art events in living rooms – pop-up shows and performances produced on a shoestring. By the time Art Sanctuary moved into their present home at 1433 South Shelby Street, the Vixens had developed into a company full of what a 2013 Arts-Louisville reviewer described as, “… amazing talent, skill, grace and art — and it is beautiful.”

Sexuality remained essential, but trained acrobats, dancers, actors, and singers were drawn into the troupe, with aerialists executing sometimes breathtaking routines on the trapeze, silks, and other apparatus. As the old model of the circus declined, Va Va Vixens connected to the human circus arts that were gaining in popularity, and many of the shows were located for several years at Headliners Music Hall.

The mystique is upheld by the fact that the performers are often not known by their true names but flashy and often suggestive sobriquets such as Tuesday Morning, Mr. Jinglepants,

“We spent literally years working to make this building ready to be the permanent home of the Vixens,” says Frye. The monolithic structure on Shelby Street contains a sprawling interior that houses individual artists’ studios and a gallery, but bringing things up to code to allow for a seated audience proved to be quite a hill to climb because the building itself was actually zoned differently depending on where you stood. 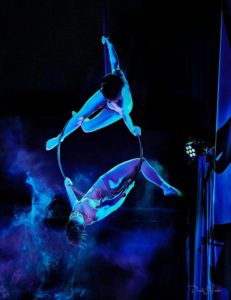 So the Vixens actually went back and forth between some limited public shows at Art Sanctuary and larger productions at Headliners, Remembers Frye,”I think we did a New Year’s Eve combo with Blue Moon Circus in the gallery, then a combo show with Vice Tricks, and a Halloween Show, but, our first full production in the big room at Art Sanctuary was Va Va Vamp in October 2017.” Of that show, Arts-Louisville said: “It is a stirring realization of the company’s fullest potential, the blending of artistry, overt sexuality, and self-referential pop culture that sets Va Va Vixens apart from any other theatre troupe in town.”

Now members of the company are working diligently to make Tapestry of Variance the most memorable Vixens show ever. “Artist/designer Erika Williams and I have collaborated to create a set specifically to integrate the idea of an interwoven tapestry of various found objects, patterns, colors, and materials. I wanted this one to feel more like a theatrical/performance art event in addition to our normal antics. We also have a new apparatus that we will be introducing to the stage. I can say that this show pushes our boundaries a little more than usual. I think people will see a lot of surprises.”

Tapestry of Variance: Celebrating a Decade