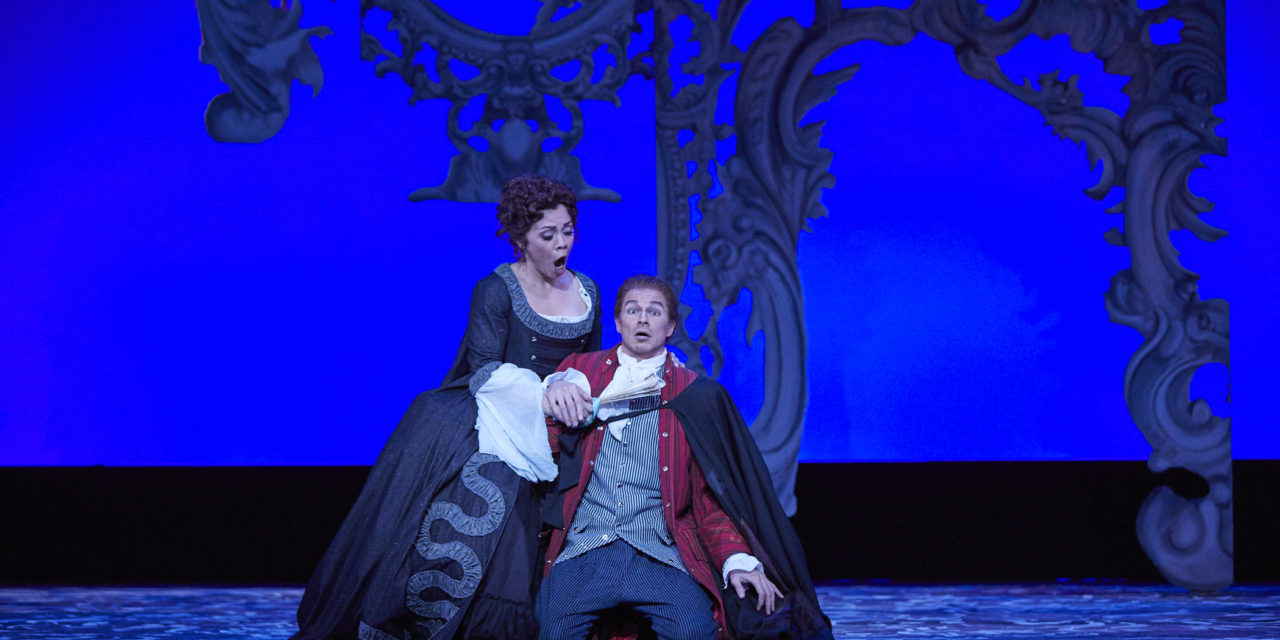 Mozart’s Le Nozze di Figaro is a comedic farce where lessons are learned and true love prevails, but at its core, it is a look at class struggles and infidelity.

Continuing the story of The Barber of Seville, Figaro the Barber (André Courville) is preparing to wed Susanna (Tess Altiveros) who serves as a chambermaid in the court of the Count and Countess Almaviva (Brian Vu and Amber Monroe, respectively). While measuring the space that will serve as the couple’s wedding bed, Suzanna warns Figaro of how close their new chambers are to the Count. As they get ready, Figaro’s enemy Dr. Bartolo (Zachary Owen) comes to settle a score, using his servant Marcellina (Rebekah Bortz Hardin) as the bait. When a loan was given to Figaro, it seems that a marriage contract was drawn between Marcellina and Figaro. As Suzanna laughs off this curveball her beloved cousin Cherubino (Magda-Sophia Gartner) comes into the Count’s chamber and tells of his fear of the Count because he was caught with the gardener’s daughter, Barbarina (Chelsea Miller), which then caused the Count to send him to the battlefront.

The Countess knows of her husband’s dalliances and his fondness for Susanna. While she is heartbroken about it, she knows that Susanna wants nothing to do with the Count. A plan is devised to help assist Cherubino in his escape from the military. Meanwhile, the sneaky music teacher Don Basilio (Alexander Scheuermann) starts to spread gossip about Cherubino and becomes a strange bedfellow to Dr. Bartolo and Marcellina. As Figaro devises a clever ruse to avoid marriage to Marcellina, Susanna is hard at work in fighting off the Count’s advances.

The customs and beliefs of 1784 may seem strange to a 21st Century audience. Da Ponte borrowed from Pierre Beaumarchais’ stage comedy La folle jounée, who also wrote The Barber of Seville. While the pieces are Opera Buffa, the monarchy of the time felt that parts of Figaro were objectionable. But after some re-writes, the libretto was approved and Mozart set to writing the music to this day one of the top 10 operas performed around the world. What could be so objectionable? Could it be the philandering? Could it be that wealth and power are made fun of? Could it be the forcible taking of a maiden before her wedding night by nobility? It makes one think, doesn’t it?

I applaud the Kentucky Opera for reaching out to our community leaders and having public discussions as it pertains to some of the more perverse and socially dysfunctional aspects depicted within this masterpiece. I am hoping that some healing and understanding came out of these dialogues.

The cast and crew did right by the nature of the writing and music. Of the smaller roles, Adrian Sanchez as Antonio and the aforementioned Chelsea Miller as Barbarina sounded nice and effectively played their respective characters. It can be said of Alexander Scheuermann, whose portrayal of Don Basilio had just enough grease and grime to make it interesting.

Ms. Hardin’s Marcellina sounded youthful, despite her being “older”. She looked to be having a lot of fun. However, there were a few spots where it was difficult to hear her. Now, on the flip side, Mr. Owen’s Dr. Bartolo was exactly where it needed to be: a bit sinister with a dark, older tone.

Admittedly, I have a soft spot for the role of Cherubino, having performed him myself, so I was curious to see how Ms. Gartner would tackle it. I certainly saw a lot of energy and her voice is most definitely suited for the coveted breeches role. I did hear her take some chances with her two arias, “Non so più” and “Voi che sapete”, changing some of the stylings of those songs, such as adding trills in the vocal line that is more commonly found within the winds. Still, very nice and very strong.

Mr. Vu as Count Almaviva was smarmy and smooth and his lovely baritone carried throughout the house rather well, for the most part. There were a few spots where the lower register was hard to hear. And while we are speaking of smooth singing, where did the Kentucky Opera find Ms. Monroe? As the Countess I could hear her sorrow, I could hear her plotting; I could hear a voice that I want to hear again and again. “Dove sono i bei momenti” was moving.

Mr. Courville’s Figaro was just as I want my Figaro to be: smart, brash, clever and silky smooth. Now, while he certainly did sound good, there were times that his top notes got swallowed a little bit, which I understand happens, but I like to hear that brightness from a bass when we can. His performance of the famous “Non piú andrai” was near perfect. Aside from his own solo arias, he paired beautifully with Ms. Altiveros, especially in the duet “Pace, pace, mio dolce tesoro”.

Don’t let anyone tell you all opera singers do is “park and bark” as they perform on stage. Luckily for us we got to watch Ms. Altiveros absolutely own her role as Susanna. Aside from the physical side of her portrayal, she also has a lovely voice to match, as well as great comedic timing.

The chorus did well for the most part, but I would have liked a bit more energy. It was a tad on the lethargic side. Come on, you got invited to a wedding…. let’s rejoice in that. Our Louisville Orchestra, under Tyson Deaton, could have been a little tighter, but I did enjoy hearing the harpsichord.

It is imperative to this type of opera that you have singers of skill to navigate the highs and lows of such writing. The Kentucky Opera did well in the casting.

The lighting design by Thorn Michaels fits the timbre of the moments with subtleness and clarity. I especially liked the purple and red hues that emanated from the backdrop of the Court of the Count. Speaking of the Court, the scenery was simple and elegant at the same time. Using an ornate drop-down set that looked like something off of a mirror or frame (locally made according to General Director Barbara Lynne Jamison) it served as a focal point as well as the walls of both the bedrooms and the garden court. Now, while I loved the design, I noticed something odd about it at different points. When doors were added to the drop-down set, the voices didn’t seem to carry as well into the audience, almost as if the sound was being swallowed by the addition to the set. Perhaps that was just coincidence, but it happened more than once. Also, while I liked the design of the floor, I was concerned for the performers as it looked as if the cloth was not tacked down completely because you could see billowing coming from the cloth as the performers moved about.

While the costuming, by Elizabeth Whiting, looked and felt like it belonged to the era, it was the choice of footwear that had me raising an eyebrow. Converse tennis shoes, Toms, and espadrilles seemed anachronistic for the 1700s, even if a lot of the clothing looked to have a denim-like quality.

Director Kelly Kitchens took some chances with slapstick humor and designs and it paid off well. There were also chances taken as it pertained to the sexual overtones of the piece, the touching of the ladies, the use of a riding crop – subtle, but noticeable. However, I didn’t care for the ending of the second act, it just seemed jumbled. What I did like was the end of the last act, where there was time given to embrace the music and the moment.

I believe that the 2019-20 season was a very successful one for the Kentucky Opera and appreciate the outreach that they have created within the community. I congratulate the team and the diligence and drive that they put into their craft. I look forward to next season. It looks tantalizing. 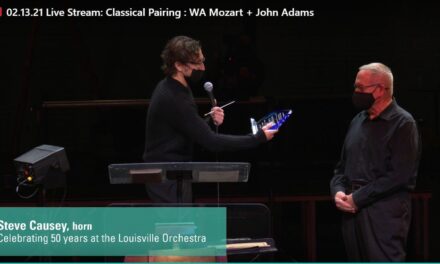 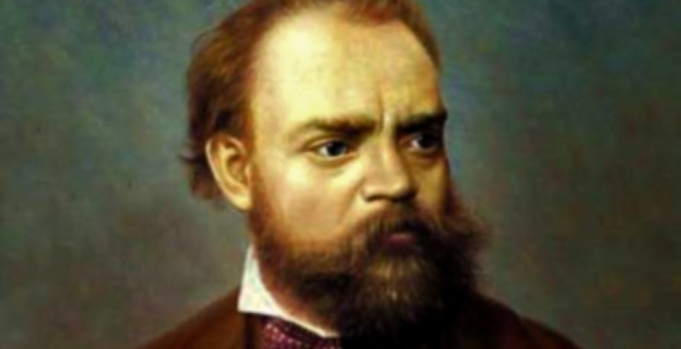 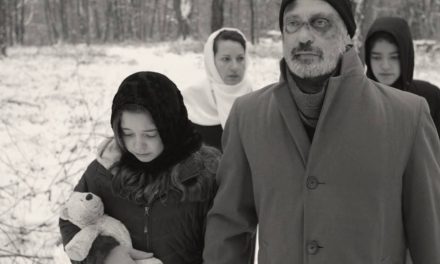 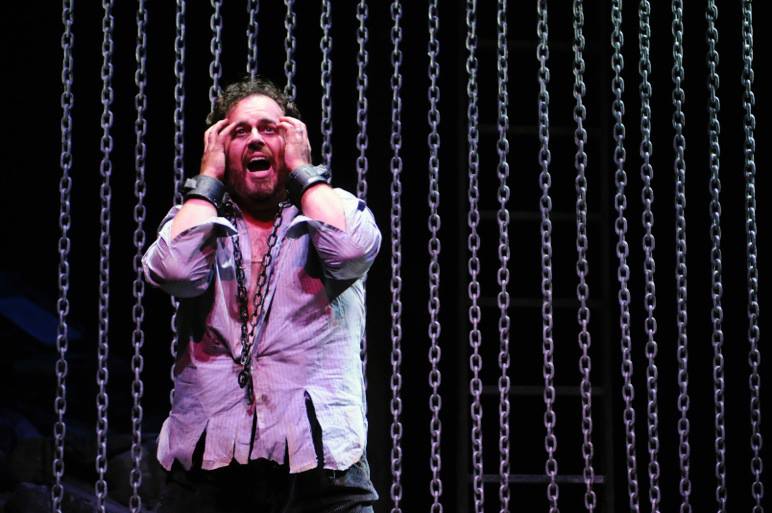