A musician’s brain is a marvelous thing. Often, musicians and their music lend themselves to be a bit enigmatic; hard to understand or decipher, and wrapped in riddles.

Lucky for us we have experts like Teddy Abrams who enjoy delving into and sorting out the quagmire that can be music composition.

Mr. Abrams started “Teddy Talks….”, an ongoing series, shortly after he arrived in Louisville. He selects a composer and a respective work and he shares with the audience a new way to listen and/or appreciate the chosen piece. To be honest, had these talks been around when I was attending school, I may have been able to skip quite a few of my musicology classes.

The subject for this proghram was Franz Schubert’s Symphony in C Major, D. 944, also referred to as “The Great”.

While Schubert was certainly successful during his all-too short thirty-one years  this piece found success posthumously. When he first presented the composition to Vienna’s Gesellschaft der Musikifreunde (Society of the Friends of Music), they exclaimed that the piece was overly long and too demanding of the players. It seems that this was a common response from other companies of the period.

After Schubert passed, fellow composer Robert Schumann asked the composer’s brother for access to the manuscripts. When Schumann came upon this now revered piece in a drawer, he shared it with another composer, Felix Mendelssohn who was able to bring the music to life and premiered the piece with the Leipzig Gewandhaus Orchestra in 1839.

After “The Great” was published a year later, it became a part of the symphonic repertoire, with phrasing that has been named “heavenly length” which quickly became part of the musical lexicon.

The first movement, Andante (where the heavenly length can be found), begins simply with two horns with a rising motif, C to D to E. Throughout the orchestration, Schubert is a fan of the three-note rising motif as well as within key changes. But something interesting that Mr. Abrams noted is that there could be a hint of klezmer influence in the use of trilling within the woods and winds.

Schubert recognized the need to use big scale form and counterpoint in compositions and that using these tools helps to make the notes and phrasing explode.

As Teddy stated that the second movement, Andante con motto, could serve as a great piece to use as a sampler by artists such as Eminem. It has a great walking tempo and features a magical oboe and clarinet cocktail. And what exactly does that sound like? The two distinct instruments are almost indistinguishable in their sound when they share a small and simple duet. Wow. I believe Principles Alexandr VVedenskiy and Andrea Levine graced us with that exquisite experience.

Mr. Abrams reminded us that composers often borrow from each other and this piece is no exception, in that some of the instrumentation that lends itself to sounding like Pachelbel’s Canon and towards the end, there are similarities to Beethoven and his 7th Symphony. Teddy stated that he wasn’t sure if Schubert was influenced by Beethoven or had the opportunity to listen to him, but it could have occurred.

Before the third movement, Scherzo, he reminded us of the use and repetitionof the rising thirds. The lengthy scherzo and trio were written in a sonata form. I did I hear a hint of music that perhaps John Williams borrowed for the soundtrack to the movie, “E.T.” I think it is quite possible. And while the movement is written as a sonata, I found that there were moments where it felt as if it could have been danza.

The Finale movement presents challenges for lesser trained musicians. Fortunately, our Louisville Orchestra is well versed in accepting challenges and overcoming them with aplomb.

In the structure of the orchestration, there is not a lot of detail as to what the time is to be, so therefore it is left up to interpretation. There are also many themes that adorn the movement, as well as a surprise or two. One such surprise gives a nod to Beethoven once again, the other is what Teddy calls the Great Fake Out, where when you feel that the tonic is about to be reached but then the piece bounces back to the main theme.

Teddy observed that during rehearsals ideas are often shared and put into place, such as Concertmaster Gabriel Lefkowitz sharing that if the strings used the technique of ricocheting, where the bow strikes the strings with a bounce, would give stronger, more expressive notation, and is less tiring to the instrumentalist. This technique was used most effecively in this fourth movement.

Mr. Abrams admitted that he could spend hours talking about the piece, but closed his “class” by sharing a neat trick that the bass employed. In a two-minute interval, the bass climbs the musical scale.

The orchestration, if performed as it is written, is quite long as there are many repeats, but Teddy shared that for this evening, the Orchestra would perform only the third movement repeats. A wise decision to be sure. 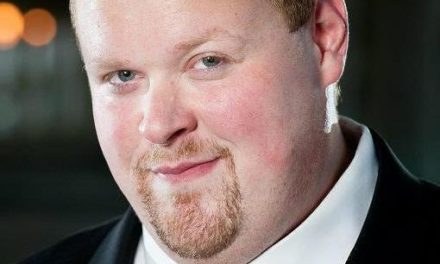