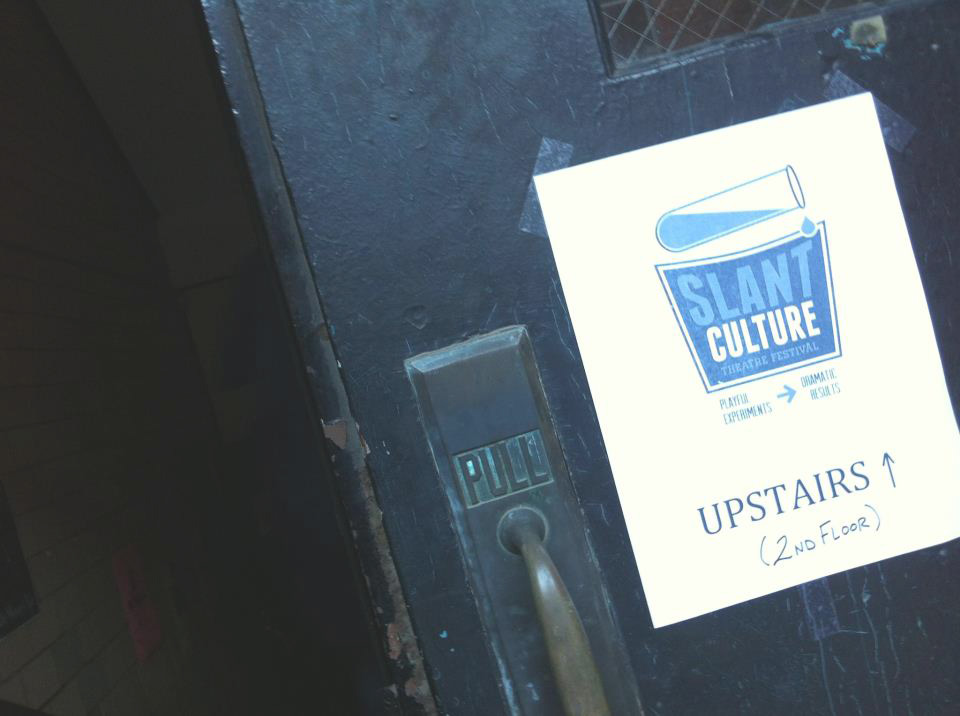 Ambitious Collaboration Pulls Local Theatre Groups Together for Ten-Day Schedule of Events
By Keith Waits
Entire contents are copyright © 2012 Keith Waits. All rights reserved.
Louisville hosts a rich and varied theatre scene, with a wider variety of companies, both professional and non-professional, than the average citizen might assume. A new festival seeks to help increase both awareness and active participation with at least some of these semi-professional theatre companies in the inaugural year of a challenging theatre arts festival.
The SLANT Cultural Festival is an extension of the SLANT series of contemporary plays that Walden Theatre Managing Director Alison Huff initiated four years ago under the direction of Associate Artistic Director Alec Volz; but Walden Artistic Director Charlie Sexton was also inspired by his memories of visiting the Fringe Festival in Edinburgh, Scotland in 1987. While he is careful not to draw too direct a comparison to that legendary arts event, he is clear enough in defining what the ambitions for the festival are: “…This is a fest that fits those parameters and virtually every city our size and larger has a fest of the ‘fringe’ variety, some hugely successful.” Mr. Sexton continues: “We feel strongly that grass roots theatre and theatre that hires local professionals has been steadily growing and improving in Louisville and it has attracted a diverse following. We hope this brings a good deal of attention to this trend and the younger audience we are hoping to attract will take note.”
That younger audience, and Walden’s mission for theatre arts education, is key to the philosophy behind SLANT, which takes as its signature motif a test tube angled to promote greater growth – a “slant culture.” Ms. Huff, who as Festival Producer had the idea of placing a range of groups and styles in such close proximity, hopes to cultivate a hothouse of creative energy and artistic exploration that forcefully reinforces the growth experience for Walden students and extends that challenging environment to the broader audience. It is a potent formula that festival organizers hope will deliver a unique experience for attendees.
There are certainly many groups that would be a great fit for the SLANT Culture Theatre Festival; but for the pilot year, Walden has concentrated on inviting companies with very close ties to the organization to participate as Producing Theatres (some of the groups share staff and/or Board members): Le Petomane Theatre Ensemble, The Louisville Improvisors, Savage Rose Classical Theatre Company, and Theatre [502]. At press time, presentations by Squallis Puppeteers and ART+FM had just been added to the schedule. In the coming years, once they get a handle on the logistics and build momentum, Walden plans to open up the process and take submissions with participants chosen through a juried process.
As to what the value of such a festival is to the participating companies, as well as to the theatre-going public, Gregory Maupin of Le Petomane believes it will cross-pollinate each group’s core audience: “A festival like this feels like it really has the potential to bring several audiences together that might not normally intersect and experience things that they’ll get a great deal of pleasure out of. I don’t know that the people who go see The Louisville Improvisors or shows done by Walden students come out to a lot of Le Petomane shows or Savage Rose shows. For example. I mean, surely there’s overlap – this is not a huge town in that respect – but it’s not as much overlap as you’d think. And this is a chance for us to say to Le Petomane’s audience, “Hey, you’ve enjoyed us so much over the years – been going to these Theatre [502] shows? You really should.”
The material being presented includes the Louisville premiere of D.W. Gregory’s new play Salvation Road by Walden; a rare production of Luigi Pirandello’s The Man With The Flower in His Mouth from Savage Rose; an evening of improvisational comedy built around a book-reading by various local authors from The Louisville Improvisers; and remounts of past productions by Theatre [502] and Le Petomane Theatre Ensemble.
There will also be a variety of other activities, beginning with a Gala Opening Night Event on November 8 featuring music by Cheyenne Marie Mize and Joel Henderson & the Forty-Gallon Baptists; and each evening will include an After Party at various alternating venues, including The Bard’s Town, Decca and Meat. Different types of workshops and other items were being added to the schedule. Check the SLANT website for updates on the schedule:
http://waldentheatre.wordpress.com/2012/09/28/the-slant-culture-theatre-festival/
Le Petomane Ensemble Theatre Presents 5 Things
“…Well-timed wit and intellectual buffoonery typical of a Le Petomane performance, carefully balancing a celebration of geeky self-absorption with a healthy satirical perspective.” – Arts-Louisville review of the original production
It will be such fun, I think, to take something we do – our own little brand of original comedy/music/whatever-it-is – and put it in a context of such different performance styles, so many companies, with very different methods of putting things together. The only real regret I have about participating is that it will significantly eat into my festival-going time. – Le Petomane member Gregory Maupin

Theatre [502} presents The Debate Over Courtney O’Connell of Columbus, Nebraska
“In just one year Theatre [502]’s audiences have grown exponentially, and we’re excited to remount our first production, Mat Smart’s The Debate Over Courtney O’Connell of Columbus Nebraska, so we can share our flagship show with new fans.
Everyone involved would like to see the Festival become a new Louisville institution. It certainly has the potential to become a sought-after performance opportunity for every theatre company in Louisville and eventually a way to bring work from across the country to our audiences. I would like to see this become a regional destination for artists and audiences.” – Theatre [502] Co-Artistic Director Gil D. Reyes

The Louisville Improvisors Presents Buy the Book
“After we all toured the Amazon together for the USO last year, we have been itching to work together again, and this festival was the perfect opportunity to do that. Besides we still have all our shots. Our goal for the festival is the same as always, to do great shows, hang out with our friends, have fun and most of all reshape the world in our own image.” – Louisville Improvisors member Chris Anger

Savage Rose Classical Theatre Company Presents The Man with the Flower in His Mouth
Set in an all-night café, two men explore in words and silence the tactile world around them. The infinity of imagination and the finality of life can be found in a ribbon, an armchair or even a handful of grass. The Man with the Flower in His Mouth is a beautiful and compelling piece of theatre presented in an intimate setting, allowing each member of the audience to be both on-looker and participant.

Two guys. One rusted out Honda. Twenty-four hours to separate a girl from her guru. The road to Hell was never more fun. When his hip older sister Denise disappears with members of a fundamentalist church, 17-year-old Cliff Kozak struggles to hold it all together, pretending that he isn’t hurt by her decision to cut him out of her life. But a year later, a chance sighting of Denise at a New Jersey strip mall leads Cliff and his best buddy Duffy on a road trip into the heart of a deepening mystery. Why would a smart and talented girl like Denise fall for the hollow promises of a sleazy preacher? Could it be that blind faith is just another term for a desperate need to belong? 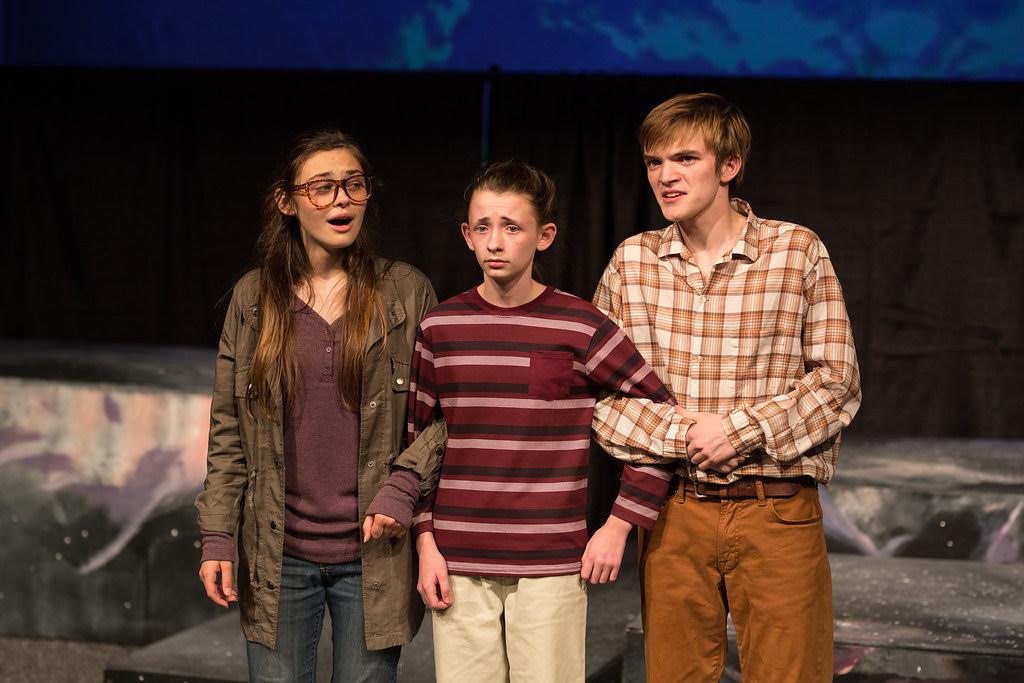