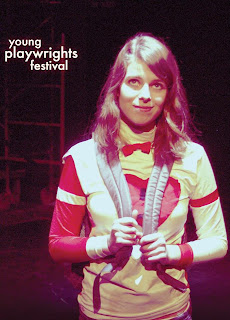 2013 Young Playwrights Festival
Reviewed by Kathi E.B. Ellis
Entire contents copyright © 2013 Kathi E. B. Ellis. All rights reserved.
This year’s Young Playwright’s Festival at Walden Theatre brings us only six short plays (by five playwrights), down in number from last year. The short evening was eclectic in theme and quality.
Maggie Eskridge’s writing brought us both the most assured and problematic pieces of the evening. Me Against Myself is a monologue. Callie is in counseling for the first time, doesn’t want to be there, doesn’t really know what’s expected of her, and just starts talking. Ms. Eskridge’s language feels authentic; the way Callie talks (and doesn’t talk) about her parents and her life is a strong teen world view. During this short piece, the audience can feel that they get to know Callie and, judging from the smiles and chuckles in the house, get to understand (or at least recognize) her point of view. In this production, it’s not always clear if Callie just stops talking or if she occasionally responds to the out-of-sight counselor. In the convention of one-person plays, I would encourage Ms. Eskridge to clarify in the script that Callie’s need to speak and to be silent is entirely self-generated so that the audience can completely focus on this articulate and vulnerable character.

Her What Should I Say, which followed the former piece in the program, is an interesting script but not as successful as the first. Chase is waiting for a date at a nice restaurant. His server, Amber, has an attitude. Liz, the date, arrives and it’s clear this is going to be an awkward first date. He spills the wine, gets dressed down by the server, disappears to the restroom, the server and the date discuss relationships between men and women, the date leaves, and the server and Chase sit down over drinks. Ms. Eskridge clearly has something to say about gender roles. And that’s great!  However…
Theo Edwards-Butler offers Fault, an uneven script with some heartbreakingly authentic moments when Laurel tries to come to terms with the death of her father. Ms. Edwards-Butler’s writing is at its strongest when we hear Laurel struggle with her guilt over her father’s shooting death as he comes to pick her up from a late-night party, and the conversation between her and her mother also rings true. Structurally the script calls for two flashbacks in two different locations and two locations in the present; and in a short script, this many locations can be problematic. This production presents all four locations discretely and realistically, which interrupts the flow of the storytelling that in turn impacts the emotional intensity of the final scene – which should be unbearable for Laurel. The scene, which is least successful, is when Laurel and her mother are interviewed by the police officer; do we need to see that? Could it be more powerful for Laurel’s recall of that final moment to be something that comes to her repeatedly – without an outsider having to ask her what happened that night?
It was good to see three playwrights returning from last year (and Maggie Eskridge wrote for the 2011 festival). Lucy Fitzgerald’s Election Is a Bitch is a fun conceit with a very contemporary resonance—what happens if the presidential election is a tie. She raises the stakes by asking and answering the question in front of ubiquitous TV cameras, with the answer held by the politically indifferent cameraman. In our current 24-7 live streaming, tweeting, real-time world this conceit has potential. In this production it is not entirely successful. In part it is casting; in part staging. The announcer, who has the majority of the dialogue, did not speak clearly (an issue with several performers the night I attended) and rushed much of her dialogue. The sudden arrival of the two presidential candidates was both rushed and cramped; why do we see two non-speaking reporters? I wonder also that casting so many of these roles with middle school rather than high school performers – who are much closer in age to being able to vote – diluted the stakes of the characters. It was an intellectual exercise rather than one which has a personal resonance for them. I hope Ms. Fitzgerald will continue to work on this piece. It reflects on both the seriousness and absurdities of our electoral process and the denouement is delightfully quirky.
Travis Ryan returns to the festival with A Very Hitler Halloween. This three-person preparation for a Halloween event hits its marks with assuredness, provoking the audience to gasps and I-shouldn’t-be-laughing-at-this moments. A young man, Kyle, is apparently unaware (or unconcerned?) of the inappropriateness of dressing as Hitler, complete with moustache, for Halloween. It is always worthwhile to see a playwright take on a societal taboo, and Mr. Ryan is mostly successful. Jennifer clearly understands the taboo and is forthright in her indignation. Brent’s complete oblivion about who Hitler is, and thus why it’s a big deal, strikes me as an easy choice – would a teenager truly never have heard anything about Hitler? – and what if he knows something, but is ready to let that go because the costume and subsequent evening will be a lark? The final twist after Jennifer breaks up with Kyle brings a genuine, and possibly relieved, laugh to all.
Chris Lockhart once again takes the final position in the evening’s program with the, once again, longest piece of the evening, Redneck Verse. Mr. Lockhart has written a short play in rhyming couplets, a feat both for him and for his performers who navigate the rhyme structure with aplomb. Mr. Lockhart pulls out pretty much every redneck stereotype in this heightened-language movie-of-the-week scenario. The script and production are most successful when it’s clear that the characters, relationships and situations are being satirized.
Walden’s annual Young Playwrights Festival, in existence since the 1980s according to the curtain speech, is one of several area initiatives to nurture the next generation of playwrights. In a community that has a long tradition of new works, it’s good to know that future playwrights can get their start, not just in writing, but also to be produced, in middle and high school.
2013 Young Playwrights Festival
February 7-9, 2013
Walden Theatre
1123 Payne Street
Louisville, KY  40204
(502) 589-0084
www.waldentheatre.org 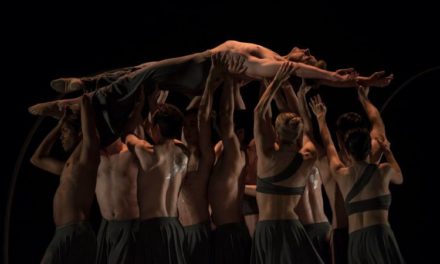 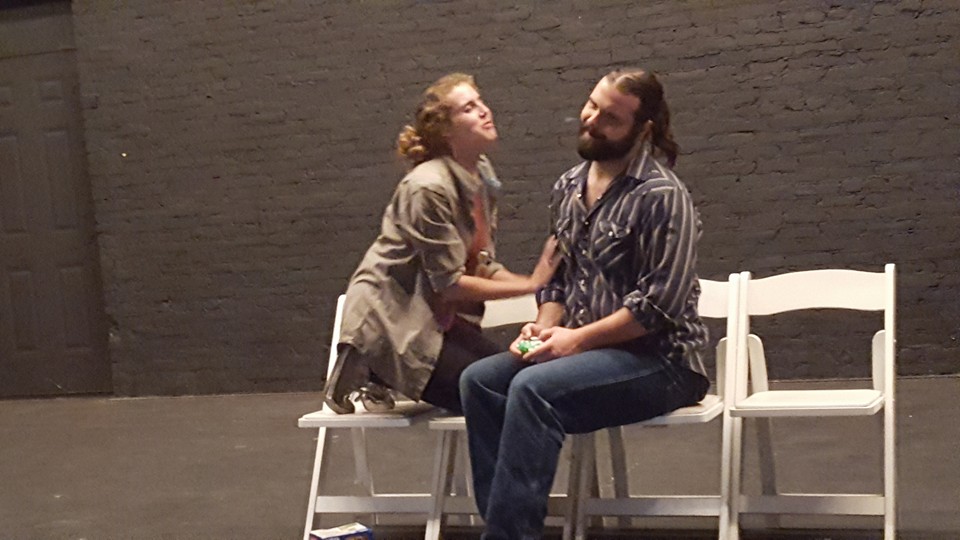 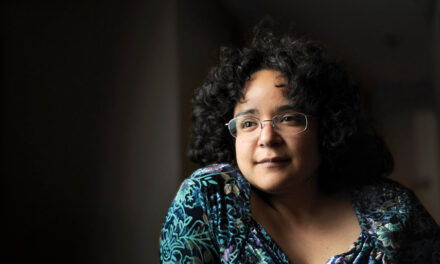