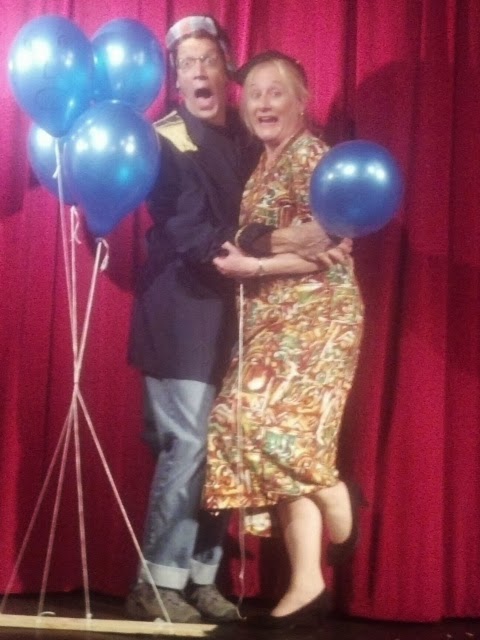 By Brian Walker
Entire contents are copyright © 2013, Brian Walker. All rights reserved.
Janet Morris is an actor, a director and an all -round nice lady. She’s passionate about theatre, but particularly about the people she does theatre with. She’s currently starring in Little Colonel Playhouse’s production of Southern Hospitality.
Brian Walker:  I’ve got 17 Questions for you Janet Morris, if you’ve got the time?
Janet Morris:  I’d be honored!
BW:  The honor is all mine. Okay, here we go. Number 1. You are in the middle of a production out at Little Colonel Playhouse called Southern Hospitality. What character do you play?
JM:  I play Mrs. Davidson, a comedic victim of mistaken identity. She’s a fun character….just a nice lady who gets caught up in the antics of the desperate people in Fayro, Texas. They end up pushing her over the edge.
BW:  Number 2.  Why is this a production Louisvillians aren’t going to want to miss?
JM:  It’s a screwball comedy that’ll make you laugh out loud. If you love to laugh, this is the show for you.
BW:  Number 3.  What’s the coolest thing about doing a show at Little Colonel Playhouse?
JM:  Definitely the people. I have directed several shows at Little Colonel as well as worked on stage there, and their board is very cooperative and helpful. Great people to work with! Plus it’s so close to home for me. It’s nice to have such a cool little theatre so near my own backyard.
BW:  Number 4.  Do you have any rituals you always do to prepare a character for performance?
JM:  I’m not a ritual person. I will do some research about the character and create a little back story. I also like to try things and experiment with the role.
BW:  Number 5. What’s the biggest thing that draws you to a project?
JM:  Good material. As a director, I look for shows that offer challenges to my creativity. If it’s a show I would enjoy seeing and would be fun to do, I’m in. I was drawn to Southern Hospitality for various reasons. Before the auditions, I was offered a role in a much more serious play, but I it turned down. A few months ago, I lost one of my best friends, Bryce Blair, to brain cancer. It has been a sad and difficult time for me and for my friends who share that deep loss. There are times when you just need laughter in your life. This is one of them. A screwball comedy like Southern Hospitality fit the bill very well. I also have had the pleasure of being directed for the first time by my friend Jeff Mangum in this show. The cast has been wonderful to work with. It’s just what I needed right now.
BW:  Number 6.  What other projects do you have coming up this season?
JM:  This season I am directing two shows for Mind’s Eye Theatre Company, a partnership between Jeff Ketterman and myself. The first is Spamalot, which will go up in February. We picked that as our first show because we both are huge Monty Python fans, and we can’t wait to start on it in December. Our second show will be a Hitchcock spoof called The 39 Steps. It’s an amazingly funny show, and offers some unique challenges.
BW:  Number 7.  Speaking of directing, you’ve also done quite a bit of that. For you, what’s the biggest difference between acting in a play and directing it?
JM:  I actually prefer directing to acting. I enjoy the process of bringing a show to life and seeing what I have in my head transferred to the stage. The skill sets are very different. The biggest difference is the director has to keep the big picture in mind at all times, whereas an actor focuses on her character and interacting with other characters.The hardest part about directing is casting. Once that is over, I enjoy every part about the process, from designing the set to watching it come to life on stage.
BW:  Number 8.  If you could direct any play without worrying about budget or logistics, what would it be and why?
JM:  Wicked. I think that would be incredibly fun. The tech involved would make it difficult for a community theatre to do.

BW:  That’s true – it is such a spectacle.  I guess you could always strip it down and do it black box. You’d probably sell out every night.  Number 9.  If you had to name one production that’s been your favorite to be involved with over the last five years or so, what would it be and why?
JM:  I can only pick one?! Wow. There’s no way to narrow it down. Way up on the list was directing Rent at Clarksville Little Theatre a few years ago. I had such an amazing group of people to work with in that show: actors, musicians and tech. We were all proud of what we created together. It was an amazing experience. Directing Avenue Q for Wayward Actors Company is pretty high up there as well. Again, it took a coming together of talented people to build puppets and scenery and to create that magical puppet world. I also have a special fondness for Assassins, which I did at CLT, because it was the first musical I directed, and it brought together two of my closest friends, Jason Potts and Carrie Chastain, who are now engaged. So, basically, every show I have directed can be listed as one of my favorite experiences for one reason or another. But it always comes back to the people I got to work with in those shows.

BW:  Number 10. What’s your favorite Louisville hangout?
JM:  I always enjoy Waterfront Wednesdays. I also like hanging out with my friends on the back porch singing show tunes and talking. It’s not really the place for me that’s important so much as the company I keep.
BW:  Number 11. What piece of advice would you give to someone looking to break into the local theatre scene?
JM:  Be hard working, cooperative, friendly, punctual, humble and responsible and you will be cast repeatedly. Oh, and talent helps, too. Don’t be upset if you don’t get cast in something. There is always another show.
BW:  Number 12. When you’re not entertaining local theatre audiences, what can you most often be found doing?
JM:  Spending time with friends and family.
BW:  Number 13. What do you think about allowing audience members to engage in social media while they’re watching a play?
JM:  I think it is distracting and rude. It’s appropriate before and after the show and during intermission, but not during the show. As a director, I can imagine all those glowing screens during blackouts at crucial moments spoiling the show. And I’m sure people will forget to turn the sound off, you know, because they do that.
BW:  Number 14. The Alley Theater is turning your favorite movie into a musical. What film is it and what role would you kill to play in it?
JM:  I love musical theatre, and my friends and I have a run-on gag about making really inappropriate movies or TV shows into musicals, or making any movie at all into a musical. Soooo….Shawshank Redemption: The Musical; Schindler’s List: The Musical; The Princess Bride: The Musical; Hogan’s Heroes: The Musical; Team America, World Police: The Musical; Monty Python and the Holy Grail: The Musical… Wait…We’re actually doing that one. I would normally rather direct than play a role, but if we did Princess Bride: The Musical, I would want to sing the rousing musical number “I’m Not a Witch, I’m Your Wife.”
BW:  Number 15.  If you had to sum it up, why do you do theatre?
JM:  It’s a creative outlet that allows me to spend time with awesome people, who make my life complete. All of my closest friends have come into my life through theatre. I am thankful that a job change ten years ago allowed me the time to be able to participate. My son dragged me to my first audition all those years ago. He got involved in theatre in high school, and he knew I would enjoy it, too. I remember how terrified I was auditioning for the first time. I was horrible. But Gary Tipton cast me anyway, bless him. The show was pretty forgettable, a fluff musical set in the ’20s…not my kind of show at all. But I had a blast doing it. So, I kept coming back.
BW:  Number 16.  What’s something you’re planning on checking off your bucket list in the next year or so?
JM:  I just checked it off. I retired from Jefferson County Public Schools after 27 years of service on October 1. For the past 10 years I served as Coordinator of Academic Competition for JCPS. I don’t know yet what I’m going to do next, but it’s very exciting knowing I can choose something I want to do rather than doing something because I have to make a living.
BW:  That’s amazing…congratulations! Okay, my last question and my favorite. Number 17.Who is someone who inspires you and why?
JM:  I am inspired by talented and creative people in general. Anyone who can write a good story, or create a film, or stage a show that sucks me in and makes me feel a part of that world is someone I admire. There are so many of them, thank goodness!
Southern Hospitality
October 3, 4, 5, 11, and 12 at 8 p.m.
October 6 and 13 at 2:30 p.m.
Tickets are $15 for Adults and $12 for Seniors (60+) and students. Reservations strongly recommended by calling 588-1557.
LCP does NOT accept credit cards, so please come prepared.
Little Colonel Playhouse
302 Mt. Mercy Drive
Crestwood, KY 40014
502-588-1557
littlecolonel.org 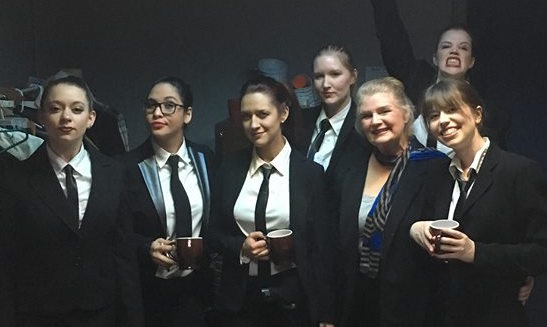