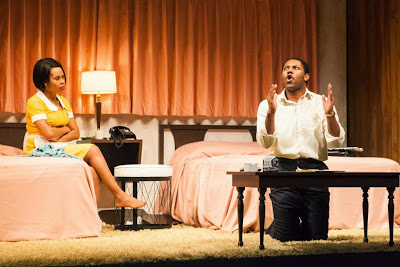 The Mountaintop
By Katori Hall
Directed by Giovanna Sardelli
Review by Rachel White
Entire contents are copyright © 2013, Rachel White. All rights reserved
Katori Hall’s The Mountaintop, opening at Actors Theatre this week, is an irreverent look at Martin Luther King’s struggle with his own martyrdom the night before his death. It is simply and imaginatively envisioned and fulfilled by two sensitive and subtle actors with intelligent direction and design by Giovanna Sardelli.
It is late at night in the Lorraine Motel April 3, 1968, the night after Martin Luther King’s famous and prophetic “I Have Been to the Mountaintop” speech. The lights come up on a plain motel with monochrome peach painted walls and matching bedspreads. The plastic venetian blinds, plain furnishings, and sparseness of the room indicate a cheap motel. The man, Martin Luther King Jr. (Larry Powell), is calling out to a friend to bring him back a pack of Pall Malls. King is sick with a cold, and his voice is gruff, maybe from speaking and maybe from the illness. Things are weighing on him.
It had never occurred to me that the Lorraine Motel was a less than savory place. I had never given the matter much thought, but the setting speaks to King’s predicament. He is an extraordinary thinker, and yet in the eyes of the establishment, he is still an ordinary black man. King staggers exhaustedly into the room, has a drink, uses the bathroom, and takes his shoes off. He then gets a call from room service and the beautiful Camae (Dominique Morrisseau) enters his life. He flirts with her, even while on the phone with his wife and daughter. Camae reassures him, “You only a man.” She gives him her cigarettes and teases him about his stinky feet. Later, when he is suffering from severe panic, she will hold him.
Hall’s dialogue is witty and rapid fire, moving from humorous to profoundly sad at a manic pace. Powell’s King is flirtatious, charming and carnal, but also big-hearted and brilliant. Powell doesn’t have King’s voice, but there are moments when he gets the right timbre and you get a hint of the real King. Camae is less educated than King, but she is aware of the situation she is in. Morriseau portrays her with a childlike frankness.
There are moments where Hall’s humor undercuts some of the more serious moments of the play, as though the author couldn’t bear to keep us suffering too long. The realistic opening is so grounded and intense that I wanted to stay there longer. Hall brings us to a more metaphysical place that in some ways is too easy a solution to the complex situation she has set up. She chooses to end on a note of triumph and theatricality, but it seems to mask some of the more frightening implications of the play: that the world’s problems are terrifying and complicated, no less so than when King was alive, and that our visionaries seem to have disappeared. I don’t know that Hall breaks new ground in regard to racial issues; she gives us the familiar trope of passing on the torch, or the baton as it were. Perhaps the bleaker question she wants to raise is this: If our heroes prove to be men and not gods, how can we face the turmoil of the world around us? Hall seems to suggest that if those visionaries are merely men, then maybe we can.
The Mountaintop
October 8-27, 2013
Actors Theatre of Louisville
316 West Main Street
Louisville, KY 40202
502-584-1205
Actorstheatre.org 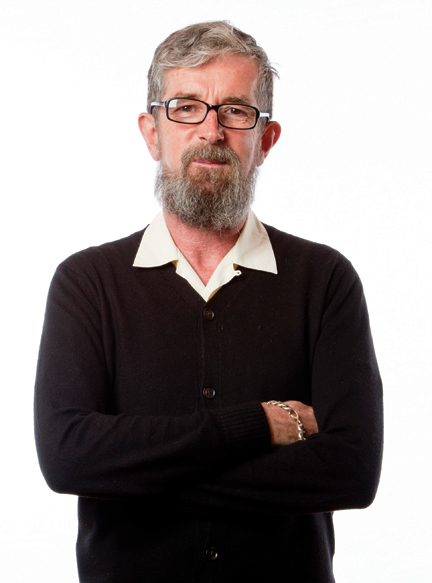