The cast of Forgive Me, It’s Christmas.
Photo-Bunbury Theatre.

Ah, the holidays. A time for families to gather and enjoy the company of friends and loved ones: “the most wonderful time of the year,” to just be happy and give your worries a rest. Or is it?

As most of us undoubtedly know, this time of year seldom goes that smoothly, and it’s a time rife with family squabbles and irritations. There’s a reason that the most popular holiday stories are the ones that revel in tales of family in crisis, and it’s in that spirit that Bunbury Theater offers up their latest original play, Forgive Me, It’s Christmas.

Since the plot involves a few twists, I won’t say too much about the storyline, but it involves a family gathering at Christmas and what may or may not be contained in their deceased patriarch’s will. Juergen Tossman’s original script blends just the right amount of humor and sentiment, with some genuine laugh-out-loud moments springing from a typically argumentative bunch of southern characters.

Performances are strong across the board. Mike Burmester is loveable as the simple minded but big hearted Loomis, who sets off the proceedings when he gives a tuxedo to a visiting Jehovah’s Witness (Jerarrin Kennerly); Brad Castleberry is exasperated perfection as his more stable brother Meryl; and Katie Graviss and Virginia Pollack are hysterical as their break-into-song cousins Billie and May.

But it’s Liz Vissing who steals the show as their loud-mouthed and opinionated sister, Dorothy. Vissing has been away from the stage for a while, and she has truly been missed. It’s great to see her return full force in a performance to be reckoned with!

Tossmann’s direction keeps the action moving without any real lulls or breaks in the pace, making full use of a great living-room set. His script creates characters that feel like real people, and avoids those awkward moments of clumsy dialog that so often plague the work of local authors. And for all the bickering that goes on, it still just may be the sweetest-natured tale he has written.

It just doesn’t feel like Christmas without a little family infighting, and Forgive Me, It’s Christmas delivers just that, without laying it on too thick. If you like your Christmas treats to have a little bite, this show may be just your thing. 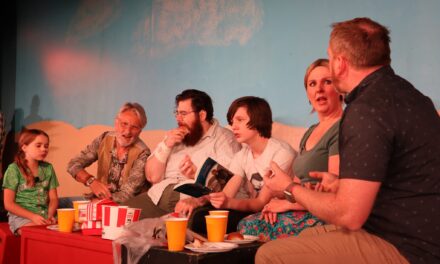 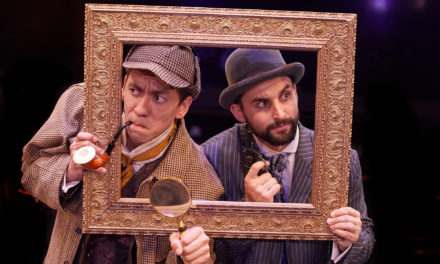