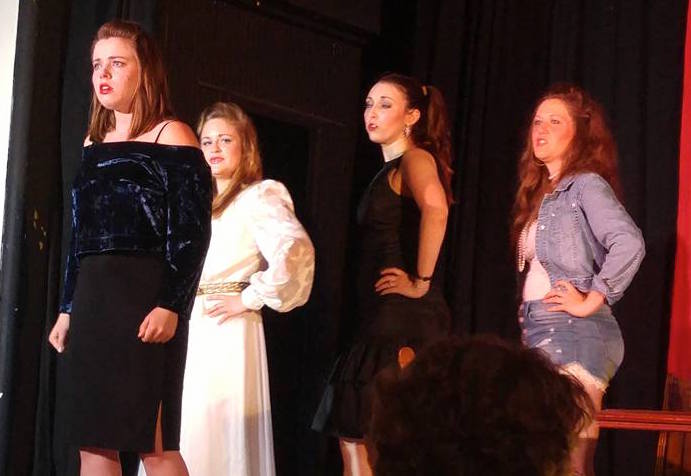 I give credit to University of Louisville alumnus Claire DiVizio for her insight and fortitude in bringing contemporary opera works to Louisville, and beyond, through her Thompson Street Opera Company. Her assemblage of talent is impressive and, for the most part, her choice of works is certainly interesting, if not unique. Such is the case for the company’s newest offering: three short works that include one from Jake Heggie.

I opened my program to find that the piece I had been looking forward to most was not on the bill: The Tell-Tale Heart, based on the story by Edgar Allen Poe. Instead, three others were presented: A Cup of Tea, At the Statue of Venus and The Final Battle for Love. Let’s start in the middle.

If you are familiar at all with contemporary opera the name Jake Heggie should ring lots of bells. He is quite renowned and has a very impressive catalogue that includes operas such as, Great Scott, and Three Decembers, for which he collaborated with talented librettist Terrance McNally, and which was most recently seen at the Kentucky Opera. Mr. Heggie and Mr. McNally have collaborated once again for At the Statue of Venus.

A simple stage featuring a bench and velvet ropes and posts gives the illusion of a museum and it is here that we meet Rose (Kelsea Webb), who is about to meet her blind date by a statue of Venus. Ms. Webb perfectly highlighted all of the thoughts, fears, elations, and joy that can come from such an encounter. The range of emotion was expressed both in her musical execution and the movement upon the stage. She begins with hope, jumps to judgment, moves to nostalgia, and ends with acceptance; whatever happens, happens. The libretto is delightful, but when she becomes nostalgic, it strangely seems to take away from the core storyline. One thing that I would caution Ms. Webb and her big voice is that she should know her space. The room was small, so fortissimo was not needed 95% of the time. David George, who can make even the most dilapidated piano in town sound like a Steinway, provided fantastic accompaniment. Delightful.

The opening piece, A Cup of Tea, to my ear, just did not belong. The lovely and talented Susan Hahn portrayed an elderly woman who sits at a table, replete with a tea service, while a pre-recorded track plays her monologue, which is often muffled and distorted in its delivery. Every once in a while Ms. Hahn would hum while the track played, miming the serving and drinking of tea. I felt that this piece would have been better suited being a 10-minute play.

After intermission we were treated to the World Premiere performance of Philip Thompson’s The Final Battle for Love, based on a short story by Tony Early. I went into this piece completely unaware of what to expect, other than it had something to do with wrestling. I was thinking maybe Greco-Roman wrestling, but nope: the modern-day WWF kind that spawned the likes of Dwayne “The Rock” Johnson, Hulk Hogan, and Lord Poetry. Oh, you don’t know Lord Poetry?

In this operatic wrestling world Lord Poetry (Samuel Soto), is the hero who will be fighting his nemesis, Bob Noxious (Nicholas Ward), for the love and affection of Darling Donnis (Maire Clement), with a little help from his friend Rockin’ Robbie Frasier (Ethan Sagin). The story is told through a Narrator (Alex Kapp), who acts like a Balladeer but also interjects the plot line with his own tale of woe concerning his love Starla (Krista Heckmann), aided by a chorus of four.

The pseudo-wrestling scenes alone were, by themselves, almost worth the price of admission. Mr. Ward absolutely encapsulates the mannerisms of Bob Noxious and delivers a fantastic and clear Tenor. Kyle King, as the announcer, Big Bill Boscoe, delivers a luscious bass line. Despite being tasked with most of the opera(etta)’s musical delivery, Mr. Kapp’s singing held up well, save for some trouble on the bottom notes. Mr. Soto and Ms. Clement provided lovely accentuation to the lovers’ story. Mr. Sagin’s delivery seemed more akin to a rock concert, which fit well with the context of his RRF persona. Unfortunately, Ms. Heckmann did not wow me in her vocal delivery or characterization. I was happy to finally hear Ms. Hahn in a greater capacity than her previous time on stage, along with the other members of the chorus (Erin Moll, Dylon Craig and Kyle King).

Conducted by Alexander Enyart, accompanied by Ethan McCollum and directed by Katie Nix, I believe that this little tale of love, with a little more spit and polish, could be even more fun.