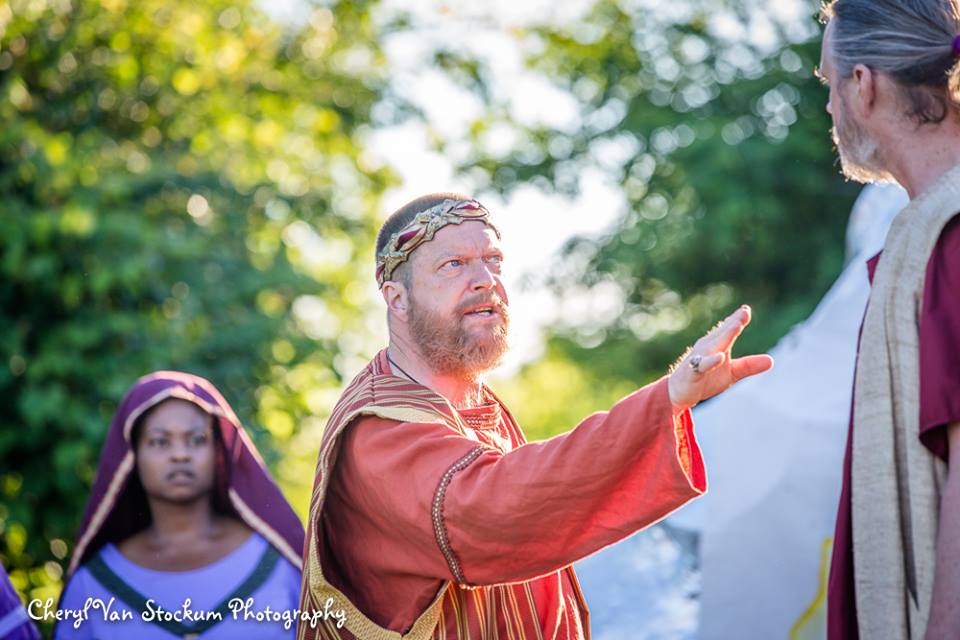 King Lear has always seemed to occupy a special place among the tragedies of William Shakespeare. While they are all somewhat preoccupied with power, Lear investigates the inevitable loss of it due to old age and infirmity: the passage of time.

For the sixth consecutive year, Kathi Ellis directs the other outdoor Shakespeare offered in this part of Kentucky. Her take on the great autumnal decline of a king is mostly very traditional in its conception, but Lear is a play that needs no fancy, post-modern context. The tale of an aged monarch and his folly in dispersing his kingdom is universal in its appeal and its insight into humanity.

Clint Gill delivers a tough, stalwart Lear, with an ego as developed as his hardened exterior. A close-cropped head replaces the leonine stereotype, but the glint in his eye is hard as steel until it is replaced by the temporary madness from heartbreak in the latter half of the play.

This Lear plays through the early scenes with clear intention in the dialogue but is anchored against truly taking off by dogged earnestness. But when we arrive at the scene where the Duke of Kent, played with idiosyncratic verve by Doug Sumey, is in conflict with Regan and Cornwall enough to be put in chains, the play truly comes to life. From that point on the production seems taken over buy a hint of its own madness. Whether this is due to shifts in the text or the energy being lifted to a higher level by Mr. Sumey might be debatable, but it is a clear turning point in this telling of the tale.

Besides Sumey, Michael Van Zant’s Edmund is a standout performance, full of arrogant disdain and a cruel humor that breaks up the otherwise stolid emotional tone. Other actors, such as Alana Ghent as Goneril, Ebony Jordan as Regan, Megan Adair as Cordelia, Karl Seitz as Albany, and Alphaeus Green, Jr. as Cornwall, Keith McGill as Gloucester, and Lee Look as The Fool, do solid work throughout, and the ensemble as a whole make sense of the language and the story in each moment, but the production depends on its fullest impact in these strategic performances. Casey Moulton’s Edgar develops into another of these key characters, but not until after he emerges from his “Poor Tom” persona and confronts his older brother, Edmund. Once there, he brings the power.

Of course, it is the nature of drama to build, to spend early scenes in exposition that establish the payoff for later. King Lear’s fulcrum is naturally the moment when he realizes he has been betrayed by his two elder daughters, and understands his tragedy of his decision to banish the one daughter who was true.

Part of the package of SummerStage is that the scenic design, besides the natural landscape of Josephine Sculpture Park, centers around an original sculpture created for the production. This year’s piece, “Later”, by Aaron Dysart, resembles a large, fallen tree that forms a rough “X”. It serves as a functional set piece, the notorious blinding scene is placed here and is as discomforting as it should be; but perhaps more importantly, it is a crucible upon which more than one character will be tested, and the truth within the play itself.

The staging is not always this impactful: ensemble members in interpretive dance moves portray the iconic storm that batters Lear in his madness. That these moves appear to be in worship of the sculpture is intriguing, but the result is underwhelming and doesn’t quite fulfill the needs of the text.

Josephine Sculpture Park has developed since the first SummerStage production six years ago, with a good quality sound system and some improved lighting, but the final scenes of Lear desperately need more light than is currently possible.Director Kathi Ellis appeared to push her cast to slightly overplay these moments in an effort to combat such difficulties, and the tactic helps; but my greatest wish for this venue is a grant that would fund some additional lighting, so that the last breaths of Mr. Gill’s well-observed performance do not take place in darkness.

Kathi Ellis has cast her King Lear in a particularly sacramental light, so that it carries a subtext of Christian symbology that is unusual and thus fresh. Despite the (arguably) shared use of language, I’m not certain how often such a connection has been made in past productions, but the concept here embraces the juxtaposition of redemption and forgiveness against horrific violence that is no small part of both Shakespeare and the Bible. 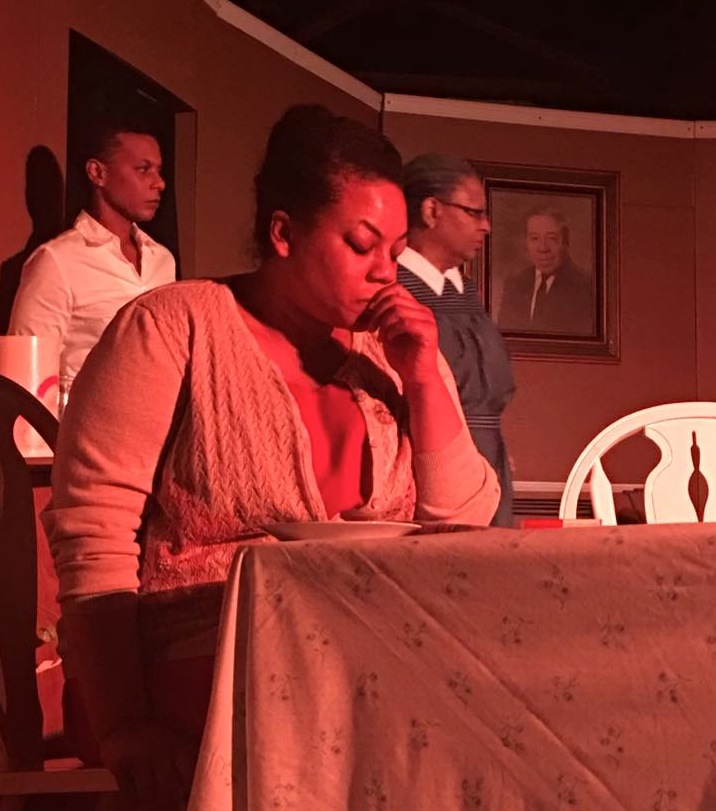