Can you spell G-O-O-D and S-H-O-W? If so, Clarksville Little Theatre’s production of The 25th Annual Putnam County Spelling Bee may be the one to see. Wonderful humor, interesting character choices, and a couple of outstanding vocal performances fuel this musical.

The show’s title pretty much explains what is going on. Contestants, including random audience members, try to win the bee. The set looks like any spelling bee you’ve ever seen: a few chairs for the contestants, a microphone up front, and a table for the judges off to the side. The only difference is a piano and musical director Cathy Ryan providing accompaniment on stage. This simplistic stage allows for the characters to utilize the space to great comedic effect. The contestants will use any method necessary to spell random words correctly while also intertwining their personal stories and issues into the play.

William Barfee (Brad Green) had the funniest strategy, using a technique known as “magic foot.” Dressed in full geek costume, Barfee (pronounced Bar-fey, as he constantly points out) moves around the stage essentially on one foot, spelling out the word with his other. Kudos to Green for keeping his balance and keeping the laughs going with his character.

Leaf Coneybear (Chrystopher Hancock) easily has the most intriguing personal story. He wasn’t initially supposed to be in the bee, but due to being second runner-up and the other two dropping out, he was in. His Superman-cape and finger puppet were a nice touch for a character that really doesn’t think he’s smart. His very funny, ballerina-like dance and singing in the appropriately titled “I’m Not That Smart” emphasize this point. When he gets multiple words right, it comes as a surprise to him. Hancock’s performance of Coneybear was a joy to watch.

All the other characters had moments where they were just laugh-out-loud funny, especially last year’s champion Chip Tolentino (Elliot Talkington), who provided both screeching and bass backing vocals somewhere in between Yoko Ono and The Clash’s Joe Strummer on the song “Pandemonium”. His reaction to his, well, involuntary response to seeing a girl while trying to spell a word was one of the most amusing moments in the show.

Singing ability and projection differed depending on the cast member, but a standout vocally was spelling bee host Rona Lisa Paretti (Dionne Burns), who turned in pleasant performances on her songs. The lone, goosebump inducing moment came from the “comfort counselor” Mitch Mahoney (Derrick Palmer). His performance on “Prayer of the Comfort Counselor”, was soulful, powerful, and easily deserved the biggest applause of the night. 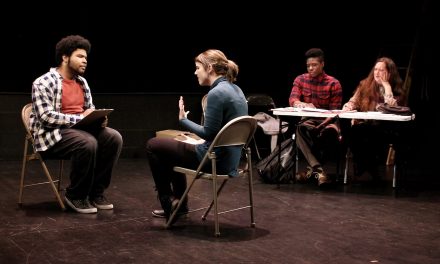