By Marilyn Campbell and Curt Columbus.
Based on the novel by Fyodor Dostoyevsky
Directed by Michael Harris

Literary adaptations are commonplace, but often-tricky business. Too much fealty to the source material can make for a dreary slog of overburdened narrative; better to find a way to cut deep into the heart of the matter with a free form re-visioning of the story.

Which makes this lean and mean version of Dostoyevsky’s classic a real treat. The doorstop of a book is famous for being one of the least often read ‘important’ novels, yet the story is marvelously dark and insightful, and has relevance to our current state of affairs.

Porfiry (Gerry Rose) is investigating two murders, and his primary person of interest is Raskolnikov (Ben Gierhart). The novel introduces Investigator Porfiry later in the narrative, but playwrights Marilyn Campbell and Curt Columbus pair the characters immediately, and make the young, ‘fallen woman’ Sonia (Kelly Moore) a more central figure. Although both Rose and Moore play other characters, it is the troika of these three, shaped into a tight, highly focused interaction that makes this script so compelling.

This Crime and Punishment plays as a psychological thriller, wound tight and released slowly, even though the ninety-minute running time (with no intermission) is so well paced as to defy expectations. It is aided by a perfectly executed sound design by Jason Weber that accentuates the action and establishes a tone of dread not unlike a horror movie. The aesthetic carries through the lighting from Ashley Beck Heimbrock.

Of course, large portions of Dostoyevsky’s novel are discarded, but the adaptation succinctly realizes the themes of justice and equality without sacrificing their power, as Raskolnikov and Porfiry debate the idea of ‘the extraordinary man’ who is not necessarily bound by society’s laws. Raskolnikov claims that such arrogant criminality drives social progress, stating that, “All great leaders of men are criminals.” The commentary speaks to the uneasy relationship with power and corruption that has never left us. It was nothing new to Dostoyevsky, and we are living now in a society that feels dominated by it.

A play this strong with only three actors cannot suffer much inadequacy in the playing, but director Michael Harris gets the most out of this trio. Kelly Moore finds Sonia’s resolute dignity, but also inventively delivers a handful of other characters, rendering each in quick, sure strokes that make indelible impressions. Gerry Rose is perfect as Investigator Porfiry, balancing quirk against the razor sharp instincts and intellect that made the character a model for literary detectives that came after.

I have been watching Ben Gierhart onstage for several years now; its one of the pleasures of a thriving theatre community to follow the work of individual artists over time, and his proficiency for comedy and skills for musical theatre have been but prelude for his complex and insightful take on Raskolnikov. He matches Rose in care and precision with the language, giving their exchanges an extra charge, and he shows the humanity of the man crushed by the aberrant psychology that leads to horrific violence, so the audience’s sympathy is never abandoned. It may be Mr. Gierhart’s best work to date.

As the typically gray Louisville January comes to an end, this story might sound a little dark and intimidating, but the talent, intelligence, and passion on display in this Crime and Punishment, should light you up. 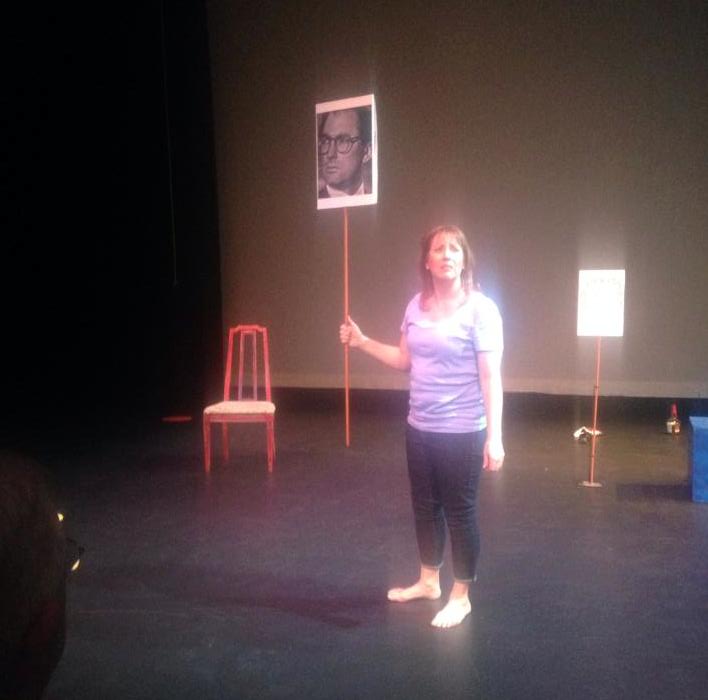