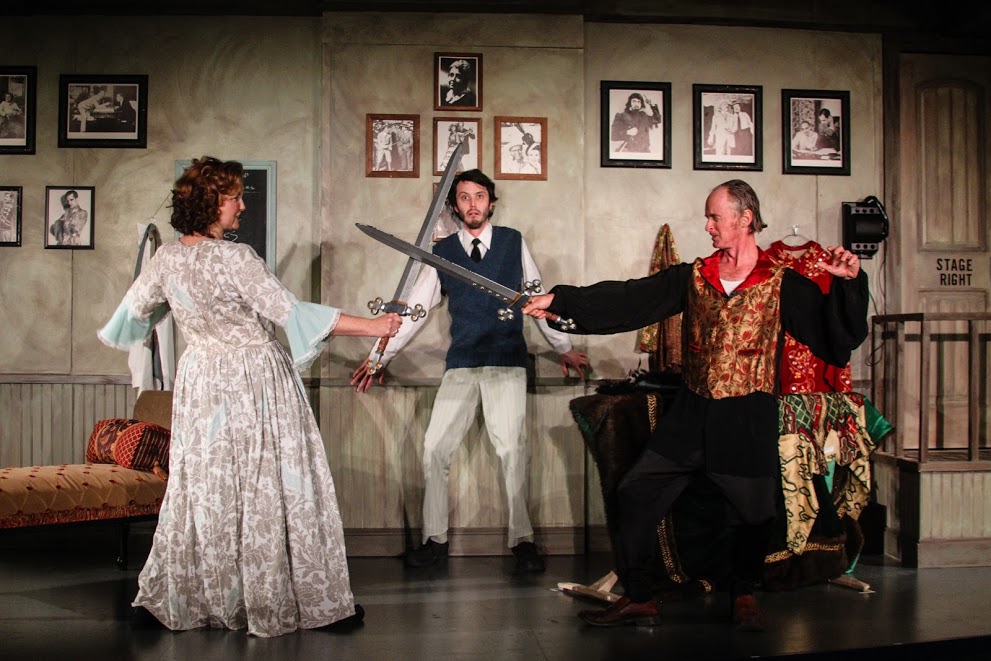 Ken Ludwig‘s Moon Over Buffalo is the kind of well-constructed, old-fashion farce that has been a mainstay of community theaters for generations, yet it was written in the early 1990’s. Set in 1953, it captures the struggle in desperation of a second-rate repertory company touring mid range towns with a reliable mix of the classics: Shakespeare and Cyrano de Bergerac, with slightly more modern comedies like Noel Coward.

George and Charlotte Hay (Mike R. Price and Michelle Lori) endeavor to keep both their company and their marriage intact while fulfilling an engagement in Buffalo, NY. Their daughter Rosalind (Macreena Groody) is visiting intending to introduce fiancé Howard (Neil Brewer), having quit the business when she became an adult. Younger company members Paul (Johnathan Jackson) and Eileen (Leslie Renee Spitznagel) complicate matters because Paul is Rosalind’s ex-boyfriend and still is in love with her, while Eileen is distraught over being pregnant with George’s child.

As broad as the text is, there is subtlety and nuance to play in the language, even if this company has not yet, at least on opening night, mined it for all is worth. A few too many jokes felt just a bit off, and the younger players were trying just a bit too hard to “sell” the material. Mr. Jackson was very fine as Rooster in Annie a few months back, but the text may let him down here, never making Paul very interesting except as another cog in the slapstick machine, and Ms. Groody makes a fetching fulcrum for the romance, but they still need to find the timing and delivery required here.

Michelle Lori and Mike R. Price bring a welcome veteran’s touch to the proceedings, transitioning between hysteria and lucidity with aplomb. Ms. Lori knows how to command a stage and force your attention on her with a star’s confidence, as befits Charlotte’s character, while Mr. Price executes various alternating sequences of pratfalls and non-sequiters in dizzying fashion. Della Brown is a bit self-conscious as Ethel (Charlotte’s mother) but she provides the appropriately tart-tongued edge when putting down her son-in-law. Leslie Renee Spitznagle is charming and professional in her thankless role, which asks little of her (more interesting is that Ms. Spitznagel is also listed as “Intimacy Choreographer”), while William Strauss is also tidy and unfussy as George’s lawyer, who is smitten with Charlotte. Of this company, I am most familiar with Neil Brewer, so I am not surprised that he too would bring sharp comedic skills to the party.

I confess I am a bit underwhelmed with Moon Over Buffalo as a script. As smart as it is in following the farce template, it is a template, and therefore offers little that will surprise or astonish. Ludwig makes a virtue of the limited setting and time frame, never allowing the plot machinations to overwhelm or confuse us, and this is the kind of material that can be a pure delight when the ensemble know exactly how to play it, to make the jokes land and the pace hum along so you aren’t given an opportunity to think too hard.

Yet I appreciate that the playwright has written something of a valentine to a by-gone age, one in which such inveterate troupers would plug away for pennies in the provinces, waiting for some golden opportunity to come along and lift their fortunes. Moon is an affectionate tribute to such journeyman theatre folk, and in, the end, nothing else matters in their lives.

Chris Bundy’s set is functional and well-detailed, with the multiple doors and levels required for the slapstick, and it has a nice, dingy, aged patina that suggests these walls were in need of a good paint job ten years ago. Vicki Hays manages costumes that, for the most part – Ms. Lori’s slacks seemed wrong for 1953, capture the period with good effect. Ms. Groody looks smashing in her 2nd act silver/white gown.

I take note of the use of an Intimacy Choreographer because this is still a rare thing to see with local groups. While Moon Over Buffalo might not seem to be very troublesome material on this point, hats off to Theatreworks of Southern Indiana and director Jason Roseberry for taking the steps necessary to help give their cast a safe and comfortable working environment. 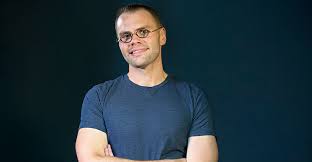 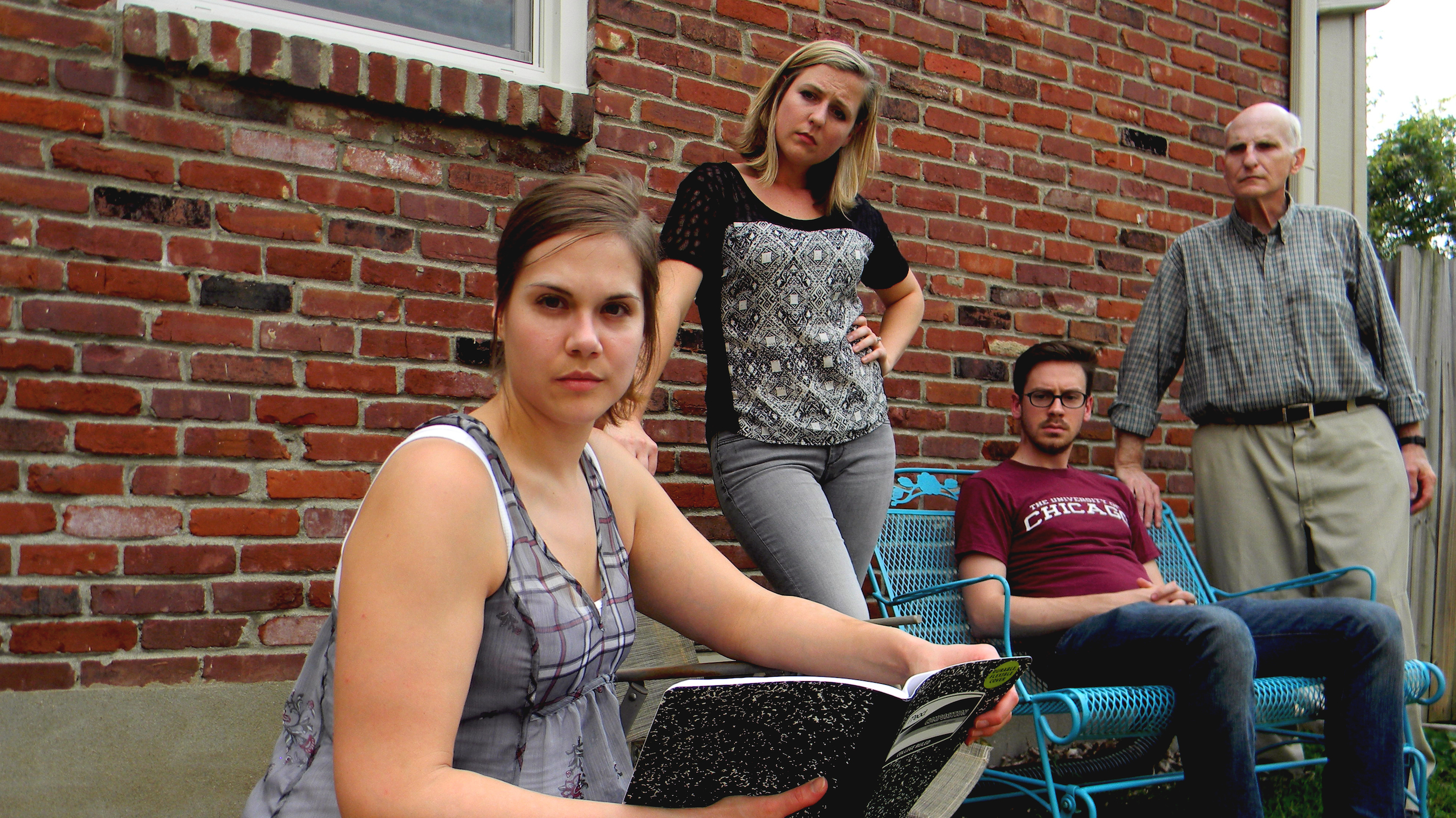 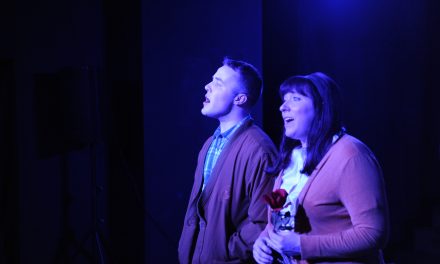 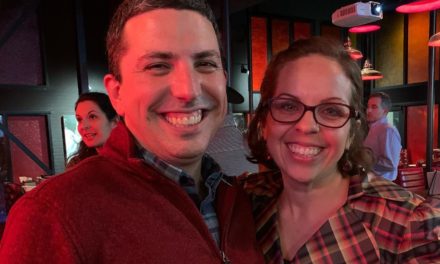