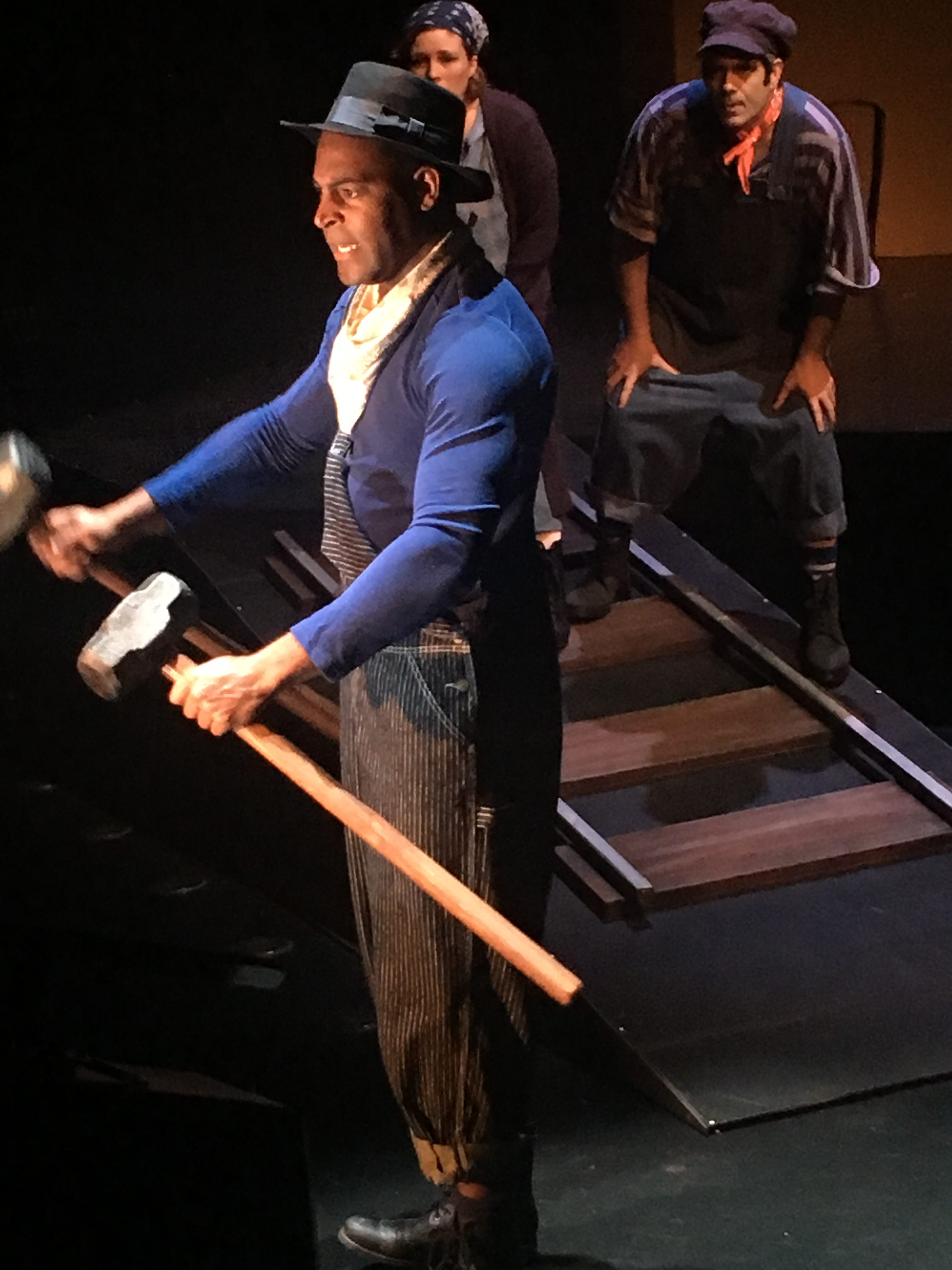 Among the many virtues of American Tales, it is happily positioned to introduce its author, Idris Goodwin, as the new Producing Artistic Director for Stage One Family Theatre. Of course, for long-time supporters of Stage One and theatre in general, Mr. Goodwin may not require an introduction. His play And In This Corner, Cassius Clay, about the formative years of Louisville’s most famous native son, Muhammad Ali, premiered with this company a few seasons ago.

American Tales is more “typical” Stage One fare, in that it presents American folktales in a colorful fashion that targets a young audience, yet, and this is also typical for them, it does so by never taking that audience for granted, or speaking down to them. Adults without kids are missing out when they take a pass on Stage One shows, which are cast with professional actors of high quality. And if you consider yourself too mature to enjoy these stories, you are almost certainly taking yourself too seriously.

Mr. Goodwin frames the telling of these tales in the context of a substitute art teacher, Esperanza (Alisha Espinosa), being mistakenly assigned a history class. Lost at sea, she launches into the story of Pecos Bill (Ben Evans) and Slue Foot Sue (Katie Martin) desperately trying to wrangle a tornado on their wedding day. The outrageous, cartoonish, western costumes are a hoot, and the narrative is conveyed with great energy and humor that runs the gamut from sly to slapstick.

Next comes the tale of Br’er Rabbit (DeAira Hermani) tricked by his nemesis, Br’er Fox (Ben Evans) into a snare. The costumes again are highlighted, with each of the animal characters enacted by actors clad in dark colors and puppet figures attached to their torsos and hands, and nicely realized headpieces that allow the actors to be heard clearly. The performances are good, but Costume Designer Evan Prizant’s work here is so fun and creative; a rare instance in which costumes can work as an important onstage presence that need not be subservient to performance.

Finally, we witness the tale of John Henry (Robert Thompson) and his hammer in competition with a steam-powered hammer to break through a rocky passage for the laying of the railroad track. Perhaps Mr. Prizant’s greatest achievement for American Tales is the singular costume piece created for the three actors, listed as Creative Spirits in the program, (Steffan Clark, Michael Hommerich, Gracie Taylor) which bring the steam-powered hammer to life. It is the epitome of theatrical ingenuity and the perfect metaphor for the human versus machine theme of John Henry.

The cast was uniformly excellent and worked together as an ensemble, each tasked with multiple roles assigned with equanimity. Ben Evans stood out as Pecos Bill and Br’er Fox. Stalwart as the former and evil as the latter, complete with a deliciously mischievous giggle. Katie Martin’s Slue Foot Sue was so delightfully funny; it made me wish someone would mount a production of Annie Get Your Gun in the immediate future. DeAira Hermani was a terrific Br’er Rabbit; charming and clever as required, while Robert Thompson brought the requisite dignity and suggestion of almost inhuman physical power that is the defining characteristic of John Henry.

As winning as were Ms. Hermani and Mr. Thompson, they could have projected a little more. There were moments their dialogue almost got lost in the Bomhard Theatre. Alisha Espinoza came across on this score very well, except when she began a song to close out the show. The rest of the company could be heard very well, including Megan Adair as Esperanza’s friend, Julia, who is relegated to a position away from the action for that role but finds her way into the center of things, particularly in the John Henry segment.

Mr. Goodwin’s script is filled with contemporary cultural references, some of which might fly past the kids in attendance. One mention of Morgan Freeman elicited this humorous outburst from a nearby young one: “…whoever THAT is!” But it illustrates how he pitches his play to a broader audience and won’t patronize to any demographic.

He also is visiting two stories that touch upon the complicated history of representation of People of Color in American History. The Br’er Rabbit stories have been accused of being racist, particularly in their association with the Uncle Remus character, most famously in the Walt Disney film The Song of the South. Goodwin reclaims them here with some success, although when Br’er Fox sets his most insidious trap, he creates as a lure a mock rabbit made from roof tar so sticky that Br’er Rabbit will be unable to escape. When, in describing his creation, he uttered the words “tar baby”, it seemed to make the adults in the audience stiffen for a moment. The label makes sense within the narrative, but its once common usage as a racial epithet is not forgotten.

There is also balance in including John Henry, one of the few folk tales that celebrate the pride, strength, and integrity of a black man in America before the civil rights movement. Goodwin leans into those qualities, leaving out any mention of a wife in favor of a populist, pro-labor speech about the value of human accomplishment that places John Henry in the position of being the first union leader in the United States.

By framing the stories in a classroom setting, Goodwin also makes important points about education and the resourcefulness and imagination that is the daily currency of most teachers. That Esperanza tackles the subject of history through the use of folk tales begs the question of whether folktales may express something about the American identity missing from history books. The understanding we have in 2018 about how deeply history curriculum has been narrowly shaped to exclude the vital contributions of African Americans, Hispanic Americans, Asian Americans, etc. – a recent textbook purportedly offered this summary of the displacement of Native Americans in the 19th century: “The First Nations people’s agreed to move to different areas to make room for the new settlements.” makes this an important issue, and Mr. Goodwin seems to recognize this when he has Esperanza begin her presentation to the class by saying, “History belongs to us all” before pointedly having her turn to folk tales instead of a textbook.

Which leaves a play written and produced for an audience of children that also makes cogent and provocative social commentary for adults. American Tales gives us the best of what Stage One has been under the stewardship of outgoing Producing Artistic Director Peter Holloway (retiring after 17 seasons) with the promise of even more socially relevant family theatre under Idris Goodwin, making it so much more than just a marvelous entertainment.

For more information and to purchase tickets, click here:https://stageone.org/season/american-tales/