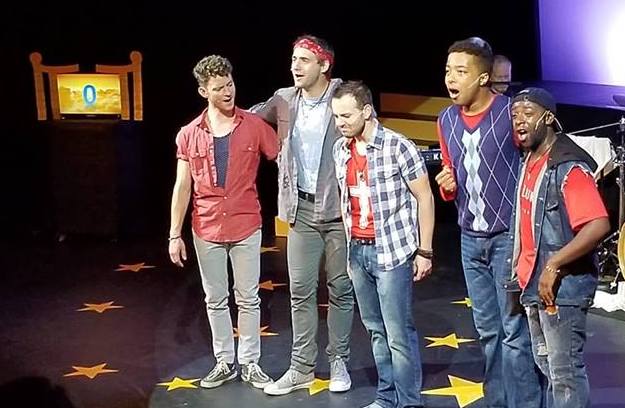 Altar Boyz is one of the craziest, funniest things I have seen lately. A tongue-in-cheek satire not of God or organized religion per se, but of a particular type of hyperactive, relentlessly upbeat Christian entertainment that is pure, irresistible showbiz. The title is the name of a fictitious Christian boy-band on the last night of their national ‘Raise the Praise’ tour: Matthew (Cameron Conners), Mark (Michael Detmer), Luke (Tony Smith), Juan (Remy Sisk), and Abraham (Alfie Jones), who’s Jewish and sports a yarmulke adorned with a glitzy star.

The show is straight up cabaret with scenes interpolated between a dozen production numbers that proselytize while also filling in the background of the individual members and how they came together. One of the details I found especially satisfying was how the first four were stuck in their songwriting efforts until the arrival of Abraham, who has a gift for crafting lyrics that is an unmistakable nod to the long tradition of great Jewish songwriters in America.

For the first number or so, one could almost buy into the sincerity of the musical soul saving, but then the “Soul Sensor” is brought on to the stage; a digital device that displays the number of sinners in the audience who require saving. Another nice detail was how the design of the device echoed the Ark of the Covenant from Raiders of the Lost Ark.

No particular point is made about the sexual orientation of the individual Boyz, but the show is filled with innuendo and suggestiveness, and the inherent dishonesty and inability to confront the truth of the human condition of so many denominations is brought into relief throughout the evening.

The score is pretty good, and there is just enough variety in the music to keep the dance tempo from overwhelming the audience. Solo numbers given to each Boy are the strongest moments in the show, from Abraham’s “Everybody Fits”, to Luke’s James Brown-like rendition of “Body, Mind, and Soul”. Matthew hilariously sings about romantic/sexual attraction and the Christian demand for abstinence to a randomly selected woman pulled from the audience in “Something About You”, and Juan’s story comes out in “La Vida Eternal”. Mark’s “Epiphany” features the strongest vocal performance of the evening from Michael Detmer.

The show moves fast and loose thanks to Alfie Jones’ choreography, which is suitably cheesy and post-disco but shot through with several moments of expression of character. Mr. Jones is an engaging performer as Abraham, but we must be grateful that director Michael Drury imposed on him the double duty of creating the disco-cum-Vegas-style dance moves.

Pandora likes to stage campy cabaret shows, and, in fact, their next show is Kander & Ebb’s Cabaret, but Altar Boyz, as enjoyable as it is, is very smart and caustic in its satirical intention, even while it allows the five characters a measure of humanity beyond the available clichés.

The cast and the band rock it with enough abandon to draw you in against any potential objection, although I spied two people midway through the performance I attended. I have no idea why, but the marketing of a Christian boy-band concert might not look all that different than the marketing for this production, so I suppose someone could actually come with no idea of what the show is really about or Pandora’s profile as a company specializing in LGBTQ themes – I know that is hard to believe, yet everyone ought to be able to have fun with Altar Boyz without feeling so challenged as to be offended. 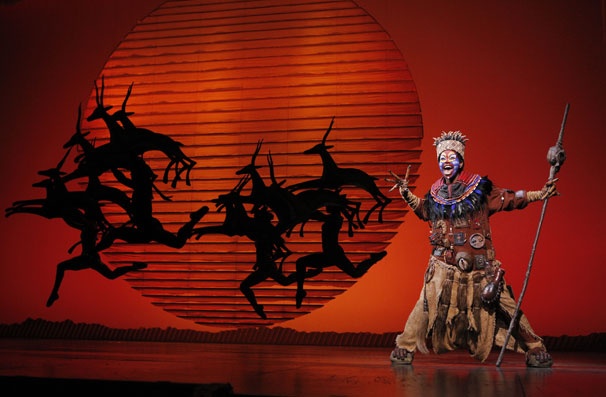