Edward Albee has a spurious reputation for writing difficult, inaccessible plays. While the esteemed playwright is usually challenging to mainstream audiences, The Goat Or, Who is Sylvia? functions surprisingly well as domestic farce. It is often flat out funny.

But the marital strife between Martin (Tony Prince) and his wife Stevie (Susan Linville) is infidelity of a most uncommon sort; Martin has fallen in love with a goat named Sylvia.

Much of the consternation between Martin, Stevie, and their gay teenage son Billy (Matt Street) is built on the framework of convention, parroting the dynamic of the hundreds of other stories of domestic betrayal we have encountered; the angry and resentful spouse and the defensiveness of the progeny are not unfamiliar, but the introduction of bestiality is not only less shocking than expected but is lent more tenderness than one would have thought possible.

Clearly, Albee is having fun throwing our moral barometer off-balance so that we might question our assumptions about what is “right”. Martin’s transgression is universally condemned, but it seems remarkably easy to emphasize with him and see his best friend Ross (Joey Arena) as the bad guy for outing him to his wife.

That off-kilter quality is nicely realized by the performances, particularly in the work of Susan Linville, a Louisville theatre veteran too long away from the stage. In her hands, Stevie is a precarious balance of the predictable anger and outrage of the betrayed spouse and the utter disbelief that the “other woman” is anything but. Linville beautifully realizes the self-conscious absurdist edge of the material.

If Martin seems awkward and uncertain in the early scenes, it makes perfect sense; once he is able to confess his secret to Ross, and Tony Prince explores the strange emotional landscape of the character’s singular journey with passion and intelligence. Matt Street does a good job navigating Billy’s quixotic emotional roller-coaster, and the middle scenes are powerful explorations of the father-son dynamic, although the notes of reconciliation may occur a little too rapidly.

But Albee’s associations are complex, not the least of which is the comparison between Martin and Billy’s “aberrant” predilections. Perhaps Billy begins to overcome his revulsion about Sylvia because he understands the feeling of alienation and otherness that has overwhelmed his father. There is a long history of homosexuality being compared to bestiality, as recently as the public discourse about marriage equality.

Charles A. Nasby’s set echoes the multiple layers of meaning and context, and the lighting by Keith Kimmel and sound by Richard McGrew nicely flesh out the design work.

Director Neil Brewer seems to have staged for the comedy and mostly let the subtext resonate. Which is not to say that the actors don’t play the language with appropriate intention: Tony Prince wields the word “Judas” with exactly the right open beat following hard upon, but there is a crucial lack of portentousness. However provocative it may be, this is also an entertaining play. The Goat is as accessible as it needs to be. 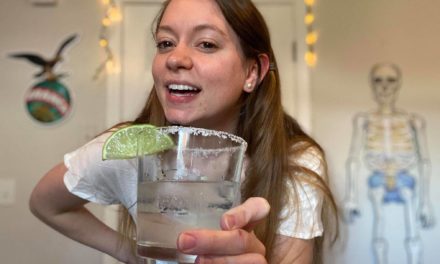