Now comes the third chapter in director Amy Attaway’s “Game of Kings” series, which began with Richard II in 2017, followed by Henry IV, Part One a year ago, and will finish with Henry V in the summer of 2020.

Its marketing strategy, pure and simple, a rebranding of Shakespeare’s “Henriad”, complete with a centerpiece throne made of wood, not iron. Game of Thrones trades with relish on the real and bloody history of English Kings and Queens, but his is the original popular serial of such stories.

Although Shakespeare never wrote about a King unchallenged, Part Two is surprisingly lacking in both the highly developed political intrigue and the time spent developing the relationship between Hal and Falstaff, preferring to easily resolve the scheming of Northumberland (Jon Huffman) and the Archbishop of York (Jon O’Brien) and indulge more in the comedy of Falstaff’s comrades. Hal has little to do before intermission, and this is really Falstaff’s play.

Eventually, the more weighty matters of death, betrayal, and succession give Hal a greater role to play, one that demands a hard line that might seem necessary, if cruel. This Henry ends with one of the most emotionally complex moments in any of Shakespeare’s Histories, one that throws into relief the ambiguity that makes Hal and Falstaff such a riveting story. If Henry IV, Part Two at times feels like a half-hearted sequel, it provides both a satisfying end to this crucial relationship and ample evidence that Shakespeare’s writing remains as modern as anything being written today.

We are exposed to so many productions of the Bard that are muddled by misbegotten concepts and over emotional acting, that always feels refreshing to witness a performance led more by the text. Even when transposed to other periods and other settings, the writing almost always provides all that is necessary.

Most of the cast reprise their roles from Part One, and J. Barrett Cooper’s Falstaff is even more relaxed and lived in. It makes perfect sense when an actor has had a year to ruminate on a character between productions, but Cooper finds his way into the tragic folly of the character with great care and nuance. We may always be tempted to remember Falstaff as a broadly comic figure, but the role is approached with relish because of the rich and layered dimension of the character.

Zachary Burrell is given less time on stage as Hal, but his scenes are where the gravitas of the story is realized, a young, profligate prince finally coming to grips with his position in the world. Burrell realizes the authority of being Henry V even before he dons the trappings of monarchy.

Hallie Dizadervic is an energetic and combative Doll, fiercely engaging in knockabout fisticuffs with Kyle Ware’s Pistol, and Jennifer Pennington is so good as Hostess Quickly she makes you wish Shakespeare would have taken the time to write a play about her. I also enjoyed Gregory Maupin’s Lord Chief Justice, a study in the balance of logic and political expediency in the name of upholding the law, Neill Robertson’s just shy of scene-stealing work as the drunken Bardolph, Monte Priddy’s eccentric Shallow, and young Gregory Sanders hold his own playing with the big boys as Falstaff’s page.

Shall I tediously recount the good work of all of the individuals in this excellent ensemble? Besides the aforementioned players, it also includes Jon Becraft, Abigail Bailey Maupin, Will DeVary, Braden McCampbell, Dathan Hooper, Amber Avant, and Angelica Santiago. Nobody takes a wrong step, and they all have moments with which to shine, but Kentucky Shakespeare is a true repertory company during the summer, so that bit players here are given greater embrace in the other two productions. Look to As You Like It when it returns in July, and King Lear when it arrives on June 27 as opportunities to show some of these players to greater advantage.

Director Amy Attaway gives the play’s finer moments room to breathe while lending the lesser passages enough wit and quick energy to not distract. If in one a moment or two the two aspects unfortunately overlap; the final scene between King Henry and the Prince of Wales would seem to call for a quieter, less melodramatic approach than it is given here, for the most part, she navigates this tricky material successfully.

Is it also tedious to once again recognize the estimable design work that has become so expected as to risk being taken for granted? Donna Lawrence Downs (costumes), Casey Clark (lights), Laura Ellis (sound) are their usual excellent selves here, and Scott Carney continues to offer an edgy, modern score that is used judiciously. Scenic Designer Karl Anderson is new to this team, and for Henry, he has matched the work from the previous productions in Attaway’s take on the Henriad so that the look is seamless. 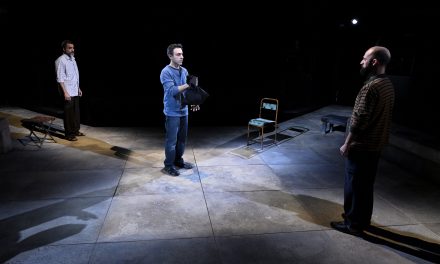