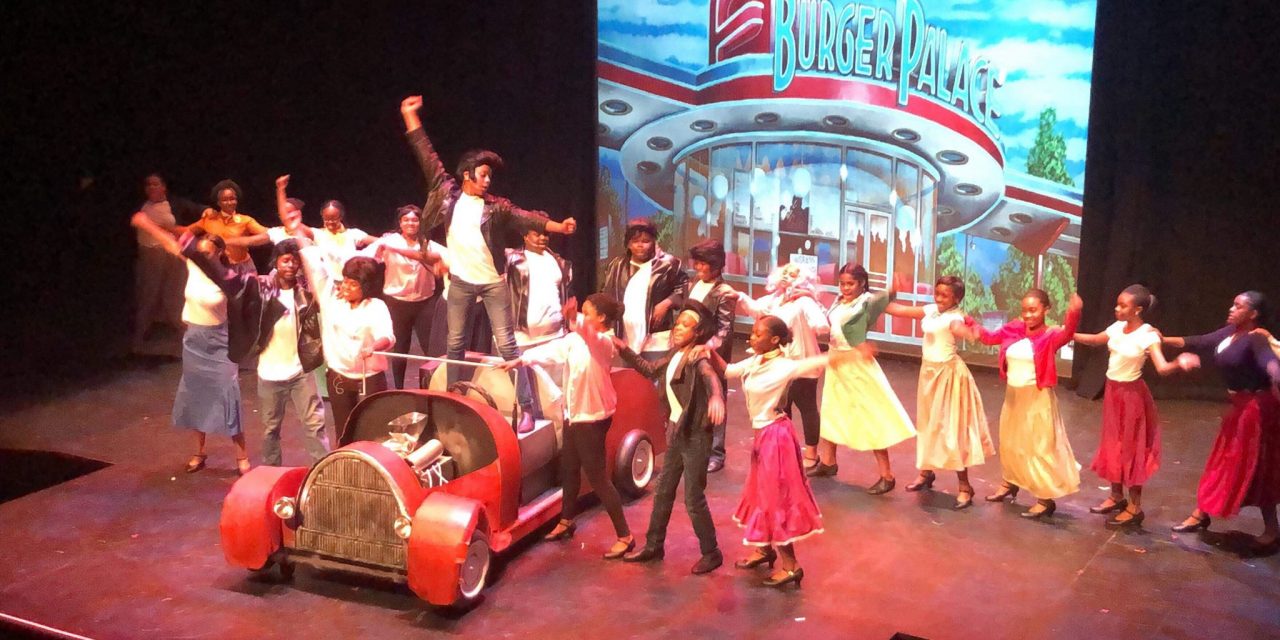 The Best of Annie Jr. and Grease

Watch out Broadway, there is a storm of talent brewing in Louisville, KY. I think it is quite possible that theatergoers of the future may very well be treated to the parade of talent that I, along with others, got to witness over the weekend with Louisville Central Community Center’s Theater Troupes.

Let’s begin with Tiny Tyke Theater Troupe’s presentation of Annie Jr. I admit that I have never seen a junior version of Annie and by all accounts, there aren’t many differences save for a song switch here and there and the abbreviated run time. We all know the story of the Red-Headed Orphan who got her start in print as a comic, then moved on to radio serials (fondly referenced in the holiday favorite A Christmas Story), then movies and then the Great White Way. Annie is a symbol of perseverance, determination, and eternal optimism. While she lived a “Hard Knock Life”, she always remained hopeful. It is that resiliency that makes Annie a welcome production and reminder of how we all should be.

The cast is rather large and I wish that I could give personal huzzahs to each and every character, but I’ll have to focus on a handful. Kyah Young’s scared and timid Molly was good as was Nadia Wright’s bully, Pepper. The other orphans were delightful as well and it looked as though everyone was enjoying themselves. Even when there were microphone issues, they soldiered on like professionals.

Zoe Wolf and Kayden Ancrum as Lily St. Regis and Rooster Hannigan were a fun duo to watch and I loved the suave and greasy nature of your characters. Equally greasy and enjoyable was Chastity Cardell’s Ms. Hannigan. A lovely voice and she had the exhaustion of “Little Girls” down pat.

Jeremiah Stephens’ Mr. Warbucks was pretty even-keeled and offered a pleasant surprise. Sir, you’ve got a nice voice. Your delivery was poised and pointed.

While Jasmine Johnson’s Ms. Farrell seemed a little uneven in singing and delivery, she never lost determination or focus. The same can be said for Nariah Grubs-Moore’s Annie. Ms. Grubs-Moore certainly knew her songs and often times had the nuances just right, but like many of us who in the industry have experienced, lines are sometimes forgotten. Luckily this troupe have been rehearsing together for seven weeks and had clearly developed a supportive camaraderie.

Speaking of show-offs there was one actor who I want to see as a real radio/TV host when he gets older and that is D’Corey Johnson, who played Bert Healy. It didn’t matter that he seemed to not understand half of what his character was saying during his time on stage because his exuberance more than made up for it.

Let’s move on to the Youth Repertory Theater Troupe’s presentation of Grease. This was fun, too.

Rydell High in the 1950s, home of the Thunderbirds and Pink Ladies, when men wore their hair in a pompadour and ladies strutted around in skirts, smoking cigarettes. High School Seniors trying to figure out daily life and love while also thinking about their futures. While the show may be set over 50 years in the past, the nature of adolescence hasn’t changed much, and I am sure that this troupe can easily identify with those feelings and movements as not far from their own experience.

They certainly know how to develop their individual characters and I applaud the directors and producers at Louisville Central Community Center for casting this group of actors against what is the typical norm of the show.

Tre Gaines’ Kenickie showed great flow, especially when he showed off his “Greased Lightning”. Briana Barker’s Cha Cha DeGregorio was every bit of the conniver that she’s supposed to be. The supporting T-birds were each great in their individual ways and I appreciated that they were even more essential than I’ve seen in other productions, not to mention they have got some crazy-mad dancing skills. Brooke Sturgeon as Vanessa Fontaine did well, as did Andreas Woods as Patty. The note that I would give both of these ladies is that enunciation is important, as there were times that your delivery was jumbled.

The Pink Ladies served as a perfect supporting cast without seeming like a supporting cast. Each actress obviously worked on her individual character development and it showed. Eva McGhee’s Frenchie was at her best when she performed with Darien Wright’s Teen Angel. Shylin Jordan’s Rizzo was tough on the outside but knew how to draw strength when she needed it.

As for the lovers of the story, Mariah Martin as Sandy and Christian Edwards as Danny, the pair seemed to have pretty good chemistry. Vocally they both have nice balances and sing well and it is always a good sign when you can smile at each other while singing and/or delivering lines.

The whole of the troupe did very well in solos and in chorus. The songs were paced well and while there were some moments where the pitch was an issue, a simple modulation corrected it all. Nice work from the onstage band under the direction of Tamia Yates (unfortunately I do not have their names).

Carly Franklin absolutely nailed the choreography for both of the shows. Using moves similar to Broadway standards, she amped it up by incorporating gymnastics and other surprises. You could tell the kids were getting into it all.

Gerry Kean’s sets were clean and multi-functional and I loved the headlights and real car feel of “Greased Lightning”. Mr. Kean and Yero Pryor’s lighting was good as well.

While the costuming was all rather perfect for each production, save for the lack of a coat for Ms. Farrell during “NYC”, I have to address the choice of make-up. Overall the make-up used for Grease was good and did well to put the face forward but I cannot say the same for Annie Jr.

I found it rather implausible that a group of orphans would have access to glittery blue eye shadow, rouge, and bright, red lipstick. The look made the young ladies seem not so young and certainly seemed inappropriate for poor, downtrodden children.

Despite the make-up hiccup I enthusiastically applaud Ms. Bledsaw and Ms. Hood and all of the actors and production team for all of the work that they have put into these productions. The love shows on the stage and is given back by the audience.

The Best of Annie Jr. & Grease 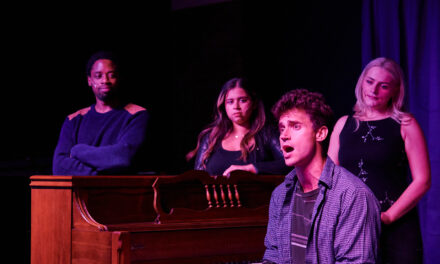 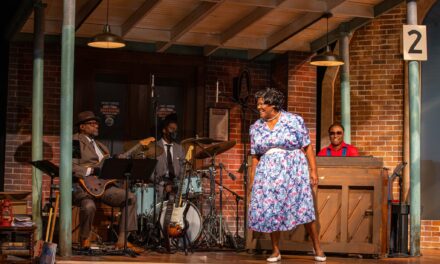