If you imagine a new production of the classic musical Hair will be a cozy, nostalgic revel in hippie culture you are partly right. But Hair was created as a bold and provocative statement of the counter culture to the establishment, and director Frank Goodloe’s take on the material is faithful to both the stylistic and intellectual aesthetic that lies at the heart of the show.

While the music has stood the test of time, some of the dialogue comes off as a parody of hippie vernacular to such a degree that one must wonder if that was the original intention in 1968. Then, the subtitle of the original production was The American Tribal Love-Rock Musical.

Although there are a handful of characters that emerge, most particularly the caustic and sardonic Berger (Josh O’Brien) and the beatifically innocent Claude (Jake Minton), Goodloe’s staging and the choreography by Molly Kays emphasize the tribal aspect of the concept, stuffing the stage with bodies that for the most part flow and speak to each other organically. There are a few more self-conscious theatrical gestures, such as the cast adopting the posture and rhythm of passengers on a subway during “Initials” – a sign of invention in any other material that seemed a little too cute for a show with a more primitive foundation.

But the strength of the show is in the physical expression of that ensemble, both in the movement and in the singing. There were several strong leads or solo vocals; it is no surprise that Tymika Prince is stunning in the iconic opening, “Aquarius”, and “Walking in Space”, and Lauren McCombs equally so with “Easy to be Hard”, and there is one glorious moment when they have a duet in the extended climax that by itself is reason enough to see this show.

Derrick Palmer was a memorable presence as Hud, especially forceful in the early numbers such as “Colored Spade” and “Ain’t Got No”, while Madi Shipman beautifully placed “Frank Mills” in exactly the plaintive air of infatuation required. Tony Vincent emerged from the Tribe to momentarily steal the show as Margaret Mead encountering hippies for the first time.

Members of the Tribe all managed to be distinctly individual while working beautifully as a unit, and some, like Helen Magnolia Hensley and Elizabeth Scheen, moved with such joyful, unfettered, abandon.

The energy and pace fell off a little in act two, and the band sounded fatigued, partly because the show fumbles in the structure a bit, which underlines the book as the weakness of Hair, but also this must be an exhausting show to perform. It is a propulsive run of songs in the first act, with nary a moment’s rest, and the clunky exposition that arrives after intermission challenges the powerful impact of the music.

In the final scenes, Hair delivers a morbid sense of fatalism and tragedy that belies the generally joyous celebration of life within the Tribe. The actors and the lighting (by Nick Dent) reach out to embrace the audience. It is the core of Hair’s importance as a message of social protest, and it confronts the audience with the reality that very few of us are willing to put ourselves at risk with real action.

In one incisive relationship of songs, “Three – Five – Zero – Zero” graphically chronicles the horrific violence visited upon the human body in war when suddenly Daniel Smith and Lili Javorka sing “What a Piece of Work Is Man”, which lifts from William Shakespeare the most poetic expression of humanity’s grace, underscoring the profound loss and sacrifice. The juxtaposition is the most essential moment in the show.

By focusing on the deliberate separation of youth culture from the mainstream, Hair examines our common humanity, the threads that connect us in spite of our differences. For all of the cosmic stoner attitude, acid trips, and chants of Hare Krishna, that is all of us in that Tribe onstage.

Celebrating Advocacy: Then and Now a FREE talkback discussion follows the Feb. 9 performance of Hair. Speakers Jessica Loving and Doug Magee will discuss their work, including the ACLU and Legal Aid Society, from the 1960/70s to the current day. Q&A from speakers with audience and Hair cast; Complimentary snacks and desserts. 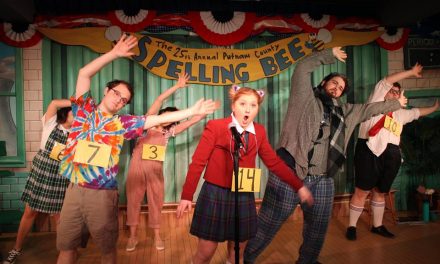