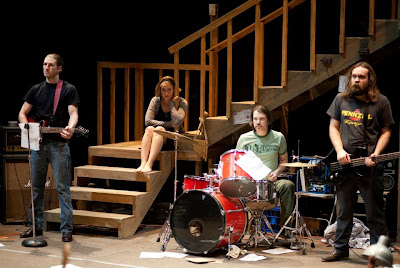 By Marco Ramirez, Directed by Amy Attaway
Reviewed by Keith Waits
Entire contents copyright 2011 Keith Waits. All rights reserved.
Tonight I experienced a rare instance of transcendence in a theatre. In its final moments, Broadsword: a heavy metal play elicited in me a profound visceral reaction that caught me off guard. A feeling of genuine apprehension that made my heart skip a beat and my breathe stop for an instant. To describe the scene would certainly be a spoiler, and even the details of the stagecraft employed might seem unremarkable in print, but the mysterious alchemy of ingredients worked their magic and resulted in a thrilling climax. I have no idea if anyone else in the audience felt quite the same way, but it was a memorable moment for me.
The story of Broadsword concerns itself with such ephemeral experience as it explores the past history of three members of a heavy metal quartet who have come to mourn the loss of one of its members, Richie. Sixteen years after they brushed up against success and artistic achievement, they find themselves confronting a mystery surrounding Richie’s years of seclusion in his mother’s basement and his disappearance six months earlier. The basement was their former rehearsal hall and is filled with instruments, amplifiers and what appears to be years of detritus resulting from, what we learn, was a dark and dangerous obsession. The work of Scenic Designer Karl Anderson and Properties Designer Heather Lindert is exemplary, and the scene only lacks the dank, funky smells that would almost certainly accompany such a location.
Much of the play consists of the band members working out the complex emotional baggage gathered over the years and never exorcised. The strong cast makes the most of these exchanges, and these scenes ground the action sufficiently so that the introduction of a supernatural element seems surprisingly organic and doesn’t throw the tone of the material out of balance. That element is worthy of The Twilight Zone and conjures thoughts of Robert Johnson at the crossroad overlaid on the image of Brian Wilson locked away in pursuit of perfection.
It is a marvelous idea – one potent enough for me to wish the playwright would revisit the text to develop it just a little further than it currently allows. Or perhaps this particular production doesn’t reach its fullest potential. In either event, as good as it is, Broadsword just falls short of greatness.
That still leaves us with a smart script characterized by colorful dialogue and a sure eye for the detail of the relationships. Scott Anthony plays Nicky, the group’s drummer and bitter misanthrope, and has the luck of the lines. Almost everything he says is funny and biting, and Mr. Anthony displays a sure understanding if what makes him tick. His work is filled with swagger and cocksureness. Michael Mayes is his equal as Tony, Richie’s brother and the lead singer whose attempt at a solo career triggered the band’s demise. The character is a well-observed mix of the conceited gloss of the front man and the working-class roots of a kid from Rahway. Brandon Cox nicely captures the affability of the member who perhaps has less conflict with any other member and who seems the most regretful that things never worked out.
Another character, Dr. Thorne, introduces both a greater depth to the mystery and some measure of explanation. He is played in suitably enigmatic fashion by Tom Luce. Another otherworldly figure is the Man in White, intended to represent the easy temptations of becoming a rock star, and perhaps much more. Robert McFarland has the requisite languid and seductive presence, but this usually reliable actor’s energy seemed a little off opening night.
Another character, Becca, was once Broadsword’s Chief Groupie but is now as weary and disappointed as the rest. In truth, the character seems underdeveloped and a little cliché in the writing, yet Cara Hicks’ fully realized portrayal almost makes you not notice. It is a good example of an actor pushing the character beyond the text, and Ms. Hicks communicates so much through her physicality and body language. Just before that magical climax, she has a delightful moment where she casts off her weary burdens and becomes again, for an instant, that young acolyte hanging on every power chord, and she manages it entirely without words, a pure and unfettered expression of childish delight.
As a theatregoer, I live for such moments, for they transcend the particular details of lights, props, whether the seats are comfortable or how noisily another patron is unwrapping a cough drop, and insert us fully into the lives of the characters and the action of the play. It is the magic of live theatre, and its potential exists every time a dedicated group of theatre artists place themselves on a stage and invite you along for the ride. Whatever its faults, Broadsword, a heavy metal play does this forcefully, giving its audience a vivid and memorable experience.
Broadsword, a heavy metal play
November 11, 12, 14, 18, 19 @ 8pm.
Theatre [502]
Parkside Studio inside The Iroquois Amphitheater
1080 Amphitheater Road
Louisville, KY
502-509-1595
www.theatre502.org