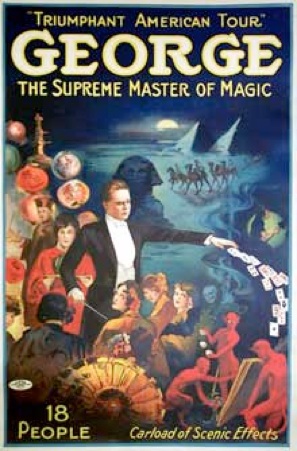 The arrival of number two in this series of short plays highlights an important difference in this experience compared to The Stranger and Ludlow Quinn. Each entry must more or less stand on its own, whereas the serial format of Stranger kept the ball in the air with delirious anticipation of each new chapter.

Diana Grisanti packs George and the Triumphant American Tour with thematic weight worth more than the 15 minutes it takes to play out. The story actually moves off of the titular magician Grover George (Robert McFarland) and focuses on his daughter Mildred (Caitlin Willenbrink) and how, during George’s 1940’s tour of Cuba, she becomes embroiled in revolutionary politics after befriending Benita (Gabriella Castillo). The production takes on something of the tone of an academic lecture as Eli Keel narrates the scenario from a rostrum and punctuates the action with dangerous flourishes of a long wooden pointer. Several portraits of Cuban revolutionaries from this period are projected, notably Fulgencio Batista, who would eventually become the dictator overthrown by a more famous Cuban uprising 15 years later.

It is not as ponderous as all that, with wit enough and pace that easily kept the audience engaged for such a brief spell. I personally would have welcomed a few extra minutes to absorb the story and characters more fully, and the play feels like a first pass on a subject that could expand to at least a full one act. Ms. Grisanti, give me more please.

Mr. Keel’s fierce comic energy dominated the proceedings, but Caitlin Willenbrink and Gabriella Castillo were adept at playing in both English and a considerable amount of Spanish (perfectly timed translations were included in the projections) and Robert McFarland was a smooth, if underused George.