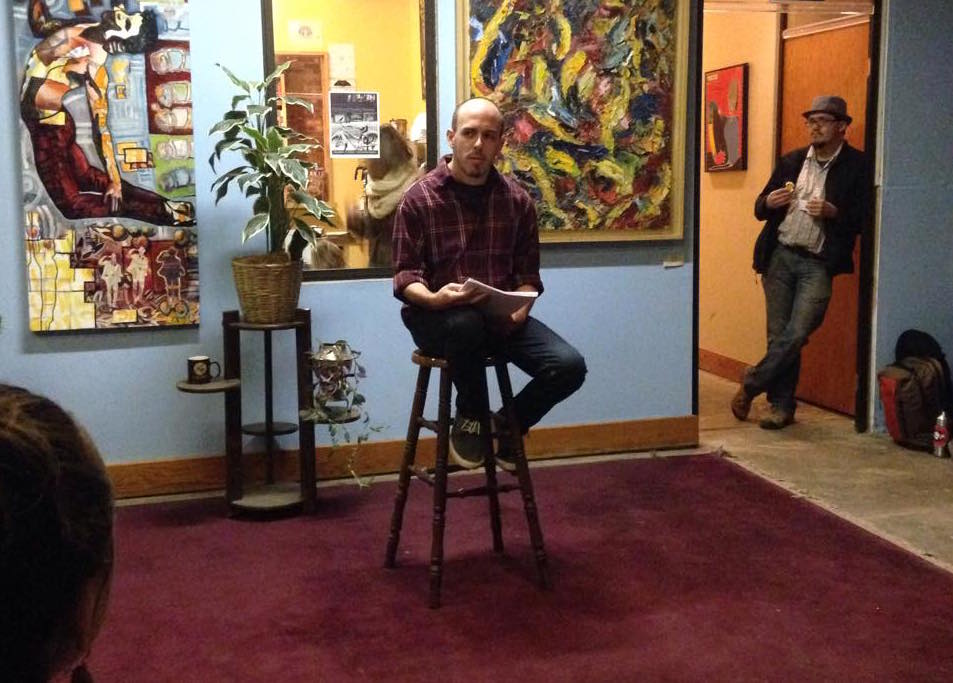 In the back room of McQuixote Books and Coffee at the Tim Faulkner Gallery, a small but lively gathering forms. McQuixote is the host for the inaugural event of the Portland Poetry Series, a monthly reading series devoted to both new and established poets from the Kentucky region. Tonight’s reading is entitled Malapropisms and Mondegreens. The project is part of a movement to support the arts in the Portland neighborhood.  Eventually the group hopes to reach out to West End poets as well.

It’s a free event, but a full event. The mismatched couches and chairs are packed tight.   A small table has been laid out with hummus and crackers and assorted Greek snacks.  The shop itself is the perfect venue for the series as it has character and dimension, an inviting place to read or have a cup of coffee and think. In the front of the shop is a small section selling used books. Art, in typical Faulkner Gallery fashion, covers the walls.

The room fills with young and old. It’s hard enough to gather a crowd for anything, much less poetry, but here we all are. In reality, it’s not so surprising; some of Kentucky’s best poets are in tonight’s lineup. There are also five open mic slots for those less established poets eager to find an audience.

The work this evening is of the highest caliber a small café attendee could ask for, some of it polished some of it straight out of the notebook or off the iPhone screen. The poems are tough, raw, and unmistakably linked by the landscape of Kentucky. The opener for the night is Ms. Wright, whose chilling words and images deal with the issues facing Appalachia and anxieties about nuclear energy. Dr. Omed’s work is also deeply affecting and emotional. Among the open mic performers is John Beachham with Night of the Chupachabra, about a border crossing that turns deadly.

I speak to a few audience members during intermission and there enthusiasm for the project is palpable. One person moved from Asheville, attracted to the art and culture scene in Louisville and excited by the movement slowly arising in the Portland neighborhood.

The next performance in the series is scheduled for January 10, 2015