The Midtown Men are an intriguing mix of retro and contemporary – the high energy quartet of Christian Hoff, Michael Longoria, Daniel Reichard and J. Robert Spencer faithfully recreate the music of the Sixties (ish) through the lens of the successful Broadway musical “Jersey Boys” (which was seen by Louisville audiences in 2012 as part of the Broadway in Louisville series), as the four originators of the lead roles on Broadway. On Saturday evening The Midtown Men joined The Louisville Orchestra, under the baton of POPS conductor Bob Bernhardt, for just shy of two hours of a non-stop, tightly-harmonized, precisely-choreographed walk down a musical memory lane to the delight of an almost-packed house.

These four performers have performed these songs for thousands of performances – as part of the musical and, in recent years, in this concert version.  There is an ease and familiarity both with the material and between them. They banter easily between the songs, their introductions of each other is generous and genuine, they enjoy the others’ solos. And, on Saturday evening, appeared really to appreciate the lush tones of the Orchestra. Two of their band, which was playing with the Orchestra, were introduced: the drummer and pianist. Having enjoyed hearing these familiar melodies enhanced by an orchestral accompaniment it would be interesting to hear The Midtown Men with their seven-piece band, more closely approximating the sound of the original Frankie Valli and the Four Seasons, Drifters, et al.

Hoff, Longoria, Reichard and Spencer are an impressive collective of musical and acting talent that immediately engages with and endears itself to the audience. The first half of the concert is primarily stand-alone songs, most of which brought signals of delighted recognition at the first notes from members of the audience. Winning and self-deprecating stories of their experiences from the Broadway show were strategically interspersed. The concert shifted into high gear in the second half with an extended medley during which the Orchestra and The Midtown Men found their groove together and the material soared through Whitney Hall.

It seems churlish to pick out any one song or performer from this accomplished presentation, but…there was an unexpected moment of bitter-sweet, dropped into the mostly-upbeat tempos and lyrics of the night, that stilled the audience in Daniel Reichard’s performance of “Just My Imagination”, delicately supported by the other members of the quartet. The contrast between this conditional ballad and the confections surrounding it reveals not just this group’s musical capacity but also how their experience as actors informs their interpretation of this material.

Other highlights included, of course, “Oh What A Night”, “Big Girls Don’t Cry” and “Sherry”. And no-one could have been surprised that the big finale was “Bye Bye Baby” – but then there was also just about every other song included in the concert. If this is a period of music that you love, The Midtown Men deliver the sound, the style, and the energy in grand style.

The only slightly ‘off’ note of the evening was the bum rap that Paducah received during one of the chatty moments (the group played at the Carson Four Rivers Performing Arts Center on Friday.). We can only hope that the next time performers head to Paducah they talk with locals who are more informed about the uniqueness of this city. The nationally-recognized artist relocation program, anyone?  As for Paducah being known for quilting, it’s a shame the guys weren’t able to take in the National Quilt Museum to see that contemporary quilt design is more than just great grandma’s log cabin design…

On the other hand, the announcement that J. Robert Spencer made to promote local group Acting Against Cancer‘s upcoming production of Next To Normal was a generous nod to a community production of a show for which he received a Tony Award nomination. Classy. 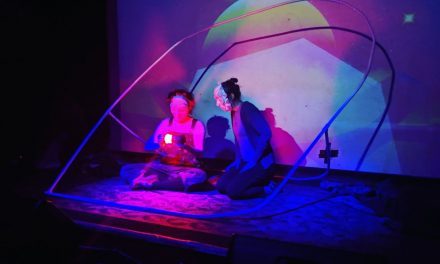