Beyond the Studio: WPA Printmakers and Networks for Innovation in Print Media

Text and photos by Susanna Crum

The prints and ephemera in The Beauty of a Block: Printmakers of the WPA Era, currently on display at the University of Louisville, provide a window into a unique moment in American history, in which women comprised nearly half a workforce employed by the federal government as artist-laborers. From 1935 to 1943, artists in the Federal Art Project’s Graphic Arts Division created a body of original fine art prints that inspired further innovation in the fields of lithography, relief, intaglio, and screen printing. They forged connections between artists, facilitated a national boom in fine art printmaking exhibitions, and created roles for experimental printmaking workspaces. These influences remain today, and are in large part due to the printmakers who were paid a weekly wage – based on experience, not gender – to continue their work as professional artists (Smith 7).

A collaborative effort between five students enrolled in Professor Yasmeen Siddiqui’s Curatorial Methods course, The Beauty of a Block features original fine art prints selected from the University of Louisville’s Hite Print Collection. The multiple originals produced through printmaking processes could be distributed widely and in large numbers. As such, they were ideal vehicles for the aim of the FAP’s program: to reinvent relationships between artist, artwork, and audience. Prints allowed for increased experimentation across media, and allowed artists to adopt commercial techniques like screen-printing as a fine art medium with little risk. This newfound freedom to create and experiment also paved the way for fine art printmaking studios to become the collaborative creative spaces that we see across the country today.

Whether a woodcut, lithograph, screen print, or etching, prints were seen as more accessible and democratic than painting and sculpture. With more people able to view prints on display, the FAP’s goal “to secure for the public outstanding examples of contemporary American art” (qtd. in Gettelfinger 4), became even more important to realize and define. The FAP’s use of urban and rural libraries, community centers, and storefront galleries increased the popularity of traveling print exhibitions across the country. In the following decades, such exhibitions presented innovations in print research throughout American universities, which may have facilitated the development of today’s national juried exhibitions at museums, galleries, and nonprofit arts centers.

Through prints, posters, and secondary source writings, The Beauty of a Block provides a glimpse into the perspectives of women who survived and thrived in exceptionally difficult times. They also make evident the specific and global nature of artistic influences at the time, such as Futurism, Surrealism, and Regionalism.  In The Beauty of a Block, Ida Abelman’s work presents intertwined relationships between man and machine.  Bernarda Bryson Shahn’s Cyrus McCormick’s Reaper (1937) celebrates the prosperity of rural life at a time when the Great Depression was not yet a distant memory (Gettelfinger 5). Like a time capsule of distinct and overlapping voices, the artists in The Beauty of a Block correspond with one another through letters. They share personal and collective experience through the subject matter of their choosing. Miné Okubo, a native of Riverside, CA, was a practicing artist before she documented her experiences in internment camps with humor and detail (Mashburn 10). Artists like Florence Arquin led influential projects in academia and government work. Widely known in the field of Latin American studies, Florence Arquin studied at the National University of Mexico in the early 1940s, taught at the School of the Art Institute of Chicago, and led the Kodachrome Slide Project through the US Department of State from 1945-51 (Meyerowitz).

The FAP’s Graphic Arts Division offered a unique experience for artists, who were used to working in solitude. Instead of competing for sales with wealthy patrons and collectors, FAP laborers paid on a weekly wage developed very different relationships with one another. Wages allowed artists to survive, and develop camaraderie with a focus of creating an American art, together. New dialogue surrounding ideas of cultural democracy were taking root (Oberdick 14) as the artists featured in The Beauty of a Block were working in their New York and Chicago studios. As a melting pot of cultures, ideas, and beliefs, how could artist-laborers create an accessible, uniquely American art? With its variety of distinct techniques and propensity for wide distribution, printmaking was an ideal medium to stage as a testing ground for this goal.

Camaraderie between artists outlasted the FAP and well into World War II, a time when contemporary fine art printmaking made a literal leap from Europe to the US. The widespread exhibition of government-funded prints created markets for and international interest in American printmaking, which developed further as European studio operators moved across the Atlantic to escape war. In 1940, English artist Stanley William Hayter moved Atelier 17 from Paris to Greenwich Village. In New York, this studio became a nucleus for experimental printmaking – the first in the 20th century to encourage artists and artisans to share technical and aesthetic ideas (Moser). Working around one large table, artists worked to redefine what an etching was and could be. These included FAP veterans like Jackson Pollock, Frances Mitchell and Alfred Sessler, and others like Louise Bourgeois, Alexander Calder, and Louise Nevelson. With a responsive market at their disposal, prints made at Atelier 17 continued to push printmaking beyond a specialists’ field and into the public eye, including a landmark exhibition at the Museum of Modern Art in 1944.

Because of the relative freedom in subject matter and lack of technical restrictions, the prints in The Beauty of a Block

exemplify several important innovations that transformed printmaking into an American fine art practice. FAP artists introduced fine art color lithography to the public at a time when the medium was limited to primarily German and French studios. In her color lithograph, Girl with Blue Hair, 1939, artist Blanche Grambs used a variety of drawing materials and printed one color at a time. Other black and white lithographs featured in The Beauty of a Block demonstrate artists’ level of expertise in one of the most procedural and labor-intensive of print media. They painted, drew, and scratched into the grained face of a limestone block that weighed more than 100 pounds. Then they etched and produced editions of prints from its surface – all to exhibit lithographs as fine art when the general public primarily saw the medium as a means to illustrate commercial publications.

With their lithographs, the artists of The Beauty of a Block signaled a lasting shift for lithography in American art. In 1960, printmaker and educator June Wayne received full funding by the Ford Foundation to form the Tamarind Lithography Workshop, Inc. in Los Angeles. A means to once again “rescue” the dying art of lithography, Wayne and her cofounders established goals to create a pool of master artisan-printers in the US, acclimate artists and artisans to intimate collaborations, and stimulate new markets for the medium. While the booming production of the FAP increased public interest in lithography, Tamarind founders desired to break past the high-quality but “illustrative” (Adams) socio-political commentary also associated with the WPA era. Instead, they would create new approaches to fine art lithography, so that artists – many of whom were interested in the directness and immediacy of painting – could approach the medium without constraints in process, style, or subject matter. Today, the Tamarind Institute continues to train professional printers, provide lectures and exhibitions, and participate in major print fairs such as the IFPDA New York and Ink Miami.

The screen prints on display in The Beauty of a Block represent another successful transformation. Screenprinting, or silkscreen, had previously been used for lettering and designs on posters, food containers, and other consumer products. However, in their work for the WPA, artists like Elizabeth Olds, Cleo van Buskirk, Mine Okubo, and Ruth Chaney gave the medium a new role in the American fine art climate. The game-changing 1940 exhibition at the Weyhe Gallery, Exhibition of New Color Prints in a New Creative Medium, is recognized to be the first art exhibition of silkscreen stencil prints in the US (Colescott 5). It was also the first documented use of the term “serigraphy” (“drawing on silk”) – a shift in nomenclature that might have aided in screen-printing’s later expansion as a creative, fine art medium. Screen-printed elements allowed artists like Andy Warhol, Sister Corita Kent, and Robert Rauschenberg to appropriate images from advertisements, pop culture, and newspapers.

The FAP and its Graphic Arts Department created a network for artists to continue their professional work in an environment relatively open to technical and thematic experimentation. These conditions had wide-reaching effects on the work and workspaces of a growing population of artists, and changed printmaking’s role in art markets. When federally funded art programs were dissolved in 1943, many of the hundreds of thousands of artworks created under the FAP were never documented, and some were lost or destroyed (Bamberger). The Beauty of a Block: Printmakers of the WPA Era is a valuable, well crafted, and thoughtful glimpse into the worlds of women who were able to continue their work as artists in a unique economy and time. With its combination of posters, letters, documents, calendars, and original prints, a visitor can learn more about the effort and innovation that made transformative contributions to the role of printmaking in 20th century and contemporary art.

The exhibition is on display in the University of Louisville’s Schneider Hall Gallery until July 17, 2015. An exhibition catalog with essays by curators Megan Bogard Gettelfinger, Whitney Mashburn, Jessica Osterdick, Elizabeth Smith and Leanna Smith is also available.

Beyond the Studio: WPA Printmakers and Networks for Innovation in Print Media

Mashburn, Whitney. “In Her Own Words, Following Her Own Visions: A Closer Look at the Bold and Bright Approaches of Three Women Printmakers.” The Beauty of a Block: Women Printmakers of the WPA Era. Louisville: Hite Art Institute, 2015. 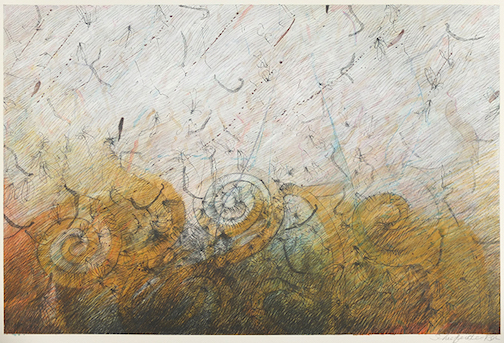